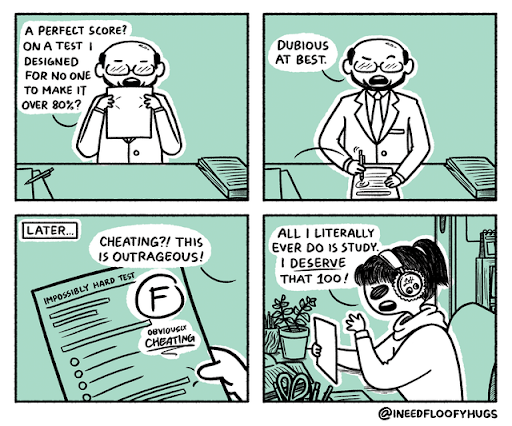 Being a student is just a transitory phase in your life.  Don't view it as life!

I spent 14 years in college - night school mostly - so I have a vast experience at being a student.  But one thing I noticed is that a lot of my fellow students looked at high school or college as being "life" and not just some four-year transition into life.  Perhaps it was because I was working full-time and had a life - owned a car that I paid for, and a house and a mortgage.  I already had a life, being a student was something that I did to qualify me for a better life.

What got me thinking about this was a cartoon I saw about grades and testing.  That and the presence of things like "Rate my Professor" which has reviews from students about their professors and grading policies.   When you read this stuff, you would think that the grade someone got on a test in some course was the end-all and be-all to life and not just some incidental thing that will be long-forgotten in short order.

(It is funny, but my own brother is on "Rate my Professor" and some of his students complained about how he graded on an unusual "Bell Curve" - pun intended).

Life is not school and school is not life.  Sadly, many young people fail to make this distinction.  Yes, it is important to study something of merit and to get good grades and graduate - this shows you have some knowledge and intelligence and can accomplish things.  But it isn't the work you'll do. It isn't the life you will live.  Academia and real life are two different things.  Academia has a use, but is not an end in and of itself.

Well, unless you are a college professor.  And few become that.  And the few that do, well, "Those who can't do, teach" as they say.  Many professors I have known are people who basically never left college as they craved the insular lifestyle of the institution.

This is not to say school is worthless or just a means of parking young people to keep them out of the job market for a few years.  Well, maybe a little, for some.  I am not saying that college is a trade school, where you learn skills, because you don't really learn skills even in a trade school, but rather by doing things.  I took a typing class in high school and learned to type.  45 years of typing every day is what made me a typist, though.  The class was good, the instructor great, but you can't learn everything in class.  It is like piano lessons - as I learned the hard way as a teen, you can't learn the piano from lessons, you have to practice, day-in and day-out to get good at it.  And you have to keep doing it, too.

So school is important, yes, as it can set you on a path in life - or teach you what paths you don't want in life.  But it is not the end-all and be-all of living.  And it is not the only thing you need to learn a skill, a trade, or a profession.  I saw this all the time when I had my practice.  Young graduates would write or call me, looking for a job - convinced that since they graduated from law school and took a few courses in Patent Law, they could instantly start writing Patent Applications with little or no instruction or practice.   What they learned, the hard way, was that every firm out there wanted "2-5 years of experience" in the field, no more, no less.

Sadly, I think a lot of people put too much faith in education, particularly college.  You read all the time about young people with massive student loan debts, who cannot understand why, with no real experience whatsoever, they are not being offered huge salaried jobs in their chosen field of endeavor.  Many cannot bother to figure out if there is even a demand in that field, much as many of my siblings failed to do.

A degree in "Communications" for example, isn't going to make you the next Bryant Gumble.  Experience in broadcasting, a handsome look and straightened and whitened teeth might - along with decades of experience, starting at local stations and (hopefully) working your way up.  But even then, it is likely you'll peak as weatherman at some local podunk station.  And even that would be a major accomplishment - one school (Newhouse) graduates more people every year than there are jobs in the industry.

I think the point is, school is not an end in and of itself.  And sadly, most students don't use the opportunity to find out what they want to do in life, but instead think the study is the goal and the grade is the end-point.

I was lucky, in retrospect, to spend 14 years in night school - working part-time and then studying part-time, getting the job first, and the experience, and then getting the credential that allowed me to keep the job.  Maybe it wasn't easy, but it was a lot more fun, I think, and the real education I received was not reflected in my GPA or what diplomas I received, but in what I actually learned.