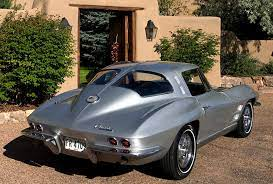 Poverty stories are a form of normative cues.
A $50 Corvette - hey, it could happen to you, right?

In my earlier posting about poverty stories, I recounted how they serve a number of functions.  They reinforce the notion that acquiring wealth is a matter of luck or speculation, and that hard work and saving is for chumps.  So it's OK not to try.

People love to commiserate about what a rotten deal that got in life, these sort of stories just reinforce the notion that those who are wealthy got there through sheer luck or some sort of chicanery. The stories also serve to make the teller feel knowledgeable, having this sort of insider information.

But overall, I think these kinds of stories are harmful to one's psyche. Not only are almost all of them – if not in fact all of them - false, they tend to reinforce very poor normative cues and instill a sense of stasis in those who believe these stories. Not surprisingly, many of them are very popular with pot smokers.

In fact, I recall another one of these stories, which I heard when sitting around smoking bong hits with some of my pothead friends. The story is from the post-Vietnam era and goes something like this:

A guy is looking for a good used car for cheap because he needs something to get to work. He looks in the newspaper and sees an ad with the following listing: "For sale Chevrolet Coupe, good condition, $50."

The guy figures it is probably an old battered two-door Chevy that'll get him to work and back, so he calls the number and a little old lady answers and says that her son had the car when he went off to Vietnam and he died in the war and now she just wants to sell it. He goes to look at the car and realizes it's a numbers-matching fuel-injected 1963 Corvette split-window coupe, with only 5000 miles on the odometer. It's been sitting on blocks in this little old lady's garage since 1968. He buys the car, his hands trembling as he counts out the $50.

It's a great story, maybe a bit of a funny one, but of course it probably isn't true. I mean, it might be true in the sense that people do purchase vehicles and other things from other people who don't realize what they're actually worth.  But once again, this sort of story I think is harmful to the soul. It implies that you can get ahead in life through chicanery and clever dealing or through sheer luck.

But it isn't a means of getting ahead in life.  We can't all count on finding little old ladies selling vintage Corvettes for cheap. There just aren't enough of them out there.  You don't get ahead in life by buying things generally, but by saving your money.  You can't spend your way to wealth.  Only the most astute tradesman can make a living buying and selling commodity items like cars - which is why car dealers have to resort to sharp practice to stay in business.

These sort of stories are driving this whole fad about "barn finds."  If I seen another ad saying a car is a "barn find" I think I'm going to throw up. Another term we're seeing is "barn fresh" - which is something of an oxymoron. I think what's really happening in this day and age is that people are finding old cars and then throwing them into somebody's barn and then hitting them with a leaf blower and a bucket of dust to make it look like they've been sitting a long time. Idiots seem to be willing to pay extra for something that is been found in a barn, or claims to have been found in a barn.

And part of this problem is once again reality television. I am peripherally aware that there's at least one or two of these "barn find" shows out there. I've seen similar shows on YouTube where some guy drives to look at a car that's been sitting in somebody's garage, barn, or out in their yard. He ooohs and awws over some rusted collection of parts, and leads the viewer to believe that these clapped-out junk cars are worth a lot of money.

Sadly, this sort of thing encourages hoarding with the masses, particularly hoarding of old cars. The reality of old cars is rather harsh. If you buy one of these barn finds, you could spend an awful lot of money trying to fix it up to get it to run and restore it to pristine condition. And if you do that, the vehicle be worth about half of what you have into the vehicle. Old cars are really not a profit center.

There are a few exceptions to this rule. For example, if you find a famous race car and rebuild it, it may be worth a lot of money. In fact, it may be worth a lot of money if you just leave it the way it is. If you find a car that used to belong to Steve McQueen or perhaps Elvis, it may fetch a good price because of its provenance. But your grandmother's old Studebaker, six cylinder, three on the tree, with shredded upholstery and rats living in the trunk probably isn't worth a hell of a lot.

But the plebs eat these stories up. They love stories about people finding antique collectibles or original copies of the Declaration of Independence which some rich Hollywood guy is going to pay a lot of money for.  And yes, these sort of things do happen - but not very often. And unfortunately even public television is in on this gag, with their stupid "Antiques Roadshow" - where appraisers tell hopeful people that the junk for their attic could be priceless. Tellingly, though, none of these appraisers are going to pull out their wallets to pay money for any of this crap.

These stories are harmful as they perpetuate the myth that you can get something-for-nothing, and if you are savvy, you can "score" a deal from some clueless dweeb out there. But the only clueless dweeb out there is staring you in the mirror.  I recounted before about the Casita scam.  People want to buy these trailers - or Harleys, Honda CB500s or Kubota tractors, or "side-by-side" 4-wheelers or some other desirable piece of consumer trash.   Problem is, of course, these things are expensive.  The Casita sells for $25,000 new, and used ones aren't much less, even after several years.

So, Clem sees an ad on Craigslist for such a trailer for $2000 and thinks, "this guy doesn't know what he's got!  My $50 Corvette ship has come in!"  And the "seller" tells a tale implying he is ignorant of the value of the thing.  It belonged to his late brother, and he just wants to get rid of it.  If the buyer will advance the shipping costs, he'll have it sent to him!   And sadly, a lot of poor people fall for this scam, be it for a non-existent Casita, Kubota tractor, or a designer dog.  They are lured to their fate by the tale of the $50 Corvette - and they think Genies might actually exist.

The something-for-nothing mentality always leads to tragedy and tears.

Stories like the $50 Corvette are also harmful because people hang onto a lot of junk in their lives thinking it's really worth something. I wrote another piece about this, called That's Worth Something! We have an old rug that Mark's stepmother had, and he said it's a nice rug we should keep it, because it's worth something. But as it turns out it cost $50 new and it's not some collectors item that could be sold for thousands of thousands of dollars.

That sort of thing does happen on occasion. There was an old antique rug at the Arts Association, in the hallway, where people wiped their feet. A rug dealer from Atlanta came in one day and said , "Do you realize how much this rug is worth?" Apparently he claimed it was worth the $40,000 as it was made in the Middle East many years ago by a famous weaver.  We moved it to a better location, but they weren't interested in selling it which to me seems kind of silly. It will probably end up being ruined or thrown away by someone who doesn't realize its worth.  Better to sell stuff like that than hang onto it.  Moths are a bitch.

Most of the stuff we middle-class people have is pretty much junk, though. For example, much of what we consider to be "antiques" is actually machine-made furniture from the turn of the last century. The stuff isn't really worth an awful lot, and much of it is pretty rickety and not very useful.  What's the point of owning an "antique" chair that is so fragile no one can sit on it?  Some designers derisively referred to it  this as "brown furniture" and it really isn't worth much on the open market.

Mark's stepmother \once gave me a book about antique furniture. It was a very exhaustive book listing all the names of the furniture makers from the Revolutionary war era who made some of the beautiful pieces you see in museum homes like Winterthur Gardens. Those are very rare and collectible Antiques, and their value is based on their rarity. The machine-made crap from the late eighteen hundreds and  early nineteen hundreds might be pleasant to look at, but it's never going to command a very high price.

Sadly, I see people hang onto tons of junk like that, convinced that an old coffee can or something is worth a lot because it's very old. It when they die, their children come and clean out the house. All the stuff goes to the curb, and then eventually to a landfill.

This is not to say you shouldn't acquire stuff like this if it's what you want. But if you want a 1963 fuel-injected split-window Corvette, then go and buy one or restore one. But don't expect to see one for sale in the paper for $50 from a little lady doesn't know what it's worth.

Dreams like that are more than pointless, they're evil.