Is AP Biased Against Electric Vehicles? 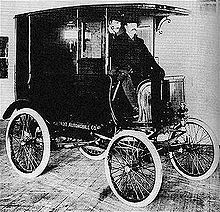 Today, I found out that "AP" stands for "Amalgamated Petroleum"

AP NEWS, May 23, 1901 - PITTSFIELD TOWNSHIP, Mich.  - On the outside, the gasoline powered Ford wagon looks much like its wildly popular horse-drawn version. Yet the resemblance is deceiving. With its new gasoline-powered wagon, Ford is making a costly bet that buyers will embrace a vehicle that would help transform how the world drives.