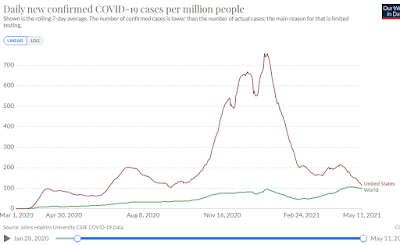 It is too soon to call this over?  Probably so.  But it feels like we've turned a corner - but the rest of the world is catching up.  Click to enlarge.

It is interesting how things have changed in the last few months.  I have to say that I was a bit depressed back in December.  It seemed like this Covid thing would go on forever and the vaccine would never come out.  And then something happened on January 6th, but I don't remember what, and the GOP would like it if you didn't remember either.

But.... then something happened.   We all got vaccinated - well, the smarter people did.  The idiots who thought Trump "won" the election are sitting home and pouting and surfing conspiracy sites. They're still depressed.   But a new year, a new President, and a new Senate, and your faith in humanity is somewhat restored.  But the politics are like the virus - it ain't over yet. 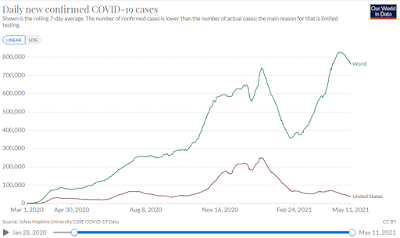 This chart makes it seem like the USA is on a tear - but it is not based on per capita as the previous chart was.

Of course, in that previous posting, I pointed out how people were using the overall infection and death numbers (instead of per capita) to make it seem like the USA (at that time) had a higher infection rate than the rest of the world, when countries like Italy (at the time) had it much worse.  As you can see, statistics, which seem mathematical and absolute, can always be manipulated in a number of ways to tell the story you want to sell - that the virus is out of control, or that the pandemic is already over.

And switching between per capita and overall numbers are just two legitimate ways of manipulating data.  Using scales that are magnified (and not starting at zero) is one sneaky way of making data look more alarming (particularly when trying to hype a stock price).  Better yet, just don't label the axis of the scale entirely - so no one can check your answers.   Or make up metrics, like "wealthy countries" for example (what standard is used?) and if that doesn't work, just make up data.

Of course, people like to look at trends in graphs, and if you look at the graphs, they show a downward trend in infections (and the death rate graphs are similar).  But as we learned from Disco Stu, just because something trends in one direction doesn't always mean it will keep trending that way, whether it is stock prices in 1929 or housing prices in 2008.  In fact, sudden reversals are the norm, as illustrated by our own infection and death rates this summer.

But I am cautiously optimistic we've turned a corner, provided the vaccines work and also prevent the spread of new variants.   The media is making a big deal about vaccine refusniks, claiming that they need to be "persuaded" to take the shot.  Myself, I think if you want to get sick and die, that's your business.   It would thin out the herd to be sure, and if it thins out the MAGA set, so much the better.

Speaking of which, a trip to the local hospital was illuminating.  Our new doctor has an office there, and when you go to the local medical center - a hulking beast with all the charm of the Star Wars Death Star, which is slowly enveloping the entire neighborhood - you realize there are an awful lot of sick people in the world.  And in the United States, much of this sickness is self-induced. We saw people beyond morbidly obese, barely able to walk, or unable to walk, having lost limbs to diabetes.  Damn Sweet Tea - why anyone drinks hummingbird food, I do not know.  One fellow, at least 100 pounds overweight, using a walker, was wearing a t-shirt (you know, dressing up for the hospital) that said something along the lines of  "I'm a patriot, I support the NRA and am against the Demmy-Crats!"

I thought about this, and thought about Mark's late stepmother, who had type-II diabetes and was morbidly obese.  Before she got on her medications, the peaks and valleys in her blood sugar would cause her to go from peaceful calm one moment to raging insanity the next.  She had a lot of anger, to be sure.  And I wonder whether this is, in part, what is driving the bewildering anger we see in people today - on the Left and Right - as they decry how awful things are in the wealthiest country in the world.

Funny thing - the people struggling to get here, and often dying in the process, don't seem to think the USA is so bad after all.  In fact, they think it is pretty keen, compared to their home country. Plenty of work available, lots of inexpensive food, and no one shooting at you or police "disappearing" you.  We fail to appreciate how lucky we are.

Anyway, getting back to Covid depression, after I got my shot, I realized I had put on a lot of Covid pounds, and we started walking 2-4 miles a day.  And since January, I am pleased to report I have dropped 20 pounds so far, both by diet and exercise.  It is hard work, but the upside is, I feel better than before and have more energy and am sleeping better, too.

I think there is a connection between being overweight and anger. I mean, just look at Trump - or half these people storming the capital.  People sit around all day long, watching television or looking into some other sort of screen, and munch on snack foods absent-mindedly.  They watch the "news" and get more and more angry and eat more and more, and develop high blood pressure, clogged arteries, obesity, and diabetes.  And they wonder what happened - after all, they are living a "normal" life, right?

Watching less TeeVee is part and parcel of happiness.  We found ourselves being drawn into the rabbit-hole of YouTube, which over time, has turned into another cable channel.   You can sit down and watch hours of it, and it is not healthy.  It doesn't matter if you are streaming movies or watching Fox News on cable - four hours a day of screen time isn't good.

I also find that I don't enjoy reading "the news" anymore and as a result, don't read it.  Most of the "stories" are not stories, but just crap designed to get you to click.  "Republicans demand that Biden resign!" or some stupid headline like that.  Demands can only be made by people who have leverage.  Hostage-takers can make demands, minority parties cannot.   But it makes for a good headline.  I find that I am not "enlightened" by the news anymore, and if I "miss" a news cycle or two, there was nothing really life-changing that I missed, other than being up on water-cooler chat.

As a result, my blood pressure is also lower, too - not that it was very high to begin with.  It is funny, but I find I can change the readings on my blood pressure by 20 points or more, simply by relaxing my jaw muscles.  We don't realize how much tension we put on ourselves in life.  I wonder whether that is why black people have a history of high blood pressure - it is the stress of being a minority, perhaps.

But look at me, rambling on like Warren R. Schmidt.  You probably want to go cash that Covid relief check and get yourself something to eat!