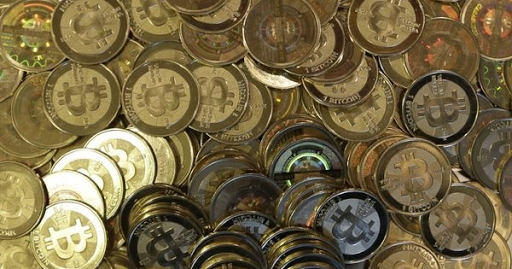 The other shoe drops on Bitcoin, yet again!

A recent article online illustrates two problems (among many) with "crypto" which like "AI" is cool to say but really means nothing.   I have recounted before the dangers of crypto - that people are investing in the concept of scarcity itself.  It is scarcity attached to nothing, other than an abstract concept.

Bitcoin went over $60,000 a "coin" recently, but then dropped into the $30,000 range.  This is not stability or predictability, unless you are the ones manipulating the market for these coins.  Two announcements recently caused the value of the "coins" to drop.

First, the Chinese government warned its citizens not to put money into cryptocurrencies. This announcement illustrates two points itself.  First, the Chinese love to gamble and make wild speculative investments, and the sudden drop in Bitcoin illustrates who is buying these damn things (other than clueless millenials hoping to make a big score).  Second, the Chinese want to offload their wealth into other countries, such as Canada and the United States, because their own government has a nasty little habit of lining billionaires up against the wall and shooting them, if they get out of line.  Bitcoin and other cryptocurrencies are an easy way to avoid foreign exchange restrictions and move "money" around the globe, often for illegal purposes.  This is the only "legitimate" (if you'll pardon the phrase) use of Bitcoin - doing an end-run on government laws against moving currency overseas, or for buying drugs, weapons, or people online.

Second, our friends at Tesla announced that they are not going to take Bitcoin as payment for Tesla cars, which is a neat thing to say after you've made more money in Bitcoin speculation than in making cars - and this solely because you manipulated the market in the first place, by saying you were going to accept Bitcoin for payment!   But we all knew the announcement was hooey to begin with.  It can take hours to process a Bitcoin transaction and cost hundreds of dollars.  It just isn't worth it as a "currency" of any sort.  If Tesla accepts Bitcoin - really accepts it, not just immediately converting it into local currency - it would have to keep a second set of books logging each Bitcoin transaction and then pay suppliers in Bitcoin.  Big problem there - no one else takes Bitcoin, so it is a pointless move.  They would just have to convert the "coins" to local currency and spend that.  And if that is the end game here, then why not just make the purchaser do the conversion at Coinbase or whatever and pay for their Tesla in cash?

There are ancillary reasons as well.  Most Tesla buyers, I suspect, finance their purchase.  Do you accept payments via Bitcoin when it is such a volatile currency?  How does this work for a five year loan?  Are the payments in dollars, but paid in Bitcoin, or do you make a series of regular payments of even amounts of Bitcoin?  Because of Bitcoin was really a "currency" then you would do the latter.  Bitcoin is, of course, not a currency.  To be a currency, you have to be able to spend it, not just convert it to other currencies.

These two events illustrate the Achilles's heel of Bitcoin and other "crypto".  First, Bitcoin et al. have been successful, in a manner of speaking, only because governments have not gotten very involved in regulating them.  But since they are used for so many illegal transactions, it is only a matter of time before they are outlawed.  Recent "Ransomware" events, for example, were all paid in Bitcoin, which illustrates why Bitcoin is dangerous (so is Western Union, for that matter).  If Bitcoin were outlawed in the US, it would be a lot harder to use "crypto" to pay for ransomware.  It is an interesting thought - like the idea of outlawing the $100 bill.  Drug dealers would need tractor-trailers of $20 bills to replace their trunks and suitcases of $100 bills.  But likely they would switch to the Euro or something if that happened, so maybe it is a non-starter.

If more and more countries outlaw or regulate or otherwise control "Crypto" it could be the end of it, at least for illegal uses.  Kind of hard to pay a ransom in a currency which can be electronically traced, which some folks say is already possible with some kinds of cryptocurrencies.

The other problem is manipulation. Since these are unregulated, for the most part, there is very little oversight over these things. If you want to do an IPO, you have to disclose all the financials of your company.  If you go on Twitter (as Musk famously did) and say you have a buyout offer for your company for $420 a share, you could go to jail for stock manipulation (in reality, you get a slap on the wrist, but still, the threat is there).

And yes, you can end-run the SEC with these "SPACs" but that sort of illustrates the point. Do you really want to invest in something that was designed specifically to avoid government regulations regarding disclosure?  It is like turning off the airbag on your car and hoping for the best.  Why would you want to do that?  Why would someone want to avoid disclosure regulations?  Because they are so super-honest they don't need them?

Markets are always being manipulated, but these new vehicles for "investment" are built from the ground-up for manipulation.  As Tesla/Musk illustrated, you can make a quick billion with a couple of Tweets these days.  All you have to do is say Tesla accepts Bitcoin, after you've bought a shitload of it. Then, sell your Bitcoin and announce you changed your mind.  And hey, if the suckers still don't get it, you can buy-back all that Bitcoin for 50 cents on the dollar after you've depressed prices and repeat the whole scenario again!  Are people dumb enough to fall for that gag?  You betcha!

Now some might point out that even though Bitcoin et al. is very volatile, it has gone up in "value" over time.  Just like stocks have their ups and downs, if you look at the charts from 1929 onward, they go up, up, up!   But of course, that assumes your investment timeline is infinity, and none of us will live that long.  In fact, what usually happens, is we have to sell a stock or other investment at a time not of our choosing.  You lose your job, or the market tanks, such as in 2008.  You need the money, so you have to sell.  You are chagrined to see that other people have to sell, too.  So you take a huge loss on your stocks and other investments.   Little people think they can beat the system, but the system beats them.

And sadly, it seems with every market gyration, the little people lose money, and a few people at the top make a shitload.  Many a small investor or homeowner lost their shirt in the 2008 fiasco.  In 2009, those same houses sold for less than half the price the sold for in 2007 - sometimes less than 1/4 the price.  We went down to Cape Coral to see these bargains - by the time we got there, the people with real money - cash and lots of it - had snapped everything up.   You can never win, as a leveraged investor, against the guy paying cash.  The only real option is not to play their game.  Never invest in all one thing, and never invest in hyped investments.

When I was a kid, they had a movie they showed us in the first grade, called "Stranger Danger!"  The message to us was clear:  Never get into a car with strangers, even if they entice you with candy.  You don't know where that car will take you, what their intentions are, and of course, you are not at the wheel.  Safer to take the bus.

With crypto - and other sketchy "investments" it is the same deal. You are enticed with candy - the stories of incredible profits to be made and the FOMO - fear of missing out.  Sure, I might get raped and strangled to death, but hey, that's a full-sized Snickers bar he's holding out to me!  Don't want to miss that!  But once that car door slams, well, all bets are off.

UPDATE:  Musk is at it again, trying to "pump" up the price of Bitcoin with a new announcement that this time for sure, Bitcoin is going places.  Or, he is just hyping something he bought yesterday for half what it was selling for a few days ago.  Will the chumpsters buy in again?  Or will they learn a lesson after being burned by Musk already?  Maybe, maybe not.  The "bump" Musk was hoping for didn't really recover the losses.  This makes me wonder about his other ventures as well.  It would be a shame if the Tesla and Space-X, which are technological achievements, were just the front for a Ponzi scheme....  Let's hope not!