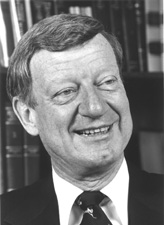 Could a Roth IRA be a good savings account for a rainy day?  Maybe.

The minute I hit "post" on my last posting, I realized I would receive howls of protest from the Roth IRA faithful.  As one reader put it, there is really no penalty in putting your after-tax "rainy day" savings into a Roth IRA, as you can withdraw the money at any time - just not the gains.   Well, not any time exactly, as there is a five year window after you open an account which locks your money in place.

The Roth IRA was created in 1997 and at the time, I was nearly 40.  There was a window where you could "convert" a conventional IRA to a Roth IRA, and many financial advisers promoted this - as they got a "taste" of that conversion.   But it made no sense to me, as I would have had to pay taxes on the converted funds, at a time when I was in the higher tax brackets.  That window has closed, so I guess the point is moot.

The smiling face above is of Senator Roth, for whom this IRA is named after.  I guess he felt we needed to complicate retirement even further.  Sadly, he died a few short years after shepherding the legislation through Congress, so he never saw the fruits of his efforts materialize.

For me, in 1997, and indeed, until fairly recently, I had no "rainy day fund" to cover my ass if I should get into some sort of financial trouble.  And that is a sad thing to admit.  I was funding my 401(k) at my business and was Mark.  But in terms of daily living, we were doing the "paycheck to paycheck" Samba, using credit cards to tide us over when clients were slow in paying.  It was, pretty dumb, in retrospect, considering how much "bling" we had at the time.

But I could see where a more fiscally responsible young person (they exist? Oh brave new world!) might want to start a Roth IRA and fund it modestly for the first five years.  After that, it could be used like a savings account - throw any excess cash into it, and if you need the money again, take it out.  In the meantime, any gains you have are tax-free.   Sounds like a pretty sweet deal.  Sorry I didn't have the financial acumen and discipline to take advantage of it.

On the other hand, the lost opportunity probably wasn't as great as all that.  After all, I was heavily in debt at the time - with four rental properties, plus two mortgages on our house, and (shameful to say) credit card debt.  Oh, and car loans.   In other words, I couldn't have funded a Roth IRA at the time if I wanted to.  If I was smarter back then, I would have paid down those debts (or never taken them on) and maybe then, I could have started a Roth IRA.

It is like the investment "advice" I got when I was in my 20's.  "Get $5000 together and then call me!" one financial advisor said.  Right, like that could happen.

So, mea culpa, my negativity about Roth IRAs isn't all that justified.  On the other hand, if you haven't opened one yet, you didn't miss out on too much, particularly if you are financially stressed.   A dollar put into a Roth IRA is nice and all, but not at the expense of a dollar put into your 401(k) or IRA.

I noted before that one problem confronting young people starting out in investing is that they assume they can "save money" without cutting corresponding expenses from their budget.  A friend of ours (and yes, there were drugs involved) decided to put 10% into her 401(k) at work - without taking 10% out of her spending budget.  Worse yet, she decided that "now that she was saving money!" she could afford her own apartment (WTF?) and increased her monthly cash-flow requirements.  Within a few months, she was borrowing against her 401(k) and ran the account dry, incurring a 10% tax penalty, as well as interest payments.

That, sadly, reflects the financial discipline of most Americans - including myself - particularly when we are young.

So to my young reader who does have financial discipline, I say go for it.  Just don't put more money into a Roth IRA than you might need in the next five years, as it will be locked up.

But for me, already in retirement, already draining that IRA, having a Roth IRA would be nice, of course, but it really doesn't change my tax situation by very much.  I didn't miss much by not starting one or by not converting to one.