Unsolicited Calls to Buy Your Home? 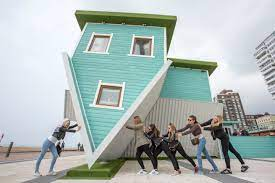 With the real estate market in full-bubble mode, people are resorting to all sorts of tricks to make money on houses.  Some of these tricks are kind of old, though...

I get at least one phone call a day asking if I want to sell "my property."  Some are as vague as that, such as the perky voicemail I got from "Kim" asking if I wanted to sell "my property."  Her number was listed as "private" and I suspect "Kim" is a recording - very well acted, by the way, with pauses and "ums" and whatnot to make it seem almost real.  She left a local number (in Virginia, that is) and I called it back.  At least the number wasn't obviously pasted into the recording as in the last call I got.

When I called back, it went right to voicemail.  There's "Kim" again, asking me to leave a number so she can get an offer to me right away on "my property" - but to be sure it is the right one, could I please tell her the address again?

In other words, this is a robo-call, fishing for leads.  And yes, it is a violation of the do-not-call act, which is why they try to make it seem all folksy and like some individual is calling, and not some faceless organization.

So.... what's the scam here?  Well, "Kim" doesn't exist.  The company making these calls - by the millions - are hoping that one in a million will bite on this and they will sell this "lead" to some sucker who went to a "buy and flip homes!" seminar.  They in turn will make a low-ball offer to the homeowner, who may be ignorant enough and desperate enough to take the offer.  As you might guess, the poor fall for this gag more than most.  Kind of a shame, really.

I have not investigated further, although some of the numbers I have called back clearly went to an Indian call center.  Others were call-center callers calling me, with thick accents asking me if I wanted to sell "My Property."   Mark cleverly responded, "which property is that?  I own several!" and the caller said, in a mumbled voice, "1313 Mockingbird Lane" or something to that extent.

Is this a scam?  Do you even need to ask that question?  They are using fake names, blocked or spoofed Caller ID, and then violating the Do Not Call Act.  That's three lies in the first five seconds of the phone call.  Lie number four is that they are interested in buying your property (I am not sure a worker at a call center in India really can afford to buy any property in the US) when in fact, they are just fishing for leads.

Any business deal you get into predicated on a lie, no matter how trivial, will only go downhill from there.  A famous man once said that.  And here they are lying four times before you even get "the offer" for "your property."   You are going to get screwed, plain and simple, if you do business with such folks.

Note:  This link claims that these calls are "not illegal" and technically that is correct.  The penalty for violating the Do Not Call Registry is that you the recipient of such calls, can sue them and collect damages, provided you can locate them in the United States and they have attachable assets.  A fine distinction on "illegality" but technically correct.

This is not to say that any offer on your house is a scam.  No sirree!  But a real person calling you up and talking to you (and not in a thick Indian accent, with the sounds of a call center in the background) and talking to you person-to-person may be legit - but likely will be lowball.  We sold our house in Alexandria to a developer who bought the entire neighborhood by cold-calling and offering far over market value for the properties.  You kind of have to do that if you want to buy 20 houses on the same street all at once.

In this hot market, many folks have resorted to cold-calling - or writing - to see if anyone is interested in selling.  A friend of ours sent out a letter asking people if they wanted to sell or knew anyone who wanted to sell.  Another friend was checking the obituaries to see if anyone might be looking to sell after a loved one or parent died.  Sounds gruesome, but in a tight market, sometimes that is how far you have to go.

And sometimes, this word-of-mouth technique works.  We heard of a friend who wanted to move to a retirement community, and we put him in touch with our other friends who were cold-calling.  They put together a deal and it went through, which is hard to do with a FISBO sale.

But these are the things telling me we are in a bubble - everyone wants to buy, no one is selling.  People are doing FISBO sales to avoid staggering real estate agency fees.   Folks are looking to buy-and-flip houses because prices are rising so quickly.  Everyone is hoping to make a quick buck, but few will do so.

I say this after living through the bubble of 1989 and the bubble of 2008.  Same shit, different decade, only each time this washing machine of greed wobbles out of control, it seems to do more damage than the time before.  This time could be worse than before, particularly if interest rates go up (which they will, eventually) and if people are still foolish enough to take out adjustable-rate mortgages in an era of record-low mortgage rates.