Layaway - Poverty Financing At It's Best! 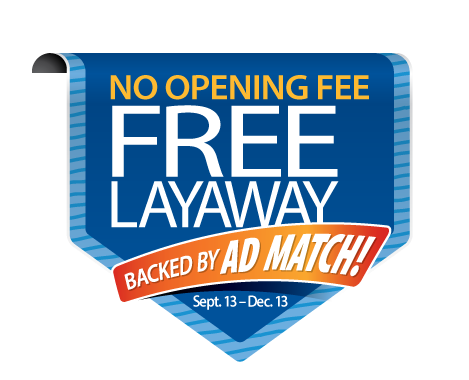 Layaway was the poor man's (or woman's) installment plan.

Years ago, I met a person who told me they had a number of items "on layaway" at the local Walmart or Kmart or something like that.  I had never really understood layaway, only having heard of it and my Mother dismissing it as something poor people do - or did, anyway.  Today, they just get into intractable credit card debt.  But so does the middle-class.

How did layaway work, and why?  And does it still exist today?  The answer to the last question is, Yes, it does exist, at least at Walmart, but only during the "holiday season" except for jewelry.  A number of other stores have layaway plans as well.

How it works is pretty simple.  You decide to buy something, but don't have the cash to pay for it.  But you get paid next week, and the week after.  Why not have the store "hold" the item for you, while you make a number of installment payments on it?  Once it is paid-for, you can take the item home.  For the store, it means another sale to someone who might not otherwise have bought.  It does mean staffing the layaway desk and keeping inventory of purchases and physically storing them, in most cases.  There are real costs involved in running a layway plan.

For the consumer, particularly the poor who have bad or no credit, it allows them to buy expensive items "on time" without having to finance them.  Of course, the astute observer would ask the question, why not just save up for the item and then buy it?  And the answer is twofold:  First, these sorts of folks don't have the discipline to save up money, so layaway becomes a sort of forced savings plan.  Second, by the time they have the money saved up, the item may be out-of-stock.

But unlike financing, you don't get to take the item home right away.  And of course, what happens if you don't make the rest of the payments, within a certain time period?  My friend I was talking to back in the day told me he had a number of items "on layaway" and was making payments on them.   But a couple of items, he changed his mind about, so he stopped paying on them.  In that case, the layaway item reverts back to the store and all or some of the money paid is lost.

Most stores charge a fee for this service, and another fee for cancelling.  Others, such as Walmart, offer "free" layaway, but if you renege on the deal, you lose your 10-20% deposit.  That's a pretty hefty price to pay for changing your mind.  Better off to go ahead and buy the damn thing and then return it for store credit or a refund, if you can.

What boggled my mind was my friend was willing to walk away from layaway deals and leave cash on the table.  For a modest amount of money down, he could "shop" and "buy things" but never have to deal with the messy business of actual ownership.  And for a month or two, he could pine for his layaway items and think about them, before backing out of the whole process.  In a way, it was genius - reducing shopping to its essential part, the dopamine rush of buying things.

Sort of like my friend with the row of shopping bags that I recounted in my last posting.  With layaway, companies make money if you change your mind.  In other situations, not.  When people become serial buy-and-return customers, it costs the company a lot in terms of restocking labor, not to mention products that need to be marked-down (if someone buys a seasonal item, for example, and returns it at the end of the season).

Lowes and Home Depot don't mind me returning things I buy and don't use, provided it is only about 10% of what I buy.  They know that a generous return policy often provokes a sale - buy ten plumbing fittings, for example, use the ones you need and that fit, and then return the rest.  Beats going back again and again, when you realize you need one more street elbow.  But in that situation, the amount returned is only a small portion of the purchase - or the amounts purchased over time.

But others are less amused by this process.  Amazon famously banned some users who bought item after item, only to return them with Amazon's generous return policy.  In addition to re-stocking costs, they had to pay postage to ship and return.   What's more, some cheeky folks would buy things and use them and then return them.  So, for example, someone buys an expensive video camera to make a professional video of a friend's wedding, and then returns the camera for a full refund.  That's sort of cheating.

But getting back to layaway, is it really a worthwhile thing?   I think not, at least for most folks.   It is not really a way of "financing" a purchase, as you don't get the item until you have paid for it.  It would be better to just save up your money for such a purchase, and thus not risk losing your deposit (or paying a cancellation fee) if you change your mind or are unable to complete the purchase.  Not only that, but many stores charge a fee for layaway, so you are doubly coming out behind.  Given that the time period for layaway is only a few months, you are paying a high price to "finance" a purchase, if the store charges a layaway fee.  Some stores even charge a fee if you pay early!

Of course, saving up money for a purchase requires discipline, and if you are using layaway, maybe it is a sign you need to work on financial discipline more than anything.  My Mother had it right - layaway is poverty financing.  Poor people make poor choices, which is why the are poor.  Of course, financing the same purchase with a 20% credit card is an equally bad choice.

Not buying stuff is, of course, another alternative.  Some of the layaway programs almost make sense - to pay for a big-ticket item like a piece of furniture (although some stores exclude furniture from layaway items).  But then again, given the short window often provided to "finance" the purchase, does it make any sense?

Other items, well, you have to wonder why you'd bother.  Walmart allows layaway for jewelry, which certainly is a want and not a need.  You can live without it, and if your finances are so sketchy that you can't afford a bauble, maybe you need less baubles.  I haven't really addressed jewelry in this blog, but suffice it to say that we don't spend a lot of money on it.   You can accessories with inexpensive jewelry, and quite frankly, most people can't really tell the difference.  And who are you trying to impress?  I will have to write about that some other time.

Some of the stores that do layaway seem quite bizarre.  Hallmark stores?  You're going to layaway a birthday card?  I suppose that program is used for more pricey items, like the "collectibles" they sell.  Again, a smarter choice would be simply not to buy.

But I suspect a lot of people put things on layaway and then forget about them, like my friend.  And the stores make money on these deals, either by keeping the lost deposit, or charging a cancellation fee.  I suppose there are people who literally forget about layaway purchases or walk away from hefty sums of money by not going back to get a refund of the monies paid (minus the cancellation fee, of course).  It is pretty much pure profit for the company, minus the stocking labor cost.

Retailers offer raw deals - but that doesn't mean we should take them.   People assume that since the rent-to-own furniture store is so popular (based on number of billboards and television ads) that it must be a normal thing to do - a normative cue.  Similarly, since every big store has a "layaway" department, it must be a normal thing to do.  Leasing a car, a payday loan, or the pawn shop - someone must be patronizing these businesses, right?  And all the folks buying "Crypto" can't be wrong - right?

But a funny thing - every store I visit online who has a layaway program - such as Walmart - hints that maybe you should finance your purchase instead.  I suspect they get a kickback from the finance company, and that this is more lucrative than even layaway, as there is little additional labor involved.

I suspect, going forward, you may see layaway fade from the scene.  Historically, it was prevalent in mostly lower-end and middle-class stores, and with the demise of Sears and Kmart, two of the largest players in layaway are gone.  Walmart seems to be curtailing their involvement as well - in fact they dumped layaway more than a decade ago, and brought it back during the last recession.  It is something of an anachronism - a relic of a bygone day before credit cards and credit scores, when the vast majority of people couldn't borrow money.

Today they can - but probably shouldn't!