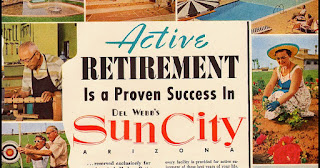 Modern Retirement has existed for only about 50 years or so.  Many folks are still figuring it out.

A reader writes that many people choose to retire in high-tax areas "up North" to be close to family, and that moving to Sun City Arizona or The Villages in Florida can backfire, as your kids and grandkids won't come to visit very often.  I suspect many move to these places for that very reason - to get away!.

But she has a point.  We see, all the time here on "retirement island" the trend for people to move "back home" to be "closer to the kids" as they get old and infirm.  The children and grandchildren all have jobs and responsibilities and can't fly down or drive six hours to visit Mom and Dad on a regular basis.  When you get halfway into dementia or break your hip, you might want to have someone around who you can trust, to take care of you.

For me, this is not an issue.  My parents are in Arlington.... Cemetery.  And so are Mark's.  My siblings are all older than I am and will likely predecease me.   And no offense, I don't feel close to any nieces or nephews to trust any of them, particularly the ones with criminal records.

But for others, moving "back" to be near "family" is a thing, and I suspect about half the people we've known on the island here have or will do so.  The other half either die here or go to an assisted living center on the mainland or on an adjoining island.  With a few, a family member actually moves nearby and they move in with them.

As I noted before, however, the whole concept of retirement is a post-war conceit, and one that really only came into being in the 1960's and 1970's.  So it is only about 50 years old.  It was only after the war that people started living long enough to retire, and thus collect on pensions and social security.  Plus, retirement age for many companies was lowered at that point - you could be "vested" in a pension in as little as 20 years, which was convenient as that was about the age you were forced in an "early-out" to retire, as the economy crumbled.

It was in the 1960's that "retirement communities" started to spring up and Florida turned into a retirement haven, followed by Arizona.  I watched a documentary on Netflix about South Beach, Miami.  It was a collection of old Art Deco hotels from the 1930's that fell upon hard times, as the new hotels (like the Fountainbleu) opened up.  Old folks from New York City (mostly Jewish) settled in these cheap hotels on South Beach, because you could live there for only a few hundred a month.

Of course, that was then.  Today, that whole area has been turned into a nightmare of nightclubs and high-end hotels and apartments - and gridlock "cruising" almost every night.   I have no desire to go back there anytime soon!  I mean, it was fun to go and all - and stay in Gloria Estfan's hotel and gorge on Cuban food and stone crab....

But slowly, one by one, the orange groves were plowed under to make retirement communities - everything from trailer parks to "over-55" park model communities, to planned communities such as The Villages (which did start out as a trailer park - today you can buy a multi-million-dollar home there).  People started retiring with fat pensions and social security at an age where they were too young for the nursing home, or even shuffleboard.  You could sell your house "up north" and take out enough cash to buy nicer house with a pool, in Florida.  Many did.

Over time, however, the economics have changed.   The price of housing in Florida has gone up, to the point where you could spend more on a house in Florida than what you would get for your place "up north" - unless you want to move further and further inland.  All the good spots are taken.  And as property taxes have gone up, the equation has changed even moreso.

Others have taken to the road as "full-timers" in RVs, only to discover that can be more expensive than owning a home in one place.  Often they end up "landing" somewhere, and that somewhere ends up being a run-down trailer park.  There are no easy answers.

Of course, many retirees, particularly women, want to be near their families so they can dote over these magical creatures they call "The Grands!" or grandchildren.  It is a second bite at the parenting apple, and a chance to spoil kids that they don't have to care for on a daily basis. As I noted before, many of these old folks use this as an opportunity to subvert their own children's parenting efforts and will run down their own children in the presence of the grandchildren.  What sort of mixed-message does a kid get when Grandma tells them their own mother is an incompetent?   Sorry, but I have little patience for meddling grandmas - or grandpas who buy the kids the Playstation that Mom and Dad said they couldn't have.  But I digress.

There are no easy answers, which is one reason we have "stayed put" where we are.  We travel by RV and visit places all over the country and have yet to find a place better in all respects than where we are now.  Florida has nice weather - but not in August - but also has too many people and much higher property taxes.   Up North is nice in the summer, but geeze, I'm done with snow for a lifetime after getting up at 4AM to deliver newspapers in 10-below-zero weather.   The West is nice, but the blazing sun in Arizona will literally melt your car.  I guess the RV thing, for now, has been the best of both worlds - allowing us to see parts of the county when they are at their best and most comfortable.

But when I get old and infirm, there is no "moving back" to be "close to family" as there is no family to move back to.   It is a scary proposition, in some regards, but life is kind of scary and unpleasant in parts, particularly the last parts.  Hey, why do you think in those horror movies, the monsters are usually shown as creaky old people?  Because getting old is indeed the scariest thing we will experience!

And of course, even if you have "family" that is "back home" - do they really want you moving back?  I've seen this play out both ways. I recounted recently a friend who should be selling her three homes and moving into the in-law suite her daughter built for her.  The daughter wants to "take care" of Mom, but Mom still wants her "independence" whatever that means (freedom to fall and break your hip and have your cats eat your face, I guess).

Others are not so lucky. I recounted before a friend "up north" who tried to help his spendthrift Mother, putting new tires on her old car and paying off her credit card debts and getting her into Senior housing.  The next week, Mom shows up in a new (used) sports car she bought from friendly buy-here-pay-here motors.  "Mom, you could have at least let me take the tires I bought you off the old car - I need them for my Volvo!"

Turns out, his many siblings (practicing Catholic family) wanted nothing to do with Mom, as she was (a) quite crazy, (b) a total spendthrift, and (c) utterly manipulative.  She would place herself in positions of peril (usually economic) and then plead for her offspring to bail her out.  Most got tired of it rather quickly.  If you see a friend or family member about to drive their car off a cliff, make sure you are not in the back seat!

Of course, it is hard to see a family member drive off a cliff, but on the other hand, my experience has been they think they know what they are doing - and think you, in fact, are the one driving off the cliff!  So better off to let them do their own thing, most of the time.

So, what is the answer?  Beats me. There isn't one. What works for one person doesn't work for another.  Moving back to be close to your kids (or retiring there) is great, if you like your kids and they like you.  For others, it may be more economical (and more fun) to move elsewhere.  Some end up snowbirding - spending half the year near their family, and then moving down to a retirement community after Christmas to play golf.  If you live near Orlando, the kids might actually come to visit, too!

But in a way, for me, it is liberating not to have to deal with "family" in making my life-choices and decisions.  Yes, we visit Mark's brother in Florida on occasion, and plan on seeing them this summer in Maine.  But quite frankly, they get sick of us after a few days, so we try to keep the visits brief and fun. And since they are older than both of us, it is unlikely they could "take care" of us down the road, and in fact, quite the opposite is more likely.

In the meantime, well, we try to enjoy ourselves.  Speaking of which, time for a bike ride and picnic!  I have such a hard life!