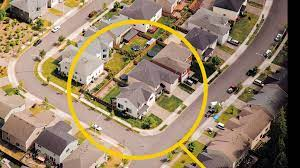 Is a corner lot a good or bad thing?   It depends on the zoning.

I recounted before how our house in Virginia was sold for nearly $700,000 in a market where it was worth maybe $400,000 on a good day.  It was on two deeded lots, so the buyer was able to buy the whole block, tear down the aging post-war houses, and put up two, million-dollar mini-mansions in the place of each house torn down.  It made economic sense for everyone involved - the County, the State, the sellers, the buyers, and the developer.

Years later, we went back and the neighborhood is largely unrecognizable - which is something that happens to most neighborhoods over time.  Every house eventually sold, except for one "refusnik" who said "it was the principle of the thing!" not to take a half-million dollar payout.  That and the corner lot houses.

The corner lots in that neighborhood were as large as our double-lots, but because of zoning setback requirements, you not only couldn't build two houses on them, you couldn't even really build one mini-mansion.  The houses on the corners were all, without exception, set way back in the lots with huge useless front lawns, and tiny, tiny triangular-shaped back yards.   The owners had no privacy in the front (but a huge lawn to mow) and no privacy in the back, as their house was about ten feet from the rear property line and looking right into a neighbor's house.

Clearly, those "corner lots" were not advantageous, yet when they were sold new, they commanded higher prices.  Some developers claim that corner lots are desirable, but I am not sure why.  In addition to the setback problems, you get traffic from two directions, as well, as a stop sign, with squealing tires and whatnot going on all the time.

There are exceptions, of course.  In our neighborhood today, a neighbor with a corner lot was able to build an enormous garage for his boat by putting a new driveway on the "other" street his house is on.  So he has driveways on two streets, and having a corner lot allowed him to have access to the rear of his property so he could put in a boat garage.  For him, the corner lot worked out.  For others, not so much.

Only a few blocks away, another neighbor has the "house in the corner" situation going on - his house is set back on an enormous lot, to the the point where his back yard is a tiny sliver of land.  No room for a pool, or even a play set.   What's worse, is that his house is deemed to be on a "main road" that was planned decades ago, but never built, other than a one-block dead-end section, and local zoning ordinances require an even greater setback on that corner - hence the house being pushed back to the rear of the lot.

Zoning is weird that way.  One reason corner-lot houses have huge set-back requirements is that they want to keep the "sight lines" at an intersection clear.  For major roads, these set-backs can be rather draconian, and my neighbor was unlucky enough to buy a house on what was supposed to be a major road.  A big portion of his enormous front lawn isn't even his - it is the "right of way" owned by the State.

Setbacks and zoning are things we don't think about when buying a house.  We tend to get distracted by the fancy kitchen or the color of the paint in the living room - trivial items, really, in the greater scheme of things.  It is only when people try to put on an addition or build a garage that they realize they are literally "backed into a corner" in terms of zoning setbacks.

If you are buying a house, it pays to look at your "plat" carefully and inquire about zoning rules.  Maybe you don't plan on adding on right away, but the guy you sell the place to, someday, might want to, and if the house is situated such that you can't add on it decreases the value of the property.

This can be particularly true on corner lots!