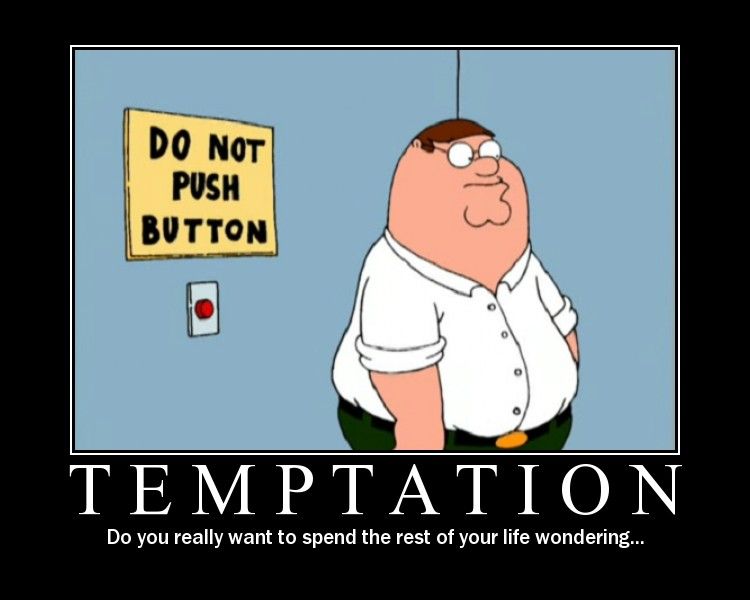 Resisting temptation is nearly impossible to do.  So just don't place yourself in positions where you are tempted.

I spend the day today stuffing money down rat holes.   We had a small inheritance recently, and it was sitting in my savings account for a week before I realized what a bonehead move this was.   First of all, the savings account is tied to a checking account which is tied to a debit card that has already been hacked once.  And while the bank would likely make good on any fraudulent transactions, it might get dicier when there are six figures involved.

So where did I stuff the money?   Well, I paid Uncle Sugar first - for 2014 taxes, and all of 2015.  One less freaking thing to worry about.  And of course, State taxes, too.  They I put small amounts into all the different accounts, stocks, and funds I have.   Most of these have no trading fees, so it is possible to add small amounts without incurring a high overhead.   The balance will go into a new Merrill Edge account (more on that in another posting).

Voila.  In about a couple of hours, the money is all gone.  Safely out of reach of...myself.

Why is this?   Because as humans, we are weak.   You cannot go on a diet and keep dishes of candy all throughout the house and rely on "self discipline" not to eat them.   Similarly, you can't order a pizza and then promise yourself to "eat only one slice and save the rest for later" because that just won't work.   You will sit in front of the TV and by midnight, you will have watched six hours of really bad television and scarfed down an entire pizza.   Again, I know this from experience.

The same is true for credit cards.   I read all the time on financial blogs, where stupid 20-somethings (are there any other kind?) boast about how they got a "great deal" on a miles or cash-back or bonus points credit card, and they are really smart financially.   When you ask them about the 15-25% interest rate, they chirp, "Well, I never plan on carrying a balance, so that is not an issue!"

Well, of course, no one plans on carrying a balance on a 15-25% interest credit card, do they?  Only an idiot would do that.   Everyone who gets one of these "rewards" cards plans on paying off the balance every month.

Guess what?  Few do.   Eventually, this high-wire act fails, and you end up with a balance and a staggering interest rate.  Pretty soon, you are paying $75 to $100 a month just in interest payments, which of course makes paying off the balance nearly impossible.

Discipline and self-control are illusory things.   Yet so many people rely on this strength-of-last-resort as their primary means of self-control.   If your finances are set up this way, I suggest you may be in for a world of woe, in the future - perhaps the near future.

As I noted in an earlier posting, a young lady recounted that she inherited $66,000 and then blew it all within a year or so on clothes and other junk and wondered where it all went.

Was she an idiot?   Was she stupid?  Was she weak?  No, not really.  She was just human.   The problem was, her Dad helpfully took her down to the local bank and instead of stuffing that money in a hard-to-get-at IRA account, put it into an easy-to-access and low interest CD.   Having that money only a checkbook or a debit card away meant that she was tempted to spend.

And we all give into temptation - even those ministers who rail against it on television (you know, the kind that snort coke and hire call-boys).

Temptation is mighty strong.  The best way to deal with it, is to not put it right in your lap.   Don't buy candy and pizza and cokes and cookies, if you are on a diet.   The idea that you will use "willpower" to not eat these things is idiotic.   Your own track record is proof enough of that.

The same is true with credit cards.   A frequent-flyer "miles" card with a 20% interest rate and a 30% "penalty" rate - and  $25,000 credit limit, is nothing short of a bomb waiting to go off.   Once you sign on to one of these deals, it is only a matter of time before you have your own personalized credit card fiasco land in your lap.   Again, ask me how I know this.

For most folks, the fallout from temptation is that they spend years paying off debts - or end up in bankruptcy.   The real damage, of course, won't be felt until they retire - by will or by circumstance - and realize they are basically broke.

Because in the greater scheme of things, it is not that hard to tear through $100,000 in just "miscellaneous spending" and end up broke in short order.
Newer Post Older Post Home