Can So Many People Be So Wrong? 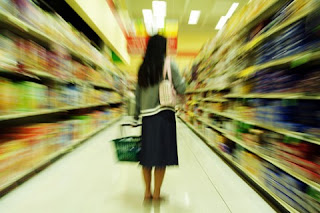 A trip to the supermarket yields an epiphany.


I was at the Winn Dixie today, on a mission.  I was told to buy two baguettes and a bag of onions.  Mission accomplished.  When you have a shopping list, the siren song of the supermarket falls on deaf ears.   I am pretty immune to the allure of the superette as it is.

The modern supermarket is an amazing thing, as I have written about before.  It is a machine designed to get you to spend more than you intended, and to buy things you didn't intend to buy.   While it is a monument to excess consumption, it is also a tribute to the successes of our capitalist society.   Granted, there are a plethora of poor choices you can make in the supermarket, but you can also make good choices.   I am not sure two baguettes and a bag of onions is one of them, but there you have it.

What amazed me, was when I went to the checkout, I had to go down the cereal aisle.   It was almost an entire aisle in length - 45 linear feet or more of colorful breakfast cereal boxes, most of them aimed at kids, and most of them being sickly-sweet concoctions loaded with sugar and carbs.

Even unsweetened cereals (that are just grains) are just starches - carbohydrates.   While they won't kill you, by themselves they are hardly a healthy breakfast.   Sugar-loaded cereals?   Poison, basically.  And even cereals with healthy-sounding names are often loaded with sugar.

Walking down this aisle, past one colorful box after another, stacked floor to ceiling, I thought to myself, "Do people really buy this shit?"  And the answer is, of course they do.  Most people do.   I've seen people jam this crap in their shopping carts, along with huge bottles or cases of soda-pop, plus cookies and candy - all for their kids, or even worse, themselves.

And it struck me that an awful lot of people are eating very poorly in this country, which if you are even peripherally aware of what is going on in the world, is no surprise to you.

Could so many people be so wrong about so many things?   Of course they can.   They usually are.   One the drive home, I went by the McDonald's, which, as usual, has a line around the block.   People eat there on a daily basis - and worse yet, feed it to their kids.   They see nothing wrong with a diet that is all starch, sugar, and meat.

Why this disturbed me was that as a kid growing up, I was taught that the consensus was the greatest thing in the world - the foundation of our Democracy.   While a lot of people may have wacky beliefs at one end of the spectrum or the other, the vast majority of Americans would reach a consensus as to what the best course of action is.   Today, we call this a Wiki, as in Wikipedia - which is an example of where a consensus works, at least a lot of the time.

But in other areas of our lives, what we seem to "agree on" often doesn't make much sense.   An awful lot of people eat very poorly.   They spend too much on junk and don't save for retirement.  They consider themselves clever for clipping a coupon, but then squander thousands of dollars by leasing a car or refinancing credit card debt.   Americans make a lot of poor choices - and they do them in large numbers.

The cereal aisle is just an example of large numbers of Americans making really poor choices.

This is not to say we should ban cereal or force people to make better choices.  No, only that it points out that you can act rationally in an irrational world and make better choices and do so much better than the great unwashed majority of the USA.

I am being a bit sarcastic here, of course.   But there is a nugget of truth here.   The great unwashed masses seek out bad deals en masse which means that good deals are often even better as they are under-appreciated by the great unwashed, and thus their prices are even lower.

But the real epiphany I came away with was this:  It is tempting, sometimes, to think that maybe the bulk of humanity has it right - and maybe we in the minority are wrong.   After all, the well-worn path must be there for a reason, right?   All those people can't be wrong all the time?   Maybe they're right?

But a trip down the cereal aisle tells a different story.   An awful lot of people make horrifically bad decisions, most of the time.   The secret to wealth and success is no secret - don't be one of those people.
Newer Post Older Post Home