What do you do when your kid wants a toy that is not properly gender-oriented?


When I was about 5 years old, my Dad took us to the hardware store to buy birthday gifts.   Back then, some hardware stores had toy departments.  My brother and I both had birthdays in March.  The hardware store had a room upstairs with toys in it, and we loved to go there.  They had a huge display of Tonkas.

They had several CJ-2A Tonkas on display.  The Army version came in olive drab (more of a green actually) and had a cheap plastic "canvas" roof, and, I think, a machine gun.  They also had a civilian version, in Harvard Red, I think and maybe one in blue.  And then, at the end of the table, in all its Gay glory, as a Tonka DJ-3A Surrey Gala, with authentic white-walls, pink and red striped upholstery, and a pink and white surrey top that even had a white fringe on it!

Immediately, I said, "Daddy!  I want THAT ONE!!!".  My Father shifted his weight from one foot to another.  Already he was acutely aware that I "ran funny" and had no skills in catching a football.  My instinctive impulse to pick the pink jeep was too......obvious.

"Well, why don't you get an Army one, like your brother?" he said, and I replied that it would be dorky if we both got the same Jeep.

Frustrated, he took a Tonka dump truck off the shelf.  "Well, how about this truck instead?"

This provoked cries of resentment from my brother.  "How come Bobby gets a dump truck, when all I get is a Jeep?"

Sensing that arms escalation could result, my Father backed down and picked up one of the other Jeeps.  "Come on, how about THIS one?" He said, nodding vigorously.  "GET THIS ONE!" he nearly shouted.

I started crying. "I want my pink Jeep!"  People started to look over at us to see what the fuss was all about.  I may have been young, but I realized that embarassement was my hole card.

"All right!  All right!" my Father relented, grabbing the jeep off the shelf and trying to hide it under his arm.  'Yea!" I shouted as we went to the cash register.

My father paid for the Jeeps, avoiding the curious looks from the cashier.  All the way home, I played with the surry top on my Jeep, while my Father muttered under his breath.

Of course. my Pink Jeep was far from safe.  My Tonkas were constantly "at risk" from my brother and his friend George.  They would take the Tonkas and divide them up into two piles at either end of our room over the garage, which had a large lineolum floor.

They would then each take a Tonka from the pile and fling it across the floor, aiming for a head-on collision with an opposing Tonka.  They would then admire the "accident damage" and repeat the process.  If this did not produce enough mayhem, they would fling the Tonkas onto the driveway below from an open window.

I left the house that mornnig to visit a friend. My brother and George were already "playing Tonkas" when I left.  I told them, clearly, that under no circumstances was my Pink Jeep to be used as part of their sick games.

"Oh no," my brother smiled, with that sickly smile of his that I now know means he's lying through his teeth, "I would never DREAM of using your Pink Jeep!"

"Never," agreed George, also with a smirk on his face.

No sooner than I had stepped out the door was my precious Pink Jeep taken off the shelf and singled out for special abuse.  Over the next two hours, things were done to the Pink Jeep that make the treatment of Al Queada supects at Guantanamo look like patti-cake.

When I returned later in the day, my Pink Jeep was in ruins.  The surry top was shorn off and the fringe destroyed.  The spare tire was mising, as were the hub caps.  The windshield frame was twisted into a pretzel.  I screamed bloody murder.

When My Father got home, I threw a fit.  Ordinarily, this would be a "whipping offense", but for some reason, my Father seemed subdued, even happy, that the Pink Jeep was no more.  But my Mother interceded.  Tommy couldn't destroy his little brother's toys with impunity and get away with it.

So over the knee he went, to the associated hollaring and wailing.  But for some reason, it didn't seem my Father's heart was in it.  Beating his kids was his favorite pastime, but tonight, well, Tommy got off easy is all I can say.

I never forgot the injustice of the Pink Jeep episode.  40 years later, I found one for sale on eBay for $20 and I bought it.

Fie on my brother.  Fie on them all! 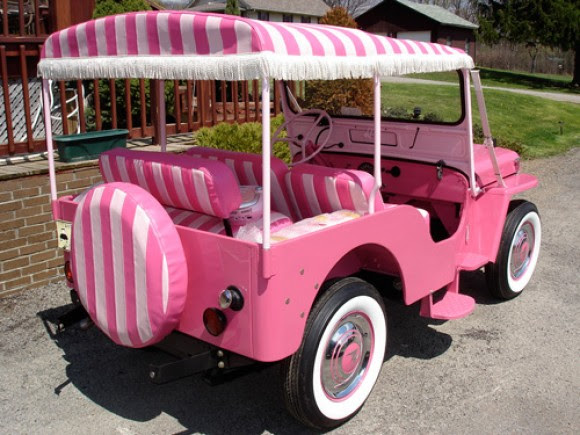 Elvis had one.  I always wondered why he was so attached to the "Colonel".

If you can find one of these in a barn, unmolested, they fetch a pretty staggering sum, as CJ-2A's go.  20 grand or more.

The Tonka Version can be found on eBay all day.  Some even in good shape. I paid $20 for mine.

Most of the pink ones were sold to girls, who put them in the closet still in the box, and only years later did they gay uncles take them"out of the closet" and put them on e-bay.  (One dreamer is asking $750 for his.  If so, this is the best ebay purchse I ever made, I only paid $20 for mine).

The standard Tonka jeeps (army or civilian) are ironically, harder to find in decent condition, as most boys smashed theirs up.
Newer Post Older Post Home