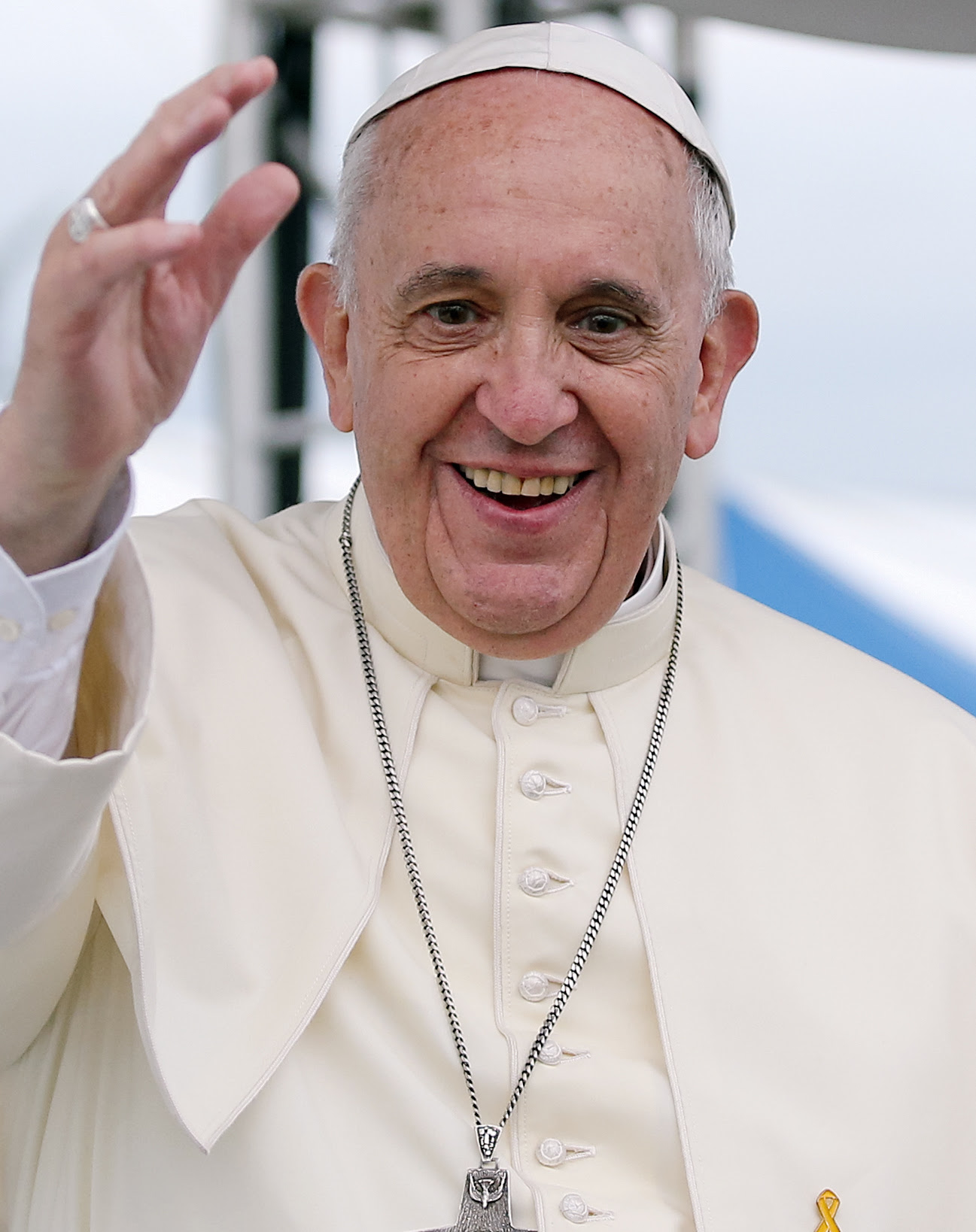 Pope Francis has turned out to be a disappointment.
Wipe that shit-eating grin off your face!

In my Apologist for Terrorism posting, I noted that NPR was sort of hinting around the edges that the editors of Charlie Hebdo "had it coming to them" but of course didn't want to say it out loud.   Well, leave it to the Pope, of all people, to actually say what NPR was thinking.

Until recently, Pope Francis was viewed as a breath of fresh air in the Vatican - an outsider who would clean house and mop up the Vatican bank mess, the pedophile priest scandal, and also all the petty corruption that has plagued the holy see for decades.

And it seemed he was going to liberalize the church - reach out to minorities, make peace with Gays, and maybe even let up a bit on abortion.   This was shocking to church conservatives.   He was also going to attack social injustice and income inequality in the world, apparently embracing Liberation Theology.   Suddenly, it seemed, it was cool to be Catholic again.

But all that changed the other day with one statement.   And in retrospect, given the violent bloodthirsty history of the Catholic church and its own intolerance of dissent, it was a forgone conclusion that the Pope would "go there".

While Jesus said "Turn the other cheek", Pope Francis says, "punch the other fellow in the face!"  The contrast in philosophies is startling.  Pope Francis is not a Christian in any sense of the word.

"But I say unto you, That ye resist not evil: but whosoever shall smite thee on thy right cheek, turn to him the other also."  (Matthew 5:39)

He referred to Alberto Gasparri, who organizes papal trips and was standing by his side on the plane. If "his good friend Dr Gasparri" says a curse word against my mother, he can "expect a punch," the Pope said. (USA Today, January 16, 2015).

Of course, the favorite way the church did away with dissenters was to burn them alive, which sort of makes a good old-fashioned Muslim beheading seem humane in comparison.

Protestants, Jews, Muslims - all were fodder for the Vatican meat-grinder.


The antics of the Catholic church, almost from its inception, bear criticism and comment, if not outright mockery.   From at least the Borge Pope onwards, the Catholic church has been marred by corruption, violence, and intolerance.  The latest scandals in the church are not isolated incidents, but just another in a continual string of abuses dating back, well, to the middle ages, perhaps before.

But according to Pope Punch-In-The-Face, we are not allowed to discuss this, challenge this, or criticize this - or even make a humorous cartoon about it.

Well, I hate to break it to Pope Punchy, but mocking religion is what we do best, here in the United States.

Mocking religion is an industry in the USA.  Get over it.

Whether it is making fun of Scientologists, or the excesses of fundamentalist Baptists, or just utterly smearing the Mormon faith, we lead the world in mocking other people's beliefs.  USA!  USA!  USA!

And yea, we mock the shit out of Catholics.  Nuns, in particular, we seem to find particularly funny.


Nuns have always been a target for satire.   I guess the Pope already got even with John Belushi.   Dan Aykroyd is no doubt on Opus Dei's hit list next.

One thing we are in this country, though, is equal opportunity mockers.  No one is really safe from the satirist's quill here.  And oddly enough, it seems that most religions, while maybe offended by these comedy bits, just shrug it off and move on with life.

The Mormons, as far as I know, have not declared a fatwa on Trey Parker and Matt Stone, for their Broadway musical.  And this I find particularly noble, as the Mormons, historically, have been persecuted and murdered for their beliefs, which is why they ended up in Utah - just to get away from the rest of us.   And they willingly gave up polygamy, which was a central tenet of their religion, only to see gay marriage later legalized.

It is tasteful to mock religion?  Perhaps not.   But satire is one form of social criticism, and in the radical Muslim world any form of criticism is not permitted, just as any representation of the prophet Mohammed is prohibited.

The question remains, why is one religion allowed to squelch dissent or any critique of its beliefs?  And more importantly, why is the Pope defending this?

Islam, like any other religion, has its faults (Oh, I went and said it!  Fatwa on me!) and they should be discussed and addressed.   If you don't like the discussion, then don't read it.   Just as the Mormons are not going to change their beliefs because someone made a comedy about them, why should Muslims care if a non-believer (or even a believer) does not believe?

In essence, the terrorists have already won, here.   We have already drawn a chalk outline around Islam, roped it off with Police tape, and put up signs saying, "No Trespassing".   We have given Muslims special rights that no other religion has - mainly the right not to be criticized.

And if Muslims have this special right it will only be time before other religions want in on the deal.

And that, in short, is where Pope Punchy the First of That Name, is going.   He doesn't want his church criticized, mocked, investigated, satirized, or otherwise "insulted".  From reforming outsider to entrenched insider, in less than two years.  That has to be some new sort of record.


And this is why I do not follow any organized religions (or organized anything, for that matter).  Organizations quickly turn to self-preservation mode, and whatever reason they were founded for is quickly forgotten in the name of survival and expansion.   Islam may be a religion of peace, but some would like to see it forced onto the entire world, and are quite ready to die - and kill others - to do it.

And it is as offensive, I suppose, to many Muslims, to see their religion distorted this way.   The problem is, the people distorting it don't see it as distortion, but getting back to the original message - much as fundamentalists in the USA do, even though many of their belief systems (such as end-times theology) are a recent innovation.

It makes me very sad and not hopeful for the future of humanity.   The threat today is not from ISIS, or the Taliban, or the tattered remnants of Al Qaeda, but from people like Pope Francis, who see nothing wrong with hypocrisy.   People who rather than "turn the other cheek" would punch you in the face.

It is just really, really sad to me that a Pope would say this.

UPDATE:  Sadder, still that others go along with it.   A large number of people in this world believe that their beliefs and actions are not up for criticism or debate, and if you challenge them, they have the right to physically assault you.   This is sad, too.

Some people get it.  Piers Morgan does, apparently.   Ronald Lindsey does too, although he seems to leave open as legitimate, the right to hurt people if they say bad things about people you love.  I guess this means you can shoot someone for calling you a "motherfucker" as they insulted your Mother.  Sadly, the commentators to his article (on Huffington Post, no less) seem to feel otherwise.   This is what troubles me - liberals seem to be the first to defend the rights of the honor killers.  I guess it is all part of "respecting diversity" or something.

While it may be true that in a criminal case, you can raise someone else's verbal provocation as part of a defense strategy, it is not an absolute defense to a crime.   The "Fighting Words" doctrine, which many have bandied about is an entirely different thing - it deals only with government censorship of free speech that is deemed to be "fighting words" and even that exception has been watered down to the point of extinction.