Are We Ahead of Europe? 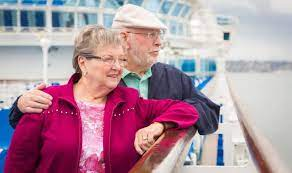 
We are on a mailing list for AMA river cruises and Viking river cruises (the latter being the only one endorsed by Dr. Evil!).  While they sound like a lot of fun, one thing that keeps me from going (besides the staggering prices) is that in the brochures, all the folks they show are mostly older white people.  Most of them look like my Dad, and going on a cruise with my Dad is not my idea of a fun time.

But it struck me that in all the brochures, they show nary a single person who is not white - other than the smiling, helpful natives in the African and Asian tours.  And it struck me that in America, there would be hell to pay if you tried to market your services using brochures that were so mono-chromatic.

I remember back in the 1970's, most American companies did the same thing.   If you got an advertising circular, brochure, or other document with photos of people in it, they were all white folks.   And some people started to get upset about this.   I talk a lot about normative cues here and how they affect the way you think - and how subtle they are.

For example, the "flesh" color of band-aids is a very subtle cue as to what "normal" skin tone is - and the band-aid people are not happy when you bring this issue up.   Sure, a lot of people say this sort of thing is trivial, but in a larger sense, it really isn't.  If you are told, every day of your life, that you are not "normal" and are less desirable just because of who you are, it does tend to sink in, over time.  Trust me.

So starting in the late 1970's, Corporate America started to diversify its photo stock.   No longer was the Sears catalog all-white, but the occasional black or Asian person or family was shown.   And before long, this became the norm in the US, as companies found out it not only didn't harm them at all, but that it was good for business.

Our European friends like to chide us all the time for having "racial problems" but when you look at their record, you easily see they are behind the times.   And I am not just talking about how races are represented in brochures.   Most European countries are mono-cultural, and as such, tended not to have racial problems, that is, until recently.   Yes, many black American performers went to Europe in the 1900's and found a more receptive audience there.   But that was because there was no large black population in Europe, so racial discrimination was not the norm.   When you are a novelty there is no threat.

Since then, in more recent times, a large number of people from the Muslim world have migrated to Europe, and our better-than-us European friends have started to show their true racist colors.   Things that would never be dreamed of in America, are routine in Europe.  Banning Mosques, banning headscarfs, and the rise of right-wing parties (that actually are winning votes and seats in Parliments) are just a few examples.   More and more racist incidents are popping up, and of course, Anti-Antisemitism (Europe's dirty little not-so-secret) is again on the rise, even though the Jewish population of Europe has largely been diminished since the last pogram.  That is one place the Europeans surely have us beat - antisemitism.  Hell, they invented it.

To me, this is ironic, as Europeans look down their noses at us Americans - calling us primitives, violent, gun-toting, and racist.   We are painted as rapers of the planet, war-mongers, colonialists.   In short, everything they want to be.

But a funny thing.  The US has been on the forefront of environmental regulation.   We required pollution controls on cars decades before they were required in Europe.   Catalytic converters were standard here in the 1970s, but not mandated until the 1990's in some European countries.   Much of the science behind ozone depletion and global warming came from US Scientists, not European.   In fact, the greatest "contribution" our European friends have made is the "Climate-gate" e-mails.  Nice going, Europe!

In terms of auto safety, we were ahead of Europe in mandating airbags in cars, as well as other safety features, such as side-impact requirements.  Of course, one reason we are ahead in terms of auto safety is that our accident rate is so much higher than in Europe - nearly double.  But when you look at it in terms of miles driven, while still higher, it is on a par with some European countries like Spain.  Nevertheless, while we obsess about self-driving cars here, Europeans are better at actually driving.

Granted, we have not embraced socialism and high taxes to the extent Europe has.  Our society is more of a dog-eat-dog world, where you have to work to get ahead.   But that does not mean we utterly lack any sort of safety net.  The number one medical problem we have among the poor in America is obesity, not malnutrition.   There are a host of government programs and giveaways to the poor here in the States.  We are not exactly a feudal system.

And yes, we are nuts about guns in this country - or at least a vocal minority of us are.  But despite its vaunted gun control laws, one does read about mass-shootings and other gun-related crime in Europe.  And France beats us, in terms of suicide rates.

Now some might argue that the reason for so much religious tension in Europe has to do with the fact that in America, the Muslim population is more moderate - fewer "radicalized" Muslims live in the USA.   And I would have to agree with that.  But I think one reason this is, is that our culture tends to smother other cultures, and since we are more inclusive than our European pals (who concentrate recent Muslim immigrants in suburban high-rise ghettos), perhaps American Muslims tend to feel less alienated than their European counterparts.

SMOKING is of course one area where we are light-years ahead of the Europeans and Asians.  While we have banned smoking in restaurants, bars and airplanes, our European counterparts have been behind in every way.   And oddly enough, we export a lot of tobacco and tobacco products to Europe, so you would think that general anti-Americanism would be enough reason to get them to quit.  But they still smoke like chimneys over there, and often in public spaces where you can't get away from it.

Well, that's what I get from reading a European river cruise brochure.   I am not sure I am going to go on one anytime soon, only because it costs about $10,000 for a week's vacation, and to me that sounds like an awful lot of money to spend on one week.   For a lot less, I can rent a boat in Europe and have a lot more fun that sitting around with a bunch of old white people, whining about the service and going on guided bus tours.

There are cheaper ways to go boating in Europe, and you aren't stuck on a cruise ship with a bunch of old white folks!
UPDATE MARCH 2022:  AMA pulled the original image from this posting, apparently.  I went on their website and lo and behold, not a single old, white-haired person in sight!  In fact, it is all younger people and a mixture of races!  Maybe someone read my posting...?
Newer Post Older Post Home