Spotting a Bad Deal at 100 Paces 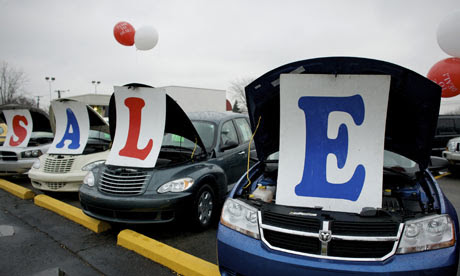 Huge signs and bright-colored balloons.  Do you really think this is where bargains reside?


One problem with "doing the math" on things, is that it takes time to do math as you have to sit down with a pencil and paper, research things online, calculate compound interest, and catch small things like taxes and insurance, when calculating what constitutes a bargain.

It is tedious.  It is time-consuming.   Most people just can't do it.

But there is a shortcut method to figuring out whether something is a raw deal or not, from 100 or 1000 yards away.   And it ain't hard to do.   The more heavily something is hyped or advertised, the less likely it is to be a good bargain.

For example, the local cable company inundates me with flyers about all the "Great Bargains!" they have for me, if only I sign up for Cable Television.   Paying money to watch advertisements has never been, and never will, be a bargain of any sort.   Even if Cable TV were free it would be a bad bargain, as the advertising on basic cable makes watching it toxic.

But they keep at it - offering bundles and discounts and "FREE installation!" and free this and that - all with the air of a carnival barker.

The local "Monster Motors" hypes heavily on the radio, television, and in the newspapers.   And that right there tells you that they have no real bargains.   That and all the fine print at the bottom of the ad.  When the words "SALE!" and "FREE!" are in 3-foot-high letters, and the real terms of the bargain are in four-point type, well, do you really need a decoder ring to figure out this is a shoddy deal?  Of course not.   You should be able to spot this as a raw deal from a mile away.

As I noted in my last posting, Happy Talk is another sure sign a raw deal is coming down the pike.  We heard this nonsense during the buildup to our Real Estate bubble, and the Canadians are using it on themselves right now.   Everything will be fine.  This time it's different.   There are no such thing as bubbles.  When you hear insane talk like that, whether it is from gold bugs or bitcoin "experts" it is a sure sign you need to head toward the exit.

Speaking of exits, ever tried to find one in a Casino?  Good luck with that.   Any deal that is as easy to get into as falling off a log, and as hard to get out of as major root canal, is probably a raw deal.   With a stroke of a pen, you can lease a car.   But if you decide, midway though the lease, you no longer need the car, well, guess what?  You are screwed.   And even if you keep it all the way though, they sock you with back-end charges and then try to get you to roll these into a new lease.   It is like trying to quit the Mob.

A friend is chagrined that they are paying too much for cable.   But they have a two-year contract.   They can quit, sure.  But they will have to pay nearly half the remaining value on the contract as a penalty fee.   Does this strike you as a sound bargain to be making?   One that you can't get out of?

The best bargains present themselves.  A secondhand car for sale by your neighbor down the street is not hyped in 3-foot-high letters or shouted on the radio or television.  There is no fine print.  There is no huzzah and hooray.   It is just a used car - what any car is, the moment you buy it.   And if he took care of it, chances are, it is a better bargain - as reflected by the 15-25% lower "private party sale" prices in KBB, NADAguides, or Edmunds.

I use GoPhone from AT&T.   It is not very heavily advertised, compared to say, the regular cell service.   If you log onto the AT&T site, they are not going to steer you to GoPhone, but to an all-inclusive voice/data/texting plan with a new iPhone folded into the price - of $60 to $415 a month, depending on how many GB of data you want and how many phones for your family.

It is not hard to spot the raw deals.   Anything expensive, overpriced, or unaffordable has to be sold to you and that is what salesmen do - sell things to people who ordinarily wouldn't buy.   And the way they do this is to appeal to your vanity and also to convince you that it is a normal thing to do - a normative cue.

For example, you may wonder why so many people paid so much for houses and condos during the real estate bubble of 2009.   Why did they buy?   They went to an open house one weekend - one festooned with signs and balloons.   The salesman for the developer (who may not be a real estate agent, and thus is not bound by even their weak code of ethics) takes the young couple for a tour of the manicured development and shows them an end-unit townhome with fancy appliances and countertops.

It all looks so swell!   But can they afford such luxury?  Are they worthy of this?   The salesman assures them this is so.   They have a bank lined up with a new "novel" type of mortgage which will make it "all so affordable!" and since units like this are in such high demand, they can always sell the house and make a profit!   Besides, all their friends and co-workers are buying them!

And the latter may be true.   Every person who buys the luxury condo and then has a party to show it off to their friends and co-workers, ends up being a salesman for the idea of the luxury condo (or townhouse, or house, or whatever).   They create new normative cues for their peers, who now expect that level of living as part of their lives - even if it is not a sustainable economic model.

Flashy looking houses, flashy looking cars, they seem nice and all, but they are expensive to buy, to own, and to maintain.   And often they are horrible bargains.   And the way to spot them is, that, well, they are flashy.

Maybe the Amish have the right idea.  Or maybe that is how their ideas were formed.   When people go after bling and hype, it distracts one from the underlying bargain.   Your neighbor paints his buggy red, and suddenly, you have a competition to see who can have the fanciest buggy - and you both end up bankrupting yourselves.

This is not to say, of course, that you should never buy things you enjoy or like - only that the louder the message selling such things, the greater the chances are you are being ripped off.
Newer Post Older Post Home