Why America-Bashing is a Dead End 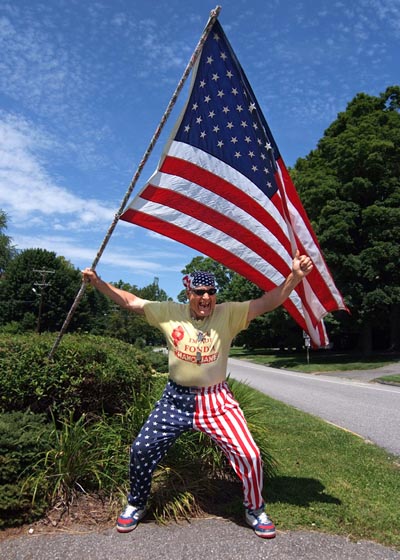 
If you go online or meet a lot of people, you tend to see they fall into one of two groups these days.  On the one side (Right) you have people who think America is the best country in the world (which it is) but not only that, never does anything wrong or has any faults - or needs any improvement.  These are the sort of doofuses who like to chant, "USA! USA! USA!" and believe that mindless "love of country" is what being a patriot is all about.

What sets our country apart and what makes us a "county" is the political system and our people.  When we fight wars, it is not for the dirt and rocks, but for this ideology.  Uber-patriots simply don't understand this.

On the flip side of the coin (on the Left) are the America-bashers.   No matter what the debate is about, they immediately assume that America is at fault, is a horrific place to live, and that our government is vile, corrupt, and should just be overthrown.

And the funny thing is, their opinions are not that much different that the folks on the Right.   Both want the government abolished or overthrown, both hate huge segments of the population of their own country.   Both are insane.

Why are both Uber-Patriotism and American-Bashing dead-ends?   Well, like with conspiracy theories, they don't take you anywhere but down.   If you go through life thinking your country is vile and corrupt, that everything is awful and bad, and that secret conspirators are responsible for your lot in life, you will be depressed all the time.

Worse yet, you will become passive and take on a condition known as Learned Helplessness.   Rather than take charge of your life and do something with your life, you'll just hunker down in your survival bunker or your bong-water stained futon in your Mother's basement, and commiserate about what a rotten deal you got out of life.

Externalizing your problems never solves your problems.  It is the tactic of losers everywhere, though.   You say that all your troubles were created by these great unseen forces or faceless organizations with names like "Wall Street" or "the GOP" or whatever.   And since the probability of you changing the government or Wall Street or the GOP is nil, then by definition you will never solve your problems.

So it is a convenient way to just give up on life - classic weak thinking - and use that as an excuse not to accomplish anything.   Indeed, why even make the bed when the Illuminati have stolen all your hard-earned dough?  Or maybe it was those welfare queens.

This sort of thinking also will make you mentally ill.   It will cause you to be depressed, and eventually, you will start to lose friends and end up alone.  And as you descend into the madness of the conspiracy theorist, the cognitive dissonance between reality and your fantasy world will grow greater and greater.

The reality of the USA is far from either of these extremist views.   We are hardly a perfect country, but then again, we are hardly the spawn of Satan, either.  The US has always been wary of "foreign entanglements" since its founding, and we had to be dragged into both World War I and World War II.   And when the latter war ended, well, we were the last man standing - not bombed or bankrupted by the war.   We became a world power by default.

And we quickly discovered that isolationism wouldn't work in the post-war Cold War era.   The Soviets were spreading world communism, and like it or not, we had to respond.   And both the US and the Soviet Union found out the hard way that proxy wars (Vietnam, Afghanistan) could be devastating and crippling, even to a "superpower".

Now granted, we still meddle in world affairs - to strengthen our positions and defend our strategic interests.   Funny thing but every other country in the world does this as well.   The Chinese are trying to steal islands from the Vietnamese.  They meddle in Africa and Asia.   The Russians are, well, I don't have to explain what the Russians are doing.   Every country in the world fights for a piece of the pie and also tries to expand its influence, build up alliances, and negotiate treaties.   We've just been more successful at in in the last century since we were the last superpower left, after two devastating wars.

So the criticisms that the US throws its weight around too much are somewhat hypocritical.  Other countries do the same thing - or would like to, if they had the weight to throw around.  Still others, such as the Brits, used to do the same thing, but have since lost their influence (so you get a lot of sour grapes from that bunch).

But however you perceive our weaknesses and strengths, it does little to obsess about them or to constantly run down your own county.   To be sure, it is important to be politically engaged.   Vote - and donate money to the party of your choice.   That is how you can "change the world" effectively.

That and be successful in your own right.   Whining about Wall Street "taking all your money" because you signed odious student loan documents isn't going to change your lot in life.   You signed those papers, you got the worthless degree.  You chose this.  And oftentimes, the amounts of money people are whining about is less than the cost of a moderately priced car.  Hardly a "mortgage on your life" by a long shot.

Concentrate instead on what you can change in your life, as opposed to complaining about things you can't change.

And mindlessly blaming America for everything that is wrong in the world is not only incorrect, it is a dead-end.