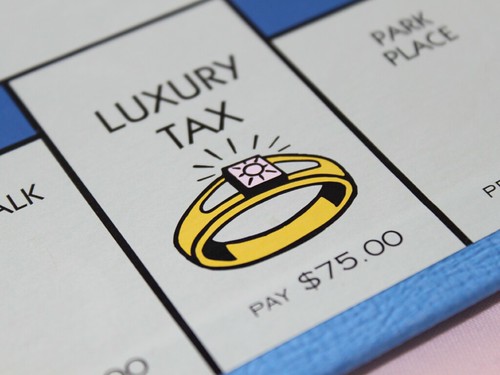 What the heck is "Luxury" anyway?

We just returned from a trip to South Florida to see the Art Show at Cocoanut Grove.  It was fun, but it was also interesting.  One of the sponsors was Lincoln, which like Cadillac, is trying to figure out exactly what it stands for.

In South Florida, a lot of stuff is sold on the premise that it is "Luxury".   Luxury cars, luxury condos, luxury apartments, luxury SUVs - whatever.   The phrase is so trite and overused, one wonders what it means anymore.

Marketers have been using "Luxury" to sell us stuff since time began.   After the war, Chevrolet sold cars with imaginative names like "210" or "Master Series".   It wasn't until they came up with the "DeLuxe" moniker that sales took off.   It was the same old car, of course, with a few gee-gaws and trim pieces, and some optional "luxury" items (like a dome light) made standard.   But sales took off - people wanted to be able to project the image that they could afford to spend more than their more plebeian neighbors.

And since then, special "Luxury Editions" and whatnot have sold cars and other goods.   And we buy them - in bulk.

Technically speaking, the term "Luxury" traditionally applied to anything that was not a necessity.   So if you had "all the luxuries" in life, you were doing pretty well, as opposed to the slug who was just getting by with oxygen, food, and water.  But over time, the term has taken on a new meaning - and a meaning that really defies explanation or definition.

Luxury goods today are often the same goods sold in more plebeian forms, but under a different brand name and with a slightly different trim or decoration.   In cars, this is readily apparent, and the problem for Lincoln and Cadillac.  You can look at those cars and see their Ford and Chevy counterparts hiding underneath the glitz.    The doo-dads and gee-gaws are mostly all available as options on the lesser cars, so there is less and less distinguishing these "Luxury" brands from their base models.

And often, "Luxury" goods are far less reliable and durable than plain-jane products.   A fancy Swiss watch can cost more than a nice car, but it doesn't really tell time any better than a cheaply made Japanese digital watch.   In fact, the latter is often more accurate and doesn't need winding.   And if it is lost, stolen, broken, or damaged, you can simply throw it away and get another one - and do this almost daily for years, and still not spend more than the fellow with the Swiss wind-up.

In short, there is no technical advantage to owning the fancy watch.   It is purely cosmetic.  It is purely for showing off.   When you have the fancy watch, and people notice it, they understand that you have enough money to buy a watch costing thousands of dollars (or at least think you do).

Handbags are a similar thing.   A Kate Spade bag is nice and all, but at the Art Show we were at, we saw handmade bags made by leather crafters that were far superior in terms of aesthetic design, quality of leather, and quality of construction.   However, the lady next to us, who had a bag that said "KATE SPADE" in inch-high letters, was not about to buy some no-name bag, even if it was more beautiful and better made.   No one would know how much she spent on it, so what's the point?

The same is true of home appliances.   My neighbors bought a Sub-Zero built-in refrigerator, which easily cost twice what I spent for my side-by-side.   My "cheap" refrigerator cost less than $1000 and never needed maintenance or repair for a decade.   Theirs had the Sub-Zero repairman at the house several times over that same time period.  And mine had ice through the door.   In terms of features and performance, the "cheap" refrigerator from Home Depot was a better deal.   And as I have learned over the years, even cheaper refrigerators in the sub-$500 price range, perform just as well as the $1000 ones.

And so on down the line.  Today, people are not content with "look at me!" kitchens and baths anymore - they have to have the "look at me!" laundry room as well, complete with odd-colored front-loading washers and dryers on $500 pedestals.  But these machines, despite costing far more, don't wash clothes any better, save that much energy, or are more reliable (actually less so).   So why do people do it?

Luxury today means only that you spent more on something and not that the item in question is inherently better or longer lasting.   And the entire point of "Luxury" today is to show off to other people your apparent wealth.   What is the point of being wealthy if you can't rub someone else's face it it?  That is what marketers are selling these days.

So what is the point of all this?   Well, to begin with, the word "Luxury" should trigger a response in your brain - if you want to save money, that is.   View it as you would police tape roping off a crime scene.   As soon as you see the word "Luxury" attached to any transaction, chances are, some marketer already has his hand in your wallet.   It is an emotionally-laden word, used to sell products and nothing more.  And it usually is designed to sell you things you don't want or need.

And they way they do this is by appealing to your most base and vulgar instincts - the instinct to think of yourself as "better" than other people, in one way or another.   What the BMW buyer of 40 years ago was buying, was a sporty performance car.   What the BMW buyer of today is buying is a status symbol designed to tell other people, "Look how much money I have!" - even if they don't really have that much.

It is an ugly and repulsive part of human nature, but one that is present in all of us.  The desire for status in our society is very strong.   And as I noted in another posting, status-seeking behavior can take on all sorts of weird forms.   The hippie environmentalist claims "caring about the planet" as status, even as they speed in their Prius.   The anti-status person claims "not caring about status" as status - because they are morally better than you for not caring.

But most Americans go for the plain old status kind of status - owning things to project an image about themselves.  And this is where the marketers have us, with the selling of "Luxury" appointments in nearly everything in everyday life, from grocery shopping (at the designer store) to designer coffees (at Starbucks, natch!) to what sort of electronic jewelry you carry about (logo facing OUT of course!).

I try not to fall into the anti-status as status trap.  I am no better than anyone else in that regard, having bought my share of "look at me!" luxury items over the years.   What I have learned, however, is that no matter how much (or how expensive) the crap you buy, there is always someone with more crap or more expensive crap so you can never "win" at this game.

Moreover, in order to play you have to keep spending, spending, and spending.    When I had a fancy BMW convertible cruising down A1A in Fort Lauderdale, I was king of the world.   But then a decade goes by, and it is just another used car, of course.   Still a fun ride, but not something the valets are going to leave out front, at the restaurant (the ultimate status trip!).

I live on an island now, where all the houses pretty much look the same.   Since I don't drive or go to the office, no one notices what kind of cell phone I have or how fancy my car is.  And in fact, this ends up being sort of better than status-seeking, as you blend into the background in life.   Nobody will notice you in a beige Camry, and that has certain advantages.

And my experience is probably pretty typical.   It is easy to sell "Luxury" goods to a 30-something who is starting to make good money.   It is a lot harder to sell to a retiree.   And that is one reason why marketers love the younger demographic - they will spend more on status items, up to the point of bankruptcy.

For old people, "Luxury" means not having to work, or having to worry about money.   That is, indeed, the ultimate luxury.   And it can't be bought, either, only saved up for.