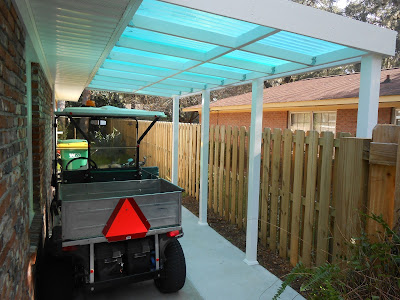 Doing things and making things - altering your environment - is a sure way to fight off depression and learned helplessness.

I mentioned before about learned helplessness.   It is a situation where people (or animals) start to believe that no matter what they do they cannot alter their environment or outcomes in life, so they just give up and cower in the corner, helpless.

Our society today is primed for this.  We live passive lives, sitting in front of video screens, whether at work or at home, consuming media content in the form of television, movies, or video games.  Few people today actually know how to do things.   Most can't even cook, but rather send out for food or go to restaurants.  Many no longer even clean their homes of mow their own lawns, but hire people to do these things for them - spending money they don't have and feeling useless in the process.  The only thing they know how to do is complain a lot about poor service or the products they purchased.

It is a recipe for depression.  That's why I am not jealous of lottery winners - most end up depressed and broke.  Unearned income just leads to depression, as you didn't actually do anything to earn it.  Even Donald Trump can say he got some satisfaction from seeing hotels and casinos go from plans to reality - even if half the time he went broke.

Doing things is important, whether it is baking a cake, writing a poem, washing your car, or just mowing the lawn.   But increasingly, in our society, we hire a lot of this work out - and as a result, end up more depressed than ever.  Sitting on the couch is not good for you, mentally or physically.

Some readers have written me, chiding me for retiring from my Patent practice, which I found to be unsatisfying and increasingly, anxiety-inducing.  Sitting in front of a computer screen for eight hours a day was literally killing me.   "What will you do all day long?  You'll be bored to death!" they said.  Well, so far, the days have filled themselves quite nicely.   And since I have been winding down my practice for over a year now, it is not a sudden stopping of work that most people with "jobs" experience - an experience that could be quite jarring.

The last few days I spent building a carport for our golf cart.   One problem with having a golf cart is where do you park it?   We paid $300 for the golf cart and customized it on our own, spending a total of about $2000 to speed it up and make it more usable.   It was more fun that merely going to some cart shop, borrowing money, and spending ten grand or more on a customized "buggy".   Maybe our home-made cart isn't as nice, but it is something we made which makes it more satisfying.   Plus, it has an air horn.

So anyway, we decided to build a car port for the buggy.   I was up in the attic getting down the Christmas tree (which we put on the front porch, on a timer, sans ornaments) and I saw this sheet of corrugated green fiberglass.  I had noticed it before and didn't think much of it, other than to wonder why the previous owner put it in the attic.   For some reason, I tugged at it and realized there were four sheets, each about 4' by 6' in size.  I took them down and thought about it - maybe here was the key to my buggy carport!

But green corrugated fiberglass looks, well, kind of trailer park.   So I designed a trellis frame, using pressure treated 4x4's covered with a plastic fence post tube and a 2" x 4" frame to support the panels.  To hide the panels, I used a 1" x 8" PVC trim board.   We painted all the lumber (two coats) before building it (there's a hint right there!).   From the road, or indeed even from a few feet away, the fiberglass panels are not visible at all.   It just looks like a trellis or loggia as some folks call it.  Total cost for materials was $512.35, most of which was bought at Lowes, other than the fiberglass panels, which were free. 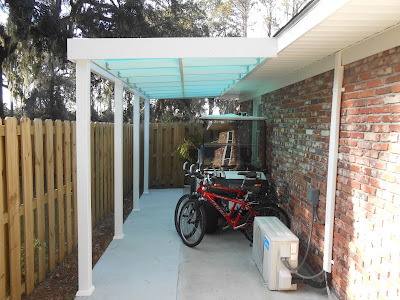 Room for the buggy - and bicycles.  The split-system I installed myself a couple of years back, using a manifold and gauge set and a vacuum pump I bought on eBay for about a hundred bucks.  It works great and keeps the garage temperate all year long.


I have plenty of other projects to do.  The laundry room needs a makeover, and I want to take out all the cast-iron drain pipe in there and replace it with PVC.   The "Pacific Electric" circuit breaker panel is a fire hazard, and I want to replace that.  Mark wants his sink hooked up in the studio.  The garage needs to be painted.  The carpets in the bedrooms are worn, and I would prefer to replace them with hardwood.  I can do this all myself, and I have all the time in the world to do it.

The list goes on and on.   We want to travel to Alaska this summer, and I remodeled our camper in anticipation of the trip.  I even installed a small electronic safe in it!   I really don't want for things to do.   And that is in addition to bicycling, walking, buggying, golfing, and all of the other activities here on a resort island. 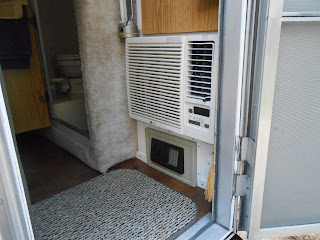 I found this electronic safe, like they have in hotel rooms, for cheap on eBay and installed it under the air conditioner in the Casita.