The Madness of Crowdfunding

Is crowdfunding the wave of the future or just an idiotic way for the masses to throw away money?

Today, more than ever, people are placing their faith in technology, not just for the survival of the human species but also for the expansion of our economy.  I recently was sent a link to a Merrill Edge report about the future of the economy for 2018.  One of the analysts conceded that the second longest bull market in the history of United States is bound to come to an end sometime soon, but they posited that the advances in technology, along with the tax cut might keep our economy expanding yet a little bit longer.

People place too much faith in technology.  The mentality of the average American - as reflected in the media -  is that if you can latch onto "The Next Big Thing" you can make millions if not billions of dollars.  Of course, what we consider "technology" today is oftentimes just mere mercantile endeavors. Amazon really isn't technology, it's just selling crap on the Internet.  Similarly, Facebook is just a website, and not really a "technology" of any sort.  It is just Junior High School gossip, put on a web page.

One of my favorite YouTube channels is a fellow named Techmoan who puts together videos about obsolete audio and video formats of yesteryear.  For me, these are a trip down memory lane and also cautionary tale about putting your faith in technological hardware and software.  What seems like the hot ticket today ends up being obsolete tomorrow.  When I was coming of age it was quadraphonic sound - supposedly the wave of the future.  However, it never took off but died a quiet death.  I wonder how many companies "invested" in that future?

One of his more recent videos was about something called the rokblock.  It is a tiny little wooden box that has wheels on it and you place it on top of vinyl record and it drives around the record and using a stylus to play the audio of the record.  It sounds like an interesting idea until you realize it was developed many, many years ago in a very similar device (now back in production) which was shaped like a tiny Volkswagen Bus, and would drive around on your record and play it, albeit not very well.  And it is said that these devices tended to destroy records as they played them. 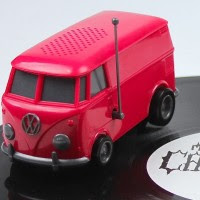 Almost the exact same thing - down to the little "antenna" on the side - was marketed years earlier.  So why does someone need "crowdfunding" to re-invent what has already been invented?  Oh, and it was cuter as a VW bus than as an ugly block of wood.

Anyway, a fellow "came up" with this idea which apparently was already done before and decided to crowdfund it.  He raised a lot of money for it, and developed a copy of the earlier vinyl killer device, albeit with a rechargeable lithium-ion battery and Bluetooth connection. And he managed to produce it and ship product to the early investors and eventually he appeared on "Shark Tank" (which is some kind of reality TeeVee show) and sold the company for half a million dollars.  Good for him.

However, as the fellow from techmoan illustrated, that device (like the original) really doesn't work very well, in fact it kind of destroys your records.  Moreover, who the hell uses records these days other than a few oddballs who still believe that vinyl sounds better than digital or kids trying to be retro?  And even then, serious vinyl enthusiasts are not going to use something with over 5 grams of tracking weight (!!) that basically shreds your records and leaves tire tracks on them.

This got me to thinking about the folly of crowdfunding.  Why were people willing to pony up dough for a product that hasn't been made yet - but had been made in the past and really wasn't novel or an invention per se?  Moreover, why would you pay money for something that really wasn't very useful?  Why would you want to have this little box driving around on your records playing music poorly?

Moreover, if this really is going to be "The Next Big Thing" why wouldn't they want to invest in this and own part of the company and have a share in terms of stock, rather than merely put down money so that you can have the product if they ever decide to make it?

This is like investing for idiots.  It reminds me of the Elio car, which still has not been made and at this point they're talking about 2020 as the earliest manufacturing date - although it looks like that also is a fantasy.  People have bought stock in the company which is still traded today.  However a lot of other people merely put down deposits on these vehicles - deposits that are nonrefundable - and these folks are now out their deposit money.  If you really believed in the future of this vehicle why wouldn't you invest in the company rather than invest in the vehicle itself?

And that right there is the problem with crowdfunding.  The people throwing small amounts of money at these ideas are not going to reap the rewards, if the ideas are successful - but will lose their "investment" if it is not.   Heads they win, tails, you lose.  What's not to like?  In the case of the rokblock, the developer of the product ended up selling the company for half a million dollars which was a nice Payday for him.  The people who crowdfunded him got a sample of the product which was worth what they paid for it, perhaps less.

In fact based on the techmoan video, as well as the follow-up teardown video, I can only assume that most people probably played with the product for a few minutes or an hour or two and maybe showed it to friends and then shoved it back on a closet shelf, where it languishes still today.  In other words, people threw their money away on a useless, pointless toy they could have bought on eBay for a lot less.

Crowdfunding is not investing, it's just throwing your money away.  Maybe I'm missing something here and maybe somebody can explain to me why this is such a great thing.  Why should we, as individual investors or consumers throw money at wild ideas on the internet just because they sound cool?  Lining somebody else's pockets and making somebody else's dreams come true might be altruistic, I guess.   But even then if you really wanted to help people there are probably people more in need than some young tech entrepreneur pitching an idea over the internet.

Please note that I'm not saying you should "invest" in these speculative so-called tech companies - far from it.  As the Elio example illustrates, people who bought stock in that company are looking at massive losses and will probably never recoup their money - much as the people put down deposits on the car.  High-tech companies can strike it rich on occasion - but probably 9 out of 10 of them end up failing.  Silicon Valley is littered with the corpses of dead tech companies that never made it.

And while most of these tech companies do go belly-up, the people who founded them somehow managed to make money in these deals.  As the CEO or chief technical officer or whatever, they take home a paycheck which is funded by the sale of stock or by investment money from investors.  Many of these companies are little more than vehicles for IPOs, which are little more than legitimized fraud on the general public.

And there in a nutshell is why I think perhaps our bull market may be do for a pull-back.  Again, it won't be any one single thing as it was in previous years.  It won't just be over-priced real estate or over-inflated mortgage-backed securities, like last time.  It won't just be a blow up in tech stocks like the time before, or indeed any one sector.  Rather, I think it's going to be a combination of higher interest rates, higher inflation, and a general fatigue on the part of the public of "Next Big Thing" investments, which turn out to go bust.

And one of these things that I think people will be fatigued of, is crowdfunding.
Newer Post Older Post Home