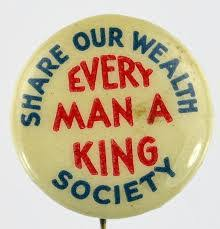 The current debate about wealth distribution is nothing new.   Political button from the era of Huey Long.

People of every generation like to think their problems or their political situation is unique.  "Nothing like this has ever happened before!" cries the college student who was still in 4th grade when President Obama was first elected.  Oh the cries of the Millenials who claim the baby boomers "had it so easy!" when in fact, they faced staggering inflation, high interest rates, high unemployment, a draft, an impeached President, even and odd gas days, a drug epidemic, and street violence far, far worse than today.

Every generation likes to think they got the short end of the stick, and maybe some do moreso than others.  But conditions today, with low inflation, low interest rates, and low unemployment, are ideal compared to years' past.  If you think your student loan debt is bad, imagine what it would be like with double-digit interest rates.   Let's hope it never comes to that.

But as the political button above illustrates, these sentiments have been brewing for a long time - decades, centuries, perhaps since the dawn of time.   A cave man looks over and sees his neighbor has more food to eat, because that neighbor planted more crops or hunted more mastodons.   Or maybe that neighbor had more fertile land to plant, and a better hunting ground - or maybe just better hunting skills.   Regardless, I am sure the first cave man said, "Gee, Og has more than I do, it would be 'fair' if he shared his wealth with me!   I will go to the tribal leader and force him to to do that!"  And thus Socialism was born.

And thus Communism was born.   The problem is, of course, that not only is it impossible for everyone to be in charge, very few of us are qualified to be in charge.   We all have different levels of talents and abilities as well as motivation and energy.   It may not be "fair" to distribute wealth on the basis of who is more skilled - or has more luck in hunting - but it is a system than incentivizes people to excel and to at least try.   And no, it is not a perfect system, and it never will be.   A cave-man who is utterly clueless and have no skills or motivation, will accidentally drop a rock off a cliff, which in turn will hit a mastodon on the head.   He gets credit for the "kill" even though he really stumbled into it.

Yet others get ahead through chicanery and sharp practice - some of the time, at least.   It seems that folks who go this route eventually get their comeuppance, whether they are tarred and feathered by outraged townspeople, or under investigation by the SEC.   The wheel of Karma does come around, which is why you read about these people in the paper, accompanied by a photo of them being frog-walked into a van.  It is better to worry about your own life than to rail about the injustices caused by others.   When you neglect what is on your plate, to complain what is on your neighbor's, you do so at your own peril.

One of the hardest things to accept in life is your own limitations.  We often fail to appreciate how much we accomplish in life and how good a life we have, because we compare ourselves to others.  I mentioned this before in an earlier posting regarding the Ten Commandments.  Most people don't understand what coveting means or why it is a sin.  People misconstrue this term to me lusting after your neighbor's wife when in fact it talks about comparing yourself to others.  At least that's the way I interpret it.   And actually, how could you interpret it otherwise?   If "covering" was lust, then the Bible is admonishing you not to lust after your neighbor's livestock.   And that just doesn't make any sense - and besides, they covered that elsewhere.

The people we read about in the newspapers and online are famous people who do great things.  We read about young billionaires who struck it rich in the technology field, or musical superstars who sell platinum records.  Or we read about handsome movie stars who signed multi-million dollar movie deals.  We were rarely read about schmucks like you and me, unless it is some wacky "human interest" story about someone collecting the largest ball of twine.

I was listening to Performance Today on public radio the other night when Fred Childs played an excerpt from a piano concert put on by a judge from the Federal Circuit, Richard Posner who was described as the ultimate polymath.  Not only a respected Federal Judge but also an author on a number of topics and apparently an accomplished pianist as well.  This got me thinking, what the hell have I done with my life?

I recounted before that one of my classmates at General Motors Institute is now President of that company.  Of course, she didn't drop out of the school, and she was much smarter than I am and worked a lot harder.  She probably didn't waste a decade of her life smoking pot, either.  But it is tempting to think, that someone in the same circumstances that I was in, ended up doing much greater things.  What was the difference between the two of us?  Was it luck?  Talent?  Intelligence? Hard work?  Does it really make a difference why?

The reality of life is that not all of us are cut out to be Kings or Presidents or CEOs or Internet billionaires.  In fact the vast majority of us will lead rather ordinary lives and the best that we can hope for is to have happy and healthy lives and also be financially comfortable.  That's not a bad option, considering half the planet never achieves this goal.

One sure way to derail what is quite an adequate existence is to constantly compare yourself to the top one tenth of 1% of the world population and wonder why your life is coming up so short.  If you do this you will be perpetually unhappy and ultimately depressed.  Moreover it will prevent you from achieving what little you can in life, which actually is quite a lot, once you think about it.

Americans are arguably some of the wealthiest people on the planet.  We drive huge monster trucks that get 8 miles per gallon and live an enormous homes.  We are so well-fed that even the very poorest of Americans suffer from obesity related illnesses.  We do not live in want.

While it is indeed important to improve yourself and move upward in life - as far as you can - it is unrealistic to expect that everyone can become a CEO or billionaire, or President, or whatever.   Our society - indeed any society - functions not because of the people at the top of the pyramid (make creepy triangle sign with hands) but because of all the people in the intermediate levels, including the bottom.

In Robert Heinlein's short story, The Roads Must Roll, he describes a future where "road cities" linked by conveyor-belt-like roads would tie together major metropolitan areas.  He got the general idea right, but the details wrong.  Washington, Baltimore, New York, and Boston, are almost connected into one mega-city on the East coast, connected by ordinary roads that don't roll, but the cars that do.

The point of the story is about a revolt by the "working men" who believe that they should be in charge, and one man in particular who decides to call a strike and try to take over the roads.  The story is interesting because it is not so much about science and technology and futurism, but instead about labor and management and psychology of men.  And it illustrates how a few malcontents can really screw things up when they think "they should be in charge" of things.

The reality is, of course, that for every person "in charge" or on top of the pyramid, there has to be two or three or four below him, and a corresponding number below that.   For every Mr. Burns, there has to be a Smithers, for Batman, a Robin.   You ask yourself, what is in it for them?  To be second-string to be big guy - or even further below the food chain.   Do they find satisfaction in reflected glory?  Or do they realize they are not cut out for the top job?

Now, you can take this one of two ways - as an excuse for failure or an excuse for not even trying, but also as a realization that no matter how hard you try, odds are, you are not going to climb this "hierarchy" (make creepy triangle sign with hands) very far.   But you can climb higher than you are, if you try.   And even a modest success can be worthwhile, if it means you live a happy, interesting, loving, healthy, and comfortable life.

Dream no small dreams, it is said.   But then again, don't be disappointed when your dreams don't quite work out as you thought they would.   Odds, are, where you end up might be a different place, but a pleasant place, nevertheless.
Newer Post Older Post Home