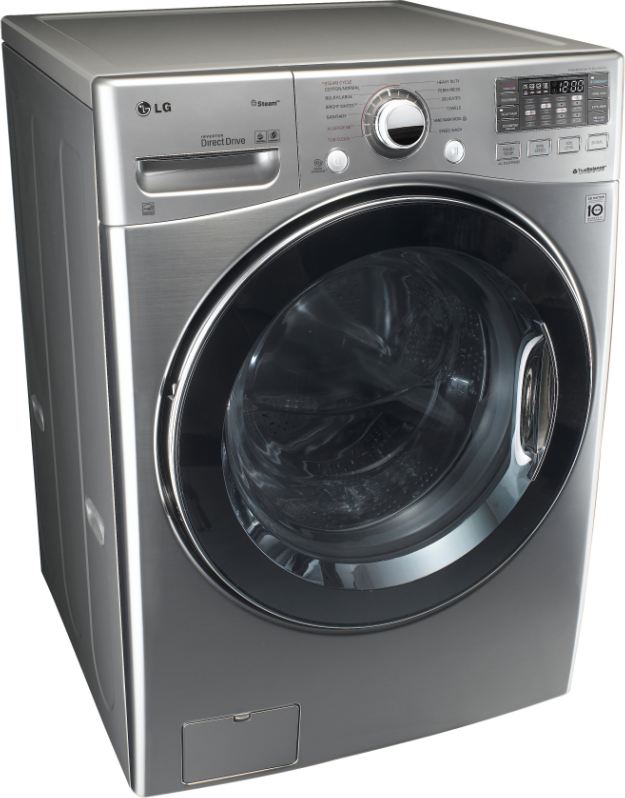 I was ambivalent about buying these fancy washing machines.   Now that they cost 50% more, I may just take a pass.

We are still working on the new laundry room, and I may make a video of the effort.   One thing I have had trepidation about is getting a new washer and dryer.   It seemed that since our existing machines are about 12 years old, and near the end of their design life, it might be a good idea to replace them while we overhauled the plumbing and be done with it - donating the old machines to a charity one of our island Police officers runs.

We thought about replacing them eventually with the same kind of top-loader washer and front-loading dryer - you know the cheap kind that you used to be able to buy from GE for $250.  Today, they are made by Roper, don't have great reviews, and cost $299.  Most other "top-loaders" are over $400 now and some are pushing $500.   Meanwhile the front-loaders are dropping in price to the mid-$500's, making them at least more affordable, if not a pain-in-the-ass with special laundry soap.

But now that Trump has slapped an astounding 50% duty on these washers, they may just be priced out of my reach.   Or maybe I should buy one this afternoon, before they raise the prices.  Which?

"But Bob!  You could buy an American-Made Whirlpool and avoid the tariff!"   That may be true, but likely not.  When Obama slapped a hefty duty on Chinese-made tires, US companies didn't take market share away from them - they merely raised prices themselves, and suddenly overnight, tires were pricey.   And when you need tires, well, you can't just wait for the tariff to go away in a few years.

The problem is, of course, that tariffs don't solve anything, and at this point in time, could be disastrous.  They are not "saving jobs" as American manufacturers will just raise prices to the level of the Korean-made products with tariffs - creating nothing more than a windfall profit for Whirlpool and others.   The Koreans might build a factory here - much as Hyundai/KIA has in Georgia to assemble high-margin SUVs (while low-margin compacts remain imported), but don't expect that to create a lot of jobs - or high-paying jobs.   Likely they would locate in the South where Unions are not popular.  Hey, $15 an hour is a king's ransom in Alabama!

And we're not talking about a lot of jobs here - the entire appliance industry might employ a few thousand at most.   And we are in an era of ultra-low unemployment.   All this trade-war nonsense will do with regard to jobs is drive up the cost of labor, which in turn will lead to more inflation - wipe out the windfall profits Whirlpool might make and wipe out any gains for labor, as their cost of living will be higher.   When your $1000 washer is now $1500, I am not sure a few dollars raise puts you in the driver's seat.

We saw this in the 1970's.   The UAW went out on strike in 1972 and got huge wage concessions.   The cost of labor went up, and the price of cars went up.   The auto workers really didn't come out ahead, as their inflated wages drove up prices, and their cost of living ratcheted up to erase any gains they made.   And then the plants started closing and everyone lost their jobs.   And eventually - decades later - these inflated costs bankrupted GM and Chrysler.   The Union won a Pyrrhic victory only.

Yes, you read that right.  The "Free Trade" Republicans of today were the trade-war Republicans of yesteryear - a trend that dates to the early days of our republic when Northern manufacturing interests wanted protection from foreign imports, so they would not have to compete with the efficient and well-established factories of England.   The British were importing our cotton and exporting finished goods - and Southerners (Democrats all) enjoyed swapping their bales of cotton for British manufactured goods.

Of course today, Southerners are largely Republican and Democrats represent - or used to represent - the Union laborers of the North.   But a funny thing happened in 100 years - more and more factories are opening up in the South, without unions, and the North has become the rustbelt.   Donald Trump promises "jobs" to the few folks left in the North - hanging on and hoping the big-buck union jobs will come back, so they can pay their sky-high property taxes, so the local DPW can buy over-priced snow plow bolts from the local Mafia-linked supplier.

But the jobs ain't a-coming back.   The factories today are more automated than ever.   Watch some youtube videos of auto factories back in the day, and you see dozens of people standing around, many of them apparently with their hands in their pockets.   The paint booth at AMC needed a dozen people to paint a 1972 Gremlin.   Today, one guy with a clipboard pushes a button and the car moves into the sealed paint booth on a robotic platform, and three painting arms apply the precise amount of paint to each area of the car in exactly the same manner each time.  No runs, no drips, no errors!

Republicans changed their mind on the Tariff and got behind Free Trade because industry - which they represent - wanted it that way.   Free trade meant that companies could buy parts cheaply overseas - or outsource entire products overseas - and also sell their products overseas without trade barriers.   In theory, it is a great idea.  In practice, it doesn't work out so well, if you were one of those forklift drivers I knew back in 1979 who was making a whopping $42,000 a year at GM - more than many Doctors made at the time (and more than many lawyers make today!).

Overall, Free Trade has worked out well.   Yes, wages are depressed as a result.  But yes also, those depressed wages buy a whole lot more than they did in the hyper-inflationary era when wages ratcheted up barely a half-step ahead of prices.   Getting a 10% "raise" means nothing when inflation is running 10% per annum.   One problem with Free Trade is that other countries have different labor and environmental standards, which often means we are exporting sweatshop labor and hazardous waste dumping.   By moving "messy" industries to third world countries, we are making our country cleaner, at the expense of the health and welfare of people in developing countries.

Fair Trade might be a better approach - allowing tariff-free "free trade" between countries of similar social, political, and environmental values.     Allowing free trade with a third-world country might only exasperate their existing problems.   Although the opposite might also be true.   Since we have opened the doors to Chinese imports, the economy of China has taken off.   We talk about maybe getting 3-4% growth rate as though it were the holy grail, while China tries to keep its growth down to under 7% if possible, so their economy doesn't overheat.

Eventually, however, these things do reach an equilibrium.   As manufacturing and exporting grow in China, demand for labor rises.  Wages go up.  Domestic demand for products (such as cars) skyrocket.  Demand for labor rises even more.   The cost of manufacturing increases further.   It is already getting to the point where many manufacturers are wondering whether it is worthwhile to manufacture in China, given the low wages and low energy costs available in the US - as well as the cost of shipping things halfway across the globe.   As a result, many companies are relocating manufacturing to the US - in non-Union factories, of course.

All that could change, however, if labor rates ratchet up and inflation takes off.   The "living wage" of $15 sounds fine and all, until it means companies cut back on workers.   And of course, today, it may turn out to be a cruel joke anyway, as the high demand for labor has meant that many companies are paying more than that just to attract unskilled workers!

So this means a "win" for a few selected companies - but Republicans are not in the business of picking winners and donchuforgetit!   And I am sure that Whirlpool executives, when they come to visit Washington DC to lobby for their cause, always stay at the Trump Hotel.   I wonder what else they do to get the President's ear.

Tariffs and Trade wars were one factor recognized as causing the crash of 1929, as world markets and world trade basically shut down.  And that one event was probably the turning point in the GOP's move from "God, Country, and the Tariff" to "God, Country, and Free Trade."

But apparently Trump didn't get the memo.   But as a reader notes (and many others echo) Trump really isn't a Republican, which is one reason why many Republicans in Congress secretly are hoping the Democrats can impeach him, so they have a nice, reliable Republican President Pence.

In the meantime, either I buy a washer tomorrow, or keep using my old ones for another five years....
Newer Post Older Post Home