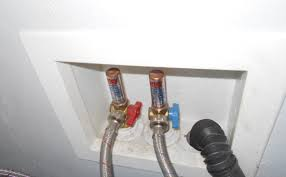 If you have one of these washing machine "drain boxes" in your wall, I would suggest you not use it as a drain for your washer.


I am in the middle of a laundry room makeover - and not by choice, either.   However, the plumbing in our house is nearly 50 years old, which is about its design life.   And over the years, people have modified the house, sometimes properly, sometimes not, with some mixed results.  And by the way, this is typical of any house that is more than a decade or two old.  Having owned nine houses and condos (!) over the years, I have seen this sort of nonsense again and again.   Even new construction has its share of hidden nightmares behind sheetrocked walls.  It is probably better you don't know. 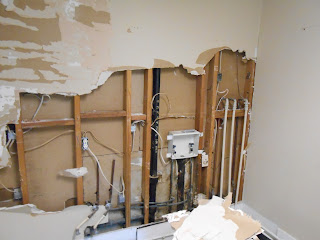 Welcome to the mildew nightmare.  No wonder they call it a "wet wall"!


The laundry room was initially on the inside of the house, from what I can divine from my architecture archaeology.   In 1970 when the house was built, they had a laundry room off the kitchen, wallpapered in a kicky 1970's pattern with large yellow and orange daises on a white background.   It was the style at the time.

Then, sometime in the late 1970's or early 1980's, someone decided to move the laundry room into the garage and make a bar where the laundry room was.  They covered over the wallpaper with cheap press-board paneling in an eye-searing chartreuse/green.  Whoever did the work was none too careful.  The sheetrock was slapped on where the faucets were moved and the "drain box" for the washer was reversed to face the other side of the wall in the garage.   Since the washing machine and dryer were now on the other side of the wall (in the garage now) it wasn't too hard to move the plumbing and electrical.

The house went into the rental market for a couple of decades, and about 15 years ago was purchased and remodeled and sold to us.  The lime-green paneling was painted over in an oatmeal color (which was popular at the time - today they would have used grey, which is trendy) and the icemaker installed. Fast-forward a dozen years and all these "remodeling" efforts are showing the wear and tear of a decade.  The appliances, once all-new, are now more than 2/3 the way through their design life - if not at the end.  I already had to replace the icemaker and the disposal. The washer and dryer and dishwasher will be next.   I hope the A/C unit holds on for as long as possible.

Houses - what's not to like?  They are just a collection of expensive things that wear out and break over time - and the more complicated and expensive you make them, the more expensive it is to maintain them.  All you renters out there, consider that.  Your monthly housing expenses are a very finite number - and predictable.

Anyway, like any 50-year-old house, it has its share of issues.  Houses in the South generally don't have basements (particularly on a barrier island where you are 12 feet above sea level).   Everything is on a slab and the water and sewer lines are poured into the slab when it was built.   This can be a nightmare, as these lines can eventually corrode through and leak thousands of gallons of water - as happened to a friend of mine when he got a $1500 water bill one month.   The solution is to either jackhammer up the floor (no, thank you) or run pipes through the attic, where they probably should have gone in the first place.  So far, that hasn't happened to us, but we are about due for it.

About half the houses on the island have had their pipes replaced, so it is a conundrum as to whether to continue with our existing piping or use this as an excuse to overhaul that as well.   Like any other project, once you start "digging" into it, it can mushroom into a complete teardown and rebuild.

The big problem is the drain.  While most of the drain pipes are new PVC which run underground in a trench dug next to the house during the remodel, the drain pipe in the laundry room is old cast iron pipe, which tends to rust and form rough surfaces which catch lint from the washer and thus clog up.  These washer drain socks help somewhat in capturing the lint before it goes down the drain.  We have been using these for a decade now, and the drain, while slow, does drain.

Of course, it doesn't help if you let a non-woven spun fiber cloth go down the drain!  I was able to snake this out with my RIGID power-snake, but the drain is still slow.  And speaking of slow drains, one mistake we made when we first moved in was to use the stupid drain in the wall box like the one shown at the top of the page.   Washing machines, when they drain, dump an enormous amount of water at once - more than most drains can handle, much less a partially-clogged slow drain.   So the water overflowed and since the box was not properly sealed, water went down inside the wall, creating a mildew nightmare.

Even if the "drain box" was properly sealed, it would have backed up and overflowed down the wall.  A far better choice, I think, is to have the washing machine drain into a laundry tub, where it can act as a buffer for the drain and prevent messy overflows.   And that's what we've been doing for the last decade or so.

But after the latest clogging incident, I felt I should finally break down and clean up the plumbing, eliminate the drain box, and get rid of the mildew and mold forming on the wall.  I had previously removed the sheetrock behind the washer and dryer to let the area air out - and sprayed it with chlorine bleach to kill the mold.

So, I have been tearing out the old sheetrock, and also removing layers of old lime-green paneling and daisy wallpaper.   I am going to run a new drain, I think, using PVC pipe, although this may mean jack-hammering up the sidewalk behind the house.   I am tired of living with slow drains that clog like clockwork.   The water lines, I will leave for now - we'll wait to see if they leak before replacing them.   I am going to hire the roto-rooter man to scope the line, now that it is all exposed, and also determine where it goes - under the slab or out back. 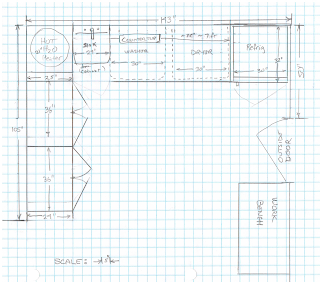 I drew a little plan on re-arranging the laundry room

And we are going to use this opportunity to do a "makeover" for the laundry room.  When the washer and dryer were moved to the garage, they moved the hot water heater from the corner to the middle of the wall - running CPVC pipe along the baseboard.  It is a real "pipe sampler" out there, with cast iron, PVC, CPVC, copper, galvanized steel and so on.  And all the shutoff valves are 50 years old and if you try to use them, they leak.  So we need to replace them.

And that's not even addressing the electrical issues.   The outlets were haphazardly wired (emphasis on "hazard" here) and one wire was just wrapped with electrical tape on one end and stuffed in the wall (!!).   The dryer outlet was blackened from arc-ing with the plug.  I have already replaced both.   We got our work cut out for us here.

My thinking is to move the washer, dryer, and beverage fridge along the back wall, move the hot water heater back to the corner, and install some wall cabinets for storage.  Since the washer and dryer are 12 years old, I am thinking of replacing them.   But what with?

I like the old top-loader washers - they were cheap ($250 or so) and reliable and easy to repair - and rarely needed repair.  But a funny thing has happened in the washing machine business.   The top-loaders are getting harder to come by, and the ones that remain are getting really pricey - like $450 or more.   And in the meantime, the front-loaders are coming down in price, to about $550 - which is a lot better than $1000 or so.   We had the front-loader type in New York, where we were on a well, and they do use less water.

But most require you use a special "High Efficiency" detergent, which means I can no longer use my favorite cheap Mexican detergent from Walmart.  If you don't use the special detergent (and in the amount specified) your clothes may have a soapy "mildew" smell, as the washer may have it as well - something that people have complained about long and loudly about front-loaders.   On the plus side, with front-loaders, you can put a countertop over the machines and have a space for folding laundry.   Or you can buy those stupid "drawers" that go underneath the machine - that cost as much as an old top loader once did!   And I am talking just a steel drawer, not one of these fancy "mini-washers" that goes underneath your washer (why did we need this?).

Oh, well, people are idiots and soon separated from their money. Speaking of idiots and high efficiency detergent, the latest "fad" the kids are into - beside bitcoin, and it makes about as much sense - is to put detergent pods in their mouths.  It is idiotic, of course, but it does deftly illustrate that people, in the aggregate, are blithering idiots and will do anything for attention or because their peers are doing it.  This does no mean you should do it too.  Act rationally in an irrational world - and that means not eating soap.   Well, detergent, anyway - excuse me!

I may end up just putting the old appliances back and running them until they die - that would be the most cost-effective solution.  We could then make a decision on top- versus front-loaders, when the time comes - if ever.   Probably by then, the decision will be made for us - the only machines available will be front-loaders in red (?!?) or stainless steel.   The world is changing, I guess.  No country for old men with their top-loading washers.

So anyway, I have a lot of work to do.   In addition to the plumbing and sheetrock work and the new drain, I have to paint the floor.  Do I use that fancy epoxy paint with the little flecks in it, or just buy some grey basement paint which I have done in the past (it is cheap, easy to apply, and you can "freshen" it up with a new gallon rolled around in a matter of minutes, every few years)?  Or do I put in some sort of flooring material, like I did in the camper?  And the ceiling - the folks who "remodeled" sprayed the ceiling in the garage and either didn't prep it well or used an incompatible paint.  The net result is that the paint is coming off in sheets, all over the garage, and I have to figure out how to scape or sand the rest off, and paint over it, or just put another layer of sheetrock over it and start over.  Nothing is easy.

And lighting.  We want to get rid of the buzzing and flickering fluorescent lights and replace them with LED lighting which is not only more efficient, but brighter.

And to think, some reader thought I would have "nothing to do" in retirement!

UPDATE:  Here is a video of the (almost) completed project: