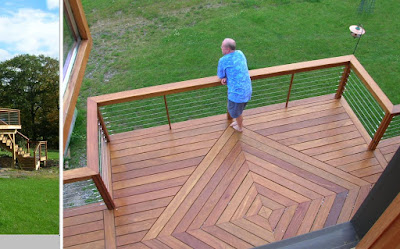 Technology changes rapidly these days - in subtle ways we are often not aware of.

Oh, sure, we had florescent lamps, and later on, compact florescents.  We had neon, and of course, halogens.   But LEDs are supplanting most of these technologies, because they use about 1/10th the electricity, and generate little heat.  We replaced the light bulbs in our camper with LEDs, not to save energy, but because the standard incandescent bulbs (which were basically automotive backup light bulbs) generated so much heat, they made the camper hot.  We did the same thing in our kitchen at home - the halogen track lighting was like sitting under a sun lamp!

And the nice thing is, you can add as many LEDs as you want, and not worry about over-amping the circuit - the current of ten of these things is about the same as one incandescent.

Unfortunately, for us older folks, the light bulb aisle is now a confusing array of choices - everything from incandescents, to halogens, to CFLs, to LEDs, with the LEDs gradually crowding out the others, a little more each year.   And I am sure that younger people are more familiar with this tech, and can talk knowledgeably about how many Kelvins of Chromacity a bulb has or what the Color Rendering Index is.   LEDs provide a lot more choices, to be sure - a lot of confusing choices for people used to buying 100-watt GE bulbs in the past.

A simple thing, the light bulb.   Terribly complicated, today.  And as I noted before, the 'bulb' may go by the wayside next, as LEDs are built-in to lamps.  Why bother making a bulb replaceable when the LED has a life expectancy of 20 years or more?  When the LED dies, you simply throw away the lamp.   Little things like that are what catch people by surprise, when technology changes.

Light bulbs seem pretty high tech, compared to something as simple as the nail - or the screw.   We use a screwgun in construction, as we generally suck at it, and often have to take things apart once or twice before we get it right.   Screws make this easy to do - and are a lot less noisy than hammering.  They hold better, too, I think.   Mark asked me who invented the screw, and I immediately replied, "Archimedes" - the guy who set forth the simple machines that make up everyday life.   Screws and nails are old technology - perhaps as old as civilization itself.

So imagine my surprise when I went to the "fastener" aisle at Lowe's to look for galvanized decking screws and found they didn't exist anymore.   What was there was a bizarre array of screws that I simply didn't recognize.  And each was tied to a particular type of material you should be screwing to.  It seems that old-fashioned pressure treated lumber (an invention created in my lifetime) is obsolete, as it was made with arsenic.  Today, we have yellow lumber that is used in decking, and green lumber used in the ground.  And galvanized screws react with these kinds of lumbers and corrode and fail.   You can't even buy them anymore.   So we have yellow screws and green screws, coated with some kind of paint, and even stainless steel screws, which are keen and all, but stainless can be brittle.

And the heads?  Well, I grew up with the Phillip's head screw, which I thought was "old tech" but was something invented in my parent's lifetime.  All the screws today are torx bits, which obsolete all those old screwdrivers in your toolbox.  Now granted, the torx bits are better - they drive right in without the bit spinning like with Phillip's head screws.  And generally, each box of screws comes with one or more bits to fit in your screw gun - because let's face it, no one uses manual screwdrivers anymore - not when Lithium-Ion battery powered screwguns can do the work for you!

So even screws are different now, and if you are not up on the lingo and the tech, you can screw things up (pardon the pun) by putting the wrong type of screw into your lumber, only to have it fail in a few years.  This happened to a friend of mine who wrapped some pressure treated beams with aluminum trim - something you could do with the old kind of pressure treated lumber.  No more.  The new lumber reacts with metals, so you have to wrap it in tar paper or plastic first (the "house wrap" that they use today - also a recent invention) to prevent a chemical reaction.  Or you use plastic trim - which is becoming more and more popular.  They actually make trim lumber out of PVC now - and it is pretty cool.  I've used it - and yes, it has its own special screws they sell to use with it!

Technology changes, but few of us are up on all this stuff, and can end up stepping the dogshit because of these changes.  Even something as simple as light bulbs and screws can be a nightmare!  I bought some LED bulbs once, and didn't check the "Kelvins" on them - they were as blue as florescents!  So I have a lot of spare LED bulbs to use in closets, the attic, and garage (as soon as I burn through my backlog of incandescents I removed from most of our lamps!).

A reader writes asking if he should re-skin his deck with "vinyl" instead of wood.   He has older style pressure-treated wood, and it is starting to look like hell.  Should he pressure-wash it and paint it?  Or tear off the old wood and re-skin it?  Again, the technology keeps changing, and most of us are not up on this stuff.

To begin with, pressure-washing is something you should probably avoid with a deck - or any wood for that matter.   A pressure washer tends to erode the softer part of the wood between the grains, which in turn leaves the grainy hard part raised - making the resultant surface look clean but it will be rougher and more splintery.   They do sell chemical solutions you can use to clean a deck and give it that greenish-yellow hue it had when new.  But I think painting a deck is a far simpler solution, provided you don't slop paint all over the side of your house or below.   A few gallons and a weekend can make it look like new, and it is easy to touch up from year to year.   In terms of stingy solution, this is it. And it is a do it yourself solution, without the need to hire someone or buy a machine. 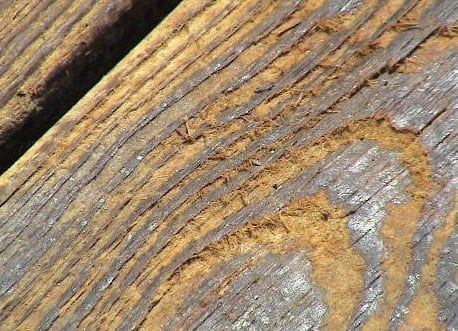 Pressure washing can sometimes damage wood - actually, most of the time.

As for "vinyl" I am not sure what he means.  I had a client who came up with a knock-off of the TREX kind of decking and he educated me about this type of material.  It actually is made of plastic and shredded wood, with an anti-fungal agent added in - to keep it all from getting funky.  The problem with this kind of decking is that it will sag, so usually you have to put the stringers closer together to support it.  If you took the decking off an existing wood deck and replaced it with TREX or any of the copycat deckings (I guess their patent has expired by now) it may look saggy over time.   Also, TREX and the like look really cool at first, but over time do get dirty and mildew-y and saggy.  And it is expensive as all get out!

The deck shown at the top of the page is made of Cumaru - a "rainforest friendly wood" - and that photo was of the deck of our house in New York.  It look fabulous - for about a year.  The wood does turn grey over time, and we tried to use an oil on it to preserve the redwood look and it just made a real mess.  It required the use of stainless steel screws, which were screwed up from the bottom (no screws showing).  I believe they use stainless on TREX, too, but again, this tech keeps changing, so research this before taking my word on it.

We spend thousands to have that deck built - maybe over $10,000.   It was nice, but there was an existing deck there that was kind of flimsy, made of pressure treated, that we had torn off to have this one made.  In retrospect, I could have shored up the existing deck by adding two additional support beams and then cross-bracing it, and then painted the whole thing a sage green or some other fun color.   It would have cost a few hundred dollars and looked as good, lasted as long, and added the same amount of resale value ($0) to the house.   Of course, we wouldn't have had that cool stainless-steel wire railing - right?

So, lesson learned, it is entirely possible to over-improve a house, and decks are no exception.  By the way, when it comes to decks, less is more.  People think they want a huge deck (or dick, for that matter - maybe one is a substitute for the other) but you end up using only a small corner of any deck that you build.   You build a large deck, and most of it is wasted space.

And by the way, building decks is not a job for amateurs - you can kill yourself it is not attached to the house properly and supported from underneath.  Every year, people are killed when decks collapse - decks that were screwed to the side of a house.

Decks are a relatively recent innovation.  Oh, sure, they have been around a long time, and porches have been around a long time before that.   But in terms of popularity, it is a relatively recent trend. My parent's "dream home" on the lake, built in 1960, had a deck running along the front of it, facing the water.  That was pretty avant-garde back then.  It was made of ordinary wood - not pressure treated.   The posts were set on concrete piers above-ground, and the rest was treated with a wood preservative.   When my parents sold the house in 1985, there was no sign of any rot whatsoever.

The whole point of "pressure treated" was that you could put wood right into the ground, which sounds cool and all, but really is just laziness in construction technique.  And today's pressure treated?  Again a friend of mine put that "yellow wood"on the ground and was shocked to find a few years later, it had rotted out.  Seems the new pressure treated is not rated for ground contact, unless you use the green kind.   They change the technology, and you have to keep up.

I am not sure what the point of all of this is, other than as technology keeps racing ahead, we are seeing shorter and shorter cycles of tech.   What I am writing today will be obsolete tomorrow.  This can make it hard to plan, and hard to learn about things, as you are always having to throw away old knowledge and acquire new.

I still have a secret stash of galvanized decking screws - but I am not sure what I could possibly use them for!