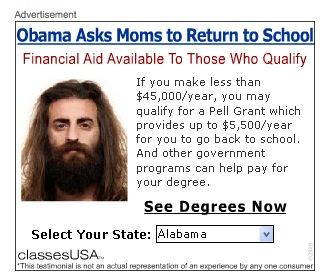 I quit Facebook a long time ago.  In fact, I was only on it for about a year or so, before I got bored with it.   It seemed that it was just another Skinner box - some levers to pull that would engage loud bells and bright lights - something that might amuse a baby for a few moments, at best.  It seemed to appeal to our basest instincts - narcissism among them.  And they neatly wrapped this up in a package of "social networking" - keeping in touch with friends and families and multinational corporations - so that if you didn't do Facebook, there was something wrong with you.

One thing I found disturbing, though, was the ads.  And maybe that is what triggered my fight-or-flight response with Facebook.  You can tell a lot about a person by the company they keep.  And scumbags telegraph right up front what sort of people they are.   As I noted time and time again in this blog, when you get into a business relationship with anyone, predicated on a lie - no matter how trivial that lie is - the relationship will go downhill from there.   And I suspect this is true of personal relationships as well.

But Facebook is a business relationship - or at least a commercial one.   You sell them your personal information - very personal information - in exchange for a free photo and text-hosting platform.  Sounds like a  pretty shitty deal from the get-go, doesn't it?  But that pretty much sums up most of the Internet today.   But wait, it gets worse.  In exchange, you have to put up with intrusive ads for some of the shittiest deals on the planet.

And that is what drove me away from Facebook.  As I noted early on, why were they flinging all sorts of shit ads at me?  Ads for payday loans, weight-loss reduction shakes, or "Obama wants Moms to go back to school!" kind of thing.  These were ads for scams and cons, and when I saw them, I thought, "Facebook not only doesn't have my back, they want to stab me in it!"   So I left.

At the time, I thought that perhaps maybe Facebook was so new, they were having trouble attracting real advertisers - you know, Fortune 500 companies that actually make and sell real products.   But it seems that was not the case, as a recent Bloomberg article points out.   Facebook makes a lot of money from scamming and conning their users - or at least being a complicit accomplice to scam artists and con artists.   At the "Stack the Money" conference, Facebook employees exhorted attendees to buy yet more ad space on Facebook.

Scams are highly profitable, which is why people do them.   If you can find someone to pay you $100 a month for useless weight-loss products, you can make a fortune.  And Facebook's algorithms help you find the sort of people who are susceptible to cons - whether it is weight loss, investments, cryptocurrency, or whatever.   The algorithm figures out who clicks and then blasts the same ad to people who have similar profile characteristics.

So instead of protecting the weakest members of our society, Fecesbook relentlessly exploits them and then serves them up on a platter (with a garnish!) to our friends in Eastern-Bloc countries to harvest like wheat.

What's more, the article points out, Facebook has few employees who are tasked with weeding out this sort of nonsense.  And for the money involved, you can see why - they make money on their customers being ripped-off.  So why stop the money train?   Facebook has struggled from the get-go to make money - and to make enough money to justify its stock price.   Zuckerberg makes coin when the stock price goes up.   So more profits means a higher stock price and more money for him.  How he makes those profits, is apparently no concern to him.

Worse yet, Facebook's own algorithm helps the scammers avoid detection by the few Facebook employees tasked with rooting out deceptive ads.   Using a technique called "cloaking", these advertising middle-men can target ads to certain internet addresses.   There are legitimate uses for this technique - to present ads in the native language of the user, for example.   But since they can do this, they can target IP addresses of Facebook itself, and present innocuous ads to Facebook moderators and monitors.  Facebook could literally have no idea what ads are being displayed.

Or maybe that is just their cover story - or "plausible deniability" as they say in politics.  After all, at the "Stack the Money" conference, cheerful Facebook employees showed up to sell more ad space and take attendees out for cocktails.   It isn't like Facebook doesn't really know what is going on.

Of course, what is really pissing a lot of people off, is how Facebook is complicit in Russia's attempts to influence the election.   Now, don't get me wrong here, I am still not convinced Russia hacked voting machines and changed the outcome of the election.   However, you'd have to be a Facebook idiot to not realize that Russia tries to change public opinion in America (we do, or did, the same thing, worldwide, as well).   We are just pissed that Russia has gotten so good at it, particularly with regard to using the Internet and Social Media.

Republicans have been gutting public education for decades now (and the teacher's unions have been complicit in this as well - dumbing-down our educational system by sucking all the money out of it).  The plan was, make most Americans so stupid that they would really think abolishing the Estate tax and lowering the marginal rates for the very rich would somehow benefit ordinary Americans.   And it worked, too - too well!   Because not only are this huge army of really stupid people gullible and receptive to such nonsensical messages*, they are receptive to messages from foreign powers as well.

And if you want to find stupid people, look no further than Facebook.

* You think I am kidding about this, but the "game plan" for the GOP in 2020 is to run against Hillary. They know they can't win against the current crop of candidates, so they dredge up one they can win against - even if she isn't running.   The same is true of Trump's Tweets.  No, the post office isn't losing money on Amazon - but that doesn't matter.  The main thing is, Trump supporters believe it -which is all that really counts.
Newer Post Older Post Home