How Externalization and Victim Politics Will Cost the Democrats 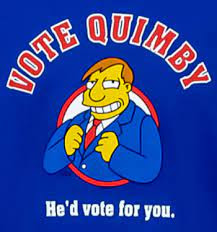 Is it a good idea to wait for a politician to solve your personal problems?  You'll be in for a long wait!


On National People's Radio this morning, one of our comrade announcers was interviewing someone (no doubt hawking some book or something) and he said something that made me puke up my morning tea:

"People in places like Flint, Michigan and Gary, Indiana have been forgotten. The politicians have forgotten about these people and simply don't care about them!"

It is not an exact quote (I cannot find the article on the NPR website, or Sputnik, or on Russia Today).  But it was the gist of it.

And it startled me that in today's world, people still believe it is the job of the Federal Government to "rescue" impoverished places, instead of just encouraging people to move to less impoverished places.   When the soil gave out (early on) in the Appalachian mountains, the smarter settlers picked  up their stakes and moved Westward.  They didn't sit around and mope and wonder when the government was going to come bail out their depleted farms - as if farming rocks was some sort of inalienable right.   The best thing for them - and the country - would be to not farm places where the soil is thin.

Similarly, propping up rust-belt towns with decaying factories and decaying populations - and often with corrupt local governments - isn't a good idea for the residents or the country.   And often it is local politicians who want these "bailouts" so they don't have to confront hard truths about their city, town, or county, and also confront the rampant corruption that was what drove industry away from such locales in the first place.

The choice of Flint, Michigan for the author's whiny quote was an obvious one.   Flint has been the whipping-boy for the left since Michael Moore made the move Roger and Me back in 1989.   Yes, 1989 - which illustrates how entrenched these problems with rustbelt towns are, and how hard they are to solve.

And before you send flames, I lived in Flint Michigan in the 1970's, so please, don't bullshit me about that town.   It was a shithole back then.  I know the dirt about it - and the best thing Flint could buy these days is a really large bulldozer.   Sometimes just starting over is the best option.   Places like Flint are never going to turn into some sort of Shangri-La, no matter how much government money you throw at them.  Flint's "water crises" was a self-inflicted wound, yet somehow the Federal Government is the bad guy here, for not handing out free water in perpetuity.

But Gary, Indiana?  Odd choice - because in nearby Elkhart, Indiana, jobs are a-plenty in the booming RV business.   You don't have to move far to find a job in that "rustbelt" area.   But you do have to move - or face a seriously long commute.   Alas, the poor being poor, choose the latter - driving two hours each way for an eight-hour job.   But that's why they're poor.

Moving on to better feeding grounds is just an obvious choice.   Why stick around in an area where there are limited opportunities?  Worse yet, why stick around in such an area and wait for a politician to fix things?  Because it ain't gonna happen - probably not in your lifetime.   Move on and move up.  Our ancestors did it (how do you think they ended up here?  Even the Indians migrated from Asia!).  Our parents did it.  I did it.

But that doesn't fit the liberal democratic world-view.  In their view, we are all victims, and the government should step in and "fix" things.   But as they say in the 12-step programs, you have to hit rock bottom before you can recover.  And places like Flint, Michigan need to hit rock-bottom and then build themselves back up.  Once land becomes cheap enough and people become willing to work (as opposed to being on forms of welfare) the area will pick up.  Companies will move there because the cost of land and facilities are cheap, and because there is a ready-and-willing workforce of people who can work for cheap because the cost of living is low.

And that right there is why places like Alabama, Mississippi, Texas, Georgia, and the Carolinas are attracting new modern factories, and why places like New York, Michigan, Connecticut, and other "rust belt" States are seeing an exodus.   High taxes and an attitude of "let's milk the local factory for all it's worth" have driven away businesses.   Since people pay so much to live there (property taxes alone are murder, but State income and sales taxes are not far behind!) they cannot work for cheap.  And of course, corruption in local politics means that no only will you not get a tax break for moving your factory there, you will likely have to pay bribes - either to the local politicians or to the local mafia/union for "labor peace".

But the problem is, since so many people believe government intervention is the answer, they vote for higher taxes and higher welfare benefits.   As a result, you end up with places like Oswego, New York, where property taxes are skyrocketing because so many people are on welfare.   Pretty soon, people stop working and go on the dole, simply because it is easier.

But it is a funny thing, even the people who ostensibly "benefit" from social welfare programs know deep down that these programs are a dead-end.   They are given a pittance but never given the chance to get ahead.  They don't want handouts, they want honest government, lower taxes, and the chance to earn a living from their labor.

And that is what Trump tapped into, in places like Pennsylvania, Indiana, and Wisconsin.   The Left may paint the red-hatted Trumpeters as closet (or not-so-closet) racists and xenophobes - and indeed, many are.   But it was Trump's message about getting the rust-belt working again that resonated with those voters.

And in spite of Trump's best efforts to wreck the economy, folks are going back to work in many of these rust-belt towns - reinforcing the message that Trump's ideas are "working".  The boom in RV sales (to be followed shortly by a bust - it is a cyclical business) is keeping the lights on, day and night, in Elkhart and other locales.  To Trump supporters working there, the President's policies are clearly working (in their minds) and are a stark contrast to the crash and slow growth that occurred during Obama's tenure.

Again, appearances trump reality.  No pun intended. You are right - Obama didn't cause the recession, it happened before his election.  But tell that to a guy in a red MAGA hat.   He simply will choose not to believe it.   "Alternative facts" are all the rage right now.  Again, pun not intended.

So here we are, months away from mid-term elections. A sea change has occurred in American electoral politics - the idea of big government giving out handouts simply isn't resonating with voters.  And what are the Democrats selling?  More of the same-old, same-old, which is well past it's "sell by" date -  Look to the government for answers, wait in line for your handout.

One reason I was forced into early retirement was because of these policies.  Obamacare has subsidized my health insurance to the tune of $16,000  $20,000  $24,000 per year - far more than the few hundred a month I was paying on my pre-Obamacare policy.  And each year, the cost of these plans has skyrocketed to the point where I simply could not afford them, if I had to pay for them out of my own pocket.

If I went back to work, and made more than $69,000 or thereabouts, I would have to cough up twenty-four grand to pay for Obamacare.  I did the math on this and realized that not only was it cheaper to just retire early (and avoid the risk and liability of working - oh, and also all that work) but that I really didn't have a choice.  It was go on the dole, or pay through the nose.  Unless I could work full-time at some big mega-firm and make $250,000 a year, it made no sense to work.

I'm no idiot.  When the government starts handing out free money, I will get in line like everyone else, with a wheelbarrow.   But I realize too, that such a system is not sustainable in the long-run, nor is it an optimal outcome for the individual or the State.

And that is the same conundrum, on a smaller scale, that affects the poor in many rust-belt States - or even in the Sun Belt.   When companies were forced to raise the minimum wage, many employees asked for reductions in hours, so they would not lose their food stamp allotment (based on annual income, just like Obamacare subsidies) and other government handouts.   If you are working part-time as a single parent, you might have a plethora of subsidies, from ADC, to SNAP, to Section-8 or other subsidized housing, to daycare subsidies, and the like.   Start making more money and you lose that.

It is simple math, but anyone can do it.  And it never ceases to amaze me how supposedly "uneducated" people figure this stuff out.   Word gets around on how to game the system, or at least optimize your outcomes.   And of course, the folks running these agencies are all-too-happy to let you know how you can collect - it's their job to hand out money.

But is also seems that many of the people who are nominal beneficiaries of these systems are realizing that handouts and bailouts are not necessarily the answer.   Confronting hard truths is a better choice.   Self-actualization beats victim behavior.   Externalizing never solves your personal problems.

Someone please tell that to the Democrats, before they lose even more elections!
Newer Post Older Post Home