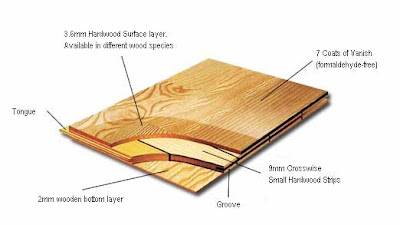 Made popular by home shows such as "This Old House" engineered hardwood floors seem to have had their day in the sun, being supplanted by vinyl and tile substitutes.


We decided to rip up the cheap carpet in the bedrooms and put down engineered hardwood flooring to match the rest of the house.   We bought enough paint to paint the whole inside of the house - walls, ceilings, and trim.   Home Depot had one of those "rebate" deals - we'll see how that works out.

We decided to go with more engineered hardwood for the bedrooms, as it is fairly cheap to buy and easy to install (just glue it down on concrete) and it would match - pretty much - what we already have.  We found out, however, that the 5/16" x 3.5" strips we have are no longer in vogue and that the manufacturer is either out of business or has stopped making the product.  We found a very similar color wood in  5" wide strips, 3/8" thick, which should not be a problem as they are in different rooms with a transitioning threshold.

We bought 700 square feet of it, a whole pallet load, and brought it home in a borrowed cargo trailer.  It is all stacked up in the garage, ready to install.  It shouldn't be too hard to do.  The first piece will be the worst.

But what was most fascinating was that it seems engineered hardwood is, at least in our area, no longer so popular.  Most of our friends have gone to a "plank tile" which is styled to look like wood, but is waterproof and far more durable - and fairly cheap.  Others are using vinyl flooring not unsimilar to that I used in the Casita.   It sounds cheap, but it looks pretty convincing.

You can buy "hardwood" flooring for under a buck a square foot.   But it is little more than masonite with a photo of wood on it.  And you can spend all the way to $5 a square foot, if not more.  If you want it installed, as much as $10 a square foot.  Yes, wall-to-wall carpeting remains the cheapest floor covering out there, at least installed.

What was also interesting was the colors.  It seems darker colors are now in vogue - much as the dark color wood we used in our house in New York.  The light blond or natural oak, or even "red oak" seems to have fallen from favor and is harder to find.  Perhaps it shows dirt more?  Or maybe like the primer-grey wall paint color that has succeeded the oatmeal of the early 2000's, it is a fashion thing.

Mea Culpa, the wall paint Mark chose is called "sea salt" and is a greenish-blueish GRAY color.  So we are right up there with the fashionistas with their houses painted the color of an old junker car.   I guess you can't win.

But with new paint throughout, and new flooring in the bedrooms (as well as a new HVAC system, tomorrow) the house will be "refreshed" and ready for another 15 years of living.  Well, that is, once the kitchen appliances are replaced and the roof redone and the driveway re-paved.

It never ends.   I am looking forward to living in the trailer.
Newer Post Older Post Home