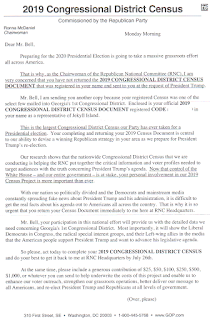 With letters like this, it is no wonder most Americans don't identify with either political party.


I got another fake piece of mail today, from the people who decry "Fake News!" - the Republican Party.  To be fair, the Democrats have sent me similar faked-up documents, but they call them "Official Congressional District Survey!" instead.  The envelopes say, "Do Not Destroy!  Official Document!" and have odd markings and numbers like the mail the IRS sends.

Inside this one, a "Census" from the GOP with a pitch for money - or asking me for $15 for the "processing fee" for my "Census" data.  Pretty deceptive stuff - a mild deception perhaps, but a deception nevertheless.   And any relationship you enter into, predicted on a lie, no matter how trivial, will go downhill from there.

The GOP has tipped their hand here, exposing themselves as lying bastards (big surprise to most of you, I know).  The Democrats have done likewise with their mailers.    And they wonder why we don't give a shit about them and their parties?   They pander to the "base" - the extremists who turn out to vote in primaries.  The rest of us, I guess, don't count, particularly if we stay home.  People get the government they deserve.

What irks me about these documents is that they have all the charm of an infomercial and all the honesty of a timeshare presentation.   And that is what they are selling us here - lies and deception.  "Vote for me, and I'll change everything!" they claim.  The reality is, "Vote for me, and I'll make sure the money looted from the treasury goes to my backers, and not my opponents' backers!"

Which is why big corporations donate money to both sides of most campaigns, as they want to have "connections" with whoever ends up winning.   They don't give a shit about abortion or trans rights or migration or whatever, they just want to sell cars or weapons systems or food.

I guess what really irks me is that these fake census letters (from both parties, by the way, not just one, Snopes!) illustrate what these politcos think of me.   They think I'm a blithering idiot or a doddering old fool.   They assume I'll send in money with this because, you know, the Census is mandatory and  you have to pay the processing fee!  Or maybe, living on retirement island, they assume I am halfway into dementia (fooled them! Only 1/4 way!) and will fill out any form that comes in the mail.

It just makes me want to throw up, quite frankly.  This is how low politics have become in this country.   Politicians lie, yea.  I get that.  But this?   Somehow, this crosses a line.
Newer Post Older Post Home