There's A Bomb In Your Basement! 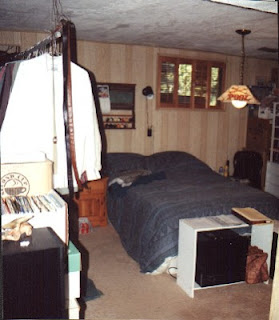 Having an adult child living in your home is like having a bomb waiting to go off.

Grandma finally threw the kid out, but only after he convinced her to co-sign a loan on a brand-new Mercedes-Benz.   And no, I am not kidding about this.  "But Grandma, I need a reliable car to get to work!" he cried, even though he didn't have a job.  The pitch he made was that in order to get a job he would need a car, so, you know, cart-before-the-horse, quite literally.

Why a Mercedes? His step-Dad was into restoring older Mercedes (which can be a fairly inexpensive hobby, as I can personally attest, particularly those old W123 diesels) so step-son thinks that buying  a brand-new Mercedes is sort of the same thing.  Yea, that is fucked-up thinking, but we are talking about a 35-year-old living with his Grandma.

He never made a payment on the car, and neither did Grandma, and the re-po man came, put the stinger on it, and towed it away.  Now Grandma's credit rating is in the trash, but at least she is free of the parasite living in her basement.   She got off easy.  Oh, she still owes for the car though - the balance between the loan and what the car sold for at auction.

Every week, it seems (or even more often) you read about another mass-shooting in the United States.  And it seems there is a pattern in about half of these cases - young men (and it is usually men) living in their parents' basement, who have no job, no education, no girlfriend, no prospects, and no ambition, but manage to save up enough money for a small arsenal of weapons.   Why parents allow this to happen - and they are allowing it to happen - is beyond me.

Now, don't get me wrong, there is nothing wrong with living with your parents if you are attending college, saving up for a down payment on your first home, or whatever.   If this living arrangement is something that is planned and has specific financial goals, great.  But what we see happening in these other cases are just spoiled kids, working intermittently at McJobs (if they are working at all) and using what little money they have to buy drugs, beer, video games, and other luxury items, including guns or samurai swords.

Even if theses "kids" are working, it is problematic.   I know more than one 20- or 30-something who made the conscious decision that living at home was a "better deal" because the money they saved in rent could be used to buy a wall-screen tee-vee, a new computer, a gaming console, and pay for lease payments (and staggering insurance rates) on a bitchin' new Camaro - as well as buy pot, attend concerts, go clothes shopping and do everything except be a responsible adult.

What staggers me about these situations is that these parents (and grandparents) are ordinarily smart people - adults - making adult decisions and making them horribly.   It isn't hard to figure out what will happen when you let a 30-something young man live in your basement for years on end, unemployed, doing drugs and playing on the computer all day long.   Eventually you have to toss them out, and at that point it gets ugly.  In some cases, "junior" decides not to move out, and slays Grandma with his new samurai sword - or his AR-15.

Yet parents (and grandparents) do this all the time.  And they are often college-educated people - which illustrates the fallacy that a college education makes you smart.

I didn't like my Dad - he was a real asshole.  The kind of guy who euthanizes your cat when you go away to college.  Yea, that.  But probably the biggest favor he did for me was being an utterly unlikeable asshole.   When I dropped out of college, he told me I had to move out of the house within a week.  I told him the feeling was mutual and left in three days, finding a job and an apartment on my own.   It was a gift - the gift of freedom.  He kicked me out of the nest (and I jumped as well) and learned how to fly.   The worst thing he could have done was to coddle me - let me live at home and get high all day long and look for a job "tommorrow, whatever!" and be dependent on him and his handouts, as some of my siblings did well into their 40's or even 50's.  Ouch.

So Dad, this Father's day, here's to you - for being an asshole!  It was your best attribute, in retrospect.   Hell is full of Dads, as George Carlin once said.   But maybe this is a survival skill for the young.

But speaking of horribly bad decisions that college-educated people make, what about timeshares?  There was an article in the Detroit Free Press published by way of USA Today about a couple who were professionals at General Motors and yet signed up for three timeshares and now were paying even more money to try to get out of them (including signing up for a forth time share as part of the process.

The fellow profiled wanted to be rid of the timeshares so they would not be a "burden to his children" as he mistakenly thought that when he died, the kids would be forced to inherit them and pay the maintenance fees forever and ever amen.   But that is not true - you can disclaim an inheritance.  In fact, it takes an assertive action on your part to claim it.

Think about it for a moment - and the law of perpetuities - if timeshares were forced upon the next generation, you could be bankrupted by obligations your parents signed up for!  It would be like inheriting your parents' debts - which is not the case, by the way.   You are not obligated to pay debts incurred by your parents, unless you co-signed a loan for them (foolish!) or inherit a house encumbered by a mortgage (and even then, you can just walk away from the inherited house and disclaim the inheritance).

But hey, this guy who was a salaried GM employee, couldn't figure this out.  And since he was dumb enough to buy three timeshares, the "timeshare relief" people were happy to take a second bite at the apple.   You would think that people would learn that a "free seminar" or free meal or free vacation comes with a catch - the catch being they want you to sign up for something.  Just walk away from free, because free isn't.

Oddly enough, one of these companies was actually able to relieve him of two of his timeshares, which I think is nothing short of miraculous.  But it is a warning to the rest of us - think hard about a "vacation" obligation that requires you to spend thousands of dollars to get out of.   Why anyone in this day and age still buys timeshares is beyond me.  The same is true of MLM schemes - has anyone not gotten the memo on this stuff?

But of course, the funny thing is, the folks who defend these bad decisions are the ones who made them.   I wrote before how when Mark wanted a Fitbit and the associated Aria scale, I found the latter didn't work half the time, in that it would not log data properly.  I went on a Fitbit discussion group to ask what was wrong and was banned from the group for not posing a kicky comment about how fun and neat Fitbits are!   (As I predicted, a year later, the Fitbits are in a drawer somewhere, with dead batteries).

That was a bad move on Fitbit's part.  A better approach would have been to have some shill try to troll me and make me out to be some sort of disgruntled crackpot (not hard to do) and thus downplay my point that none of this shit actually works as advertised.   By shutting me down, they were inadvertently admitting I had a point.

And that is why the timeshare and MLM people rarely attack their critics (and why Scientology has largely given up on its heavy-handed approach to critics).   When you slam your critics, you give them credence.  You raise awareness.  The Streisand-effect kicks in.  People who didn't know about the "controversy" are now aware of it.  "Wait, Timeshares are a ripoff?   I never knew until they sued the timeshare critic!"

Instead, they rely on the army of "useful idiots" who bought timeshares and have yet to admit they made a long-term financial mistake, to defend their industry for them.   Same is true with MLMs - even the people who lost thousands of dollars to them will defend them to their last breath.  And hey, nothing better than a customer testimonial, right?

But timeshares are a bad bargain, in every sense of the word.   If you really want to go to the Marriot Grande Ocean resort in Hilton Head, (yes, I have been there, a friend's parents had a timeshare there.  It is, nice, I guess) you can simply rent one of the timeshares from some hapless boob who was suckered into owning one.  Why obligate yourself to a lifetime of payments for a vacation that you might only enjoy once or twice?  But that's logical thinking - something missing at most timeshare seminars.

But these two examples illustrate what this blog is all about.  I never set out to write about how to get out of poverty, but how to avoid getting into it.  It seemed to me that much of the middle-class was sinking lower and lower into poverty these days - myself included - not because someone "took away" our money, but because we willingly gave it away through shoddy deals and dumb decisions.

I know countless middle-class people who claim they cannot save for retirement, yet they pay their adult children's cell phone bills, or car insurance, or whatever.  People claim to be living paycheck-to-paycheck and complain how awful they have it, while driving around in a $50,000 brand-new leased SUV.   It makes no sense to me.  You can't be poor and still own a fancy car, a house, and a big tee-vee, as well as the latest iPhone.   Folks feel entitled to all of this - and it illustrates the difference between poverty in America and poverty in the rest of the world.   Poverty in America means not having the things you want, rather than not having the things you need.

And yes, I realize I have strayed far off my original topic here.  But have I?  Because the common denominator is this:  Smart people - college educated middle-class people - making dumb decisions with their money.  People including myself!  People who have jobs where they would be fired for making such boneheaded decisions, and yet in their personal lives, they fall victim to the poor decision-making, whether it is letting adult children parasite off them for years, or signing up for odious financial obligations.

These are choices we make.  These are not things thrust upon us by fate, the government, or the evil 1%'ers.
Newer Post Older Post Home