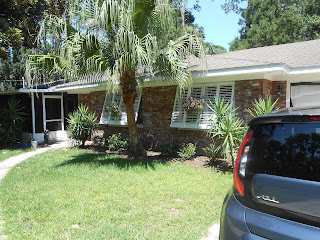 Free is a price I really like - when it's really free.


We were driving by the club hotel in the golf cart and went by the dumpster.  There, leaning against the fence were a collection of shutters from a recent renovation.  We asked around and the boss-man said "Yea, you can take them!" So we did.

Mark has wanted plantation or Bahama shutters on the front of the house for some time.  We even called a guy in Jacksonville and he told us it would cost close to $5000 to have them made in aluminum (!!) and we took a pass.  But now, we have more than enough to do the project, and they were the exact right size, without cutting.  I removed the hinges, put them at the top, and then used some Bahama shutter hardware we bought in Key West a decade ago, to secure them at the bottom.   We may take them down and run them through the table saw to remove the hinge indents - and give them a coat of paint. 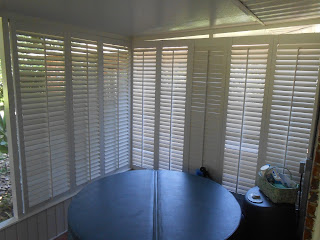 There were taller shutters and we did run those through the table saw and painted them with two coats of exterior trim paint.  They now make a privacy curtain around the hot tub in the front screen room.   We previously had a plastic roll-up blind there, but it was several years old and starting to look ratty, particularly after the last hurricane.

We also installed them in the new guest room.   We had the guest room in the front of the house and thought guests would enjoy the sliding glass door into the screen porch.  They didn't.  People are weird about privacy and women in particular are convinced the neighborhood peeping Tom just can't wait to get a glance at their vagina.   So they close the curtains tight, convinced that someone is looking in on them.  But nobody is, other than deer, raccoons, and the occasional possum.  City folks, go figure. 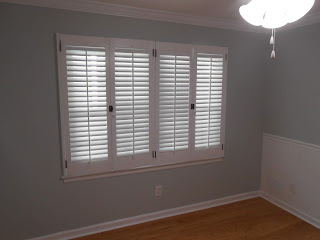 They let light in, but also can provide privacy.   Bitch to paint, though.

So we figured why not make the office in the front, where there is light and the breezes come in from the screen room, and the guests and sit in the dark in the back room next to the air conditioner.   And with these shutters, they can block out all the light -  as well as lookies from the vagina peeper.

We have a few more shutters left over - and the remodeling at the club is not nearly over.   But I am not sure we need to do more - we don't want to turn into the "shutter house".  Besides, painting shutters is a royal pain-in-the-ass, which is why I let Mark do it.  It seems there are eight sides to a shutter, and they are nearly impossible to paint with a brush.  Wooden shutters will sit there all day and soak up paint from an paintgun, and still look like raw wood.

So I will call my policeman friend and donate them to him.  He sells things like that and donates the money to veterans charities.
Newer Post Older Post Home