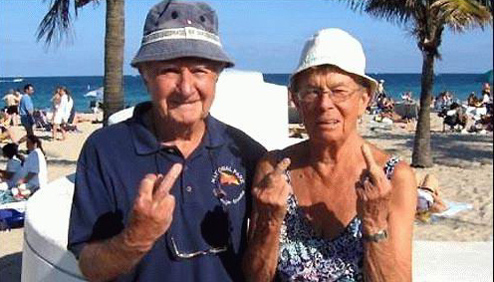 When I was a kid, getting a "government job" was seen as a low-paying but safe job with good benefits.  Today, government work can be more lucrative than the private sector.  What happened?


A reader writes that where he lives in Florida, a lot of his fellow retirees are former government employees.  As a retired business owner, he has no debt and has to Shepherd his resources carefully so he doesn't run out of money in retirement.  His fellow retirees, who are former teachers, cops, firemen, and civil administrators, are all earning pensions equal to 75% of their last years' pay, which for a married couple that both worked, could be well over $100,000 a year, perhaps more.  And they were all in debt, making payments for houses, cars, and everything else in their lives.

And I wrote about this before - two friends of mine who live not far from my reader, who have Federal government pensions totaling over $100,000 a year.  They have a nice house, a nice motorhome, two nice cars (that they trade-in frequently) and live a pretty decent lifestyle.  He confessed to me, however, that his "life's savings" was only $30,000 and everything they owned was financed.  It is a different way of living, in retirement, than for most.

But what happened?  When did having a government job going from being the consolation prize, to being prized?  I think a number of things have combined to make government employment one of the most desirable jobs today - which spells trouble for our country in the long run:

1.  The 401(k) and IRA:  Laws enacting these self-funded retirement plans were enacted just as I reached the legal age to enter the workforce - around 1978.   Our generation is still a few years away from the official retirement age, but we are already seeing a lot of baby-boomers retire on these plans.  Pensions went away in the private sector, and the few that remain were very under-funded (see below).   Our generation has to save - and most haven't.  The few that have, have to marshal their finances and carefully monitor their spending - it isn't as carefree a life as the government pensioner.

2.   Bain Capital:   Venture Capitalists - or Vulture Capitalists, depending on whether you own a garbage disposal or not - bought up failing companies in the 1970's until today, and then sold off the profitable parts and pocketed the cash.  They then left the aging decrepit bits to fail, often guaranteed to fail by old machinery and infrastructure, an aging workforce, and unfunded pension liabilities.  The Mitt Romney's of the world took home big paychecks.   The guy who worked 40 years in the finger-cutting factory got 40 cents on the dollar (if he was lucky).

2.  The Incredible Shrinking Middle Class:  Time was, you could go to work for the auto factory and bring home a decent salary - not enough to get rich on, but enough to get by.  When you retired, you moved to Florida and lived in a modest retirement house and played golf and maybe fished.  We used to own condos in Pompano Beach, which was in the 1950's and 1960's the kind of place a blue-collar worker could afford to retire to.  Looking at the photos from that era, you see the houses are modest, and a 21-foot boat was considered "big".   Today, those houses are torn down for mini-mansions and the boats start at 21 feet.   We are a wealthier nation than back then, but the idea that the working Joe can afford to retire comfortably is starting to evaporate.

3.  Striking and Sickouts:  While an auto plant worker could go out on strike for higher wages, competition, in the form of foreign automakers (with their non-union plants, right here in America) meant that eventually something had to give.  High wages were also a greater incentive to automate, and today, it takes less than half as many people to assemble a car than in the 1960's.   In some cases, far less than half.   In the old days, dozens of people would man the "paint shop" and spray cars as they came down the line.  Today, one guy pushes a button and a robot does the rest - we can't afford to have someone inhale all those paint fumes all day long.

But for the government employee, there is no competition.   Ronald Reagan famously fired all of the air traffic controllers when they went out on strike, which put the fear of God into government unions.  But local unions, such as for police, firefighters, and teachers, have less fear.   They can threaten to strike, or "sick out" if striking is illegal, and bring local governments to their knees.  In some jurisdictions, they packed city councils with union members or those sympathetic to the employees unions (read: paid by them, though political contributions) and raises were handed out like candy.

In some famous cases, this has bankrupted cities and counties, and made salaries obscene.  The highest paid Police Chief in California wasn't in LA or San Francisco, but in an obscure small town which is now teetering on bankruptcy as a result.  Oh, and that Police Chief is now retired and drawing nearly a quarter-million-dollars in pension a year, and the California pension system is more stressed than ever.   Sadly, outrage among voters is strangely muted - we still believe the myth that our public servants are underpaid, and are distracted by irrelevant issues like trans rights and abortion.

But bear in mind that even using the more aggressive 5% rule for withdrawal, in order to fund a retirement income of $50,000 a year, I would have to save up a million dollars.   Read that again until it sinks in.    So a retired schoolteacher couple from New York State, drawing $75,000 each a year in pension (and driving my property taxes up to the point I had to leave) has the equivalent wealth of over three million dollars.

And yet, if you asked them, they would say they are not wealthy, but merely middle-class.  And they could decry those "evil 1%'ers" who have a million dollars or more.    The sad thing is, of course, that given all the money they have (in terms of salaries over the years and pensions) they could have ended up really, really rich, to the tune of millions in the bank, but most, like my friends, have only a few thousand.

Their lifestyle doesn't seem much more extravagant than mine, because a huge portion of their income is squandered on interest payments and restaurant meals and designer coffees and brand-new clothes.   My life may look similar, but I am buying used cars and paying cash, paying little or nothing in interest, and not going out to restaurants and coffee bars on a daily basis.   Oh, and the bulk of my wardrobe comes from the thrift store.    We can put on the appearance of their lifestyle by scrimping and saving.   If they did as I did, they'd be millionaires many times over in addition to their fat pensions.

But such is the trap of the salaryman.  If you are told you will have a guaranteed income of $X for the rest of your life, you'll figure out a way to spend that amount every year.   And you might not blanch at borrowing money so much, because it becomes a way of life for you.  So you squander a huge portion of your income in interest payments and think, "this is the way everyone does it!"

Of course, for people with pensions from municipalities and not from the State or Federal government, it may not be all worry-free.  There is already a background hum that some pension obligations might not be fulfilled.   So far, most pensioners have dodged a bullet - even Detroit found a way to keep most of the pensions intact.    For Federal employees, their future seems assured.  But future retirees, of course, will be under the new retirement system, which is more akin to a 401(k).

But what does this all mean?   Well, it is interesting to watch how this all plays out - interesting and scary at the same time.   The whole point of the 401(k) and IRA was to change the mindset of Americans from "employees" to "investors" and for middle-class people who bothered to save, it pretty much worked out.  For the poor who could not afford to save much, it was (and will be) a sick joke.  For the middle-class who chose not to save but to buy a new car instead, it will be the culmination of a lifetime of poor choices.

You can see where Congress was going with this, though.  As my friends' example illustrates, when you receive a pension or a steady paycheck, you tend to think of purchases in terms of monthly payments, and not in terms of overall wealth.   And maybe for a vast majority of Americans who are largely ignorant of finances (as I was, and still largely am) and not only that, not capable of learning, perhaps the cradle-to-grave pension plan and government safety net is the only answer.   It is hard to say.   You give a man a pittance every week, he can buy food to survive.  You drop a pile of money in his lap, and it is all spent in a week or two.

What is also scary to me is that a country where working for the government is the best job you can get, is not a country that is very stable or productive.   If you read Waiting for Snow in Havana, you might understand what I mean.  In the pre-Castro era, getting a good government job was the key to success - that or being a wealthy landowner or business owner.  Everyone else had to make do.  Those who found favor with the government largely did well, and often this followed along ethnic and racial lines.   In the post-Castro era, of course, everyone works for the government, so to speak, and everyone now has the same level of poverty.   When more and more people become government employees, and government employment is seen as the most desireable endeavor, then socialism becomes the norm by default.

However, I think this is an anomaly, not a long-term trend.  "Retirement" as we know it, is a modern construct that has only been in place for about a half-century or so, since the end of World War II.  Before then, retirement was something you did for 18-24 months before you died, if in fact, you didn't die on the job.    If you did retire, you likely were supported by family members and lived in the same house.  The whole model of retirement communities for "active seniors" is something that really didn't get started until the 1960's.

So it is hard to say this is a trend or a data point when our experience is so limited and we have no real hard data on trends for more than a few dozen years.   I suspect that since the new hires with the Federal government are going to this new 401(k)-like plan, we will see a paradigm shift in their thinking.  And this will trickle down to municipal governments as they struggle with their unfunded pension liabilities in the coming years.   It may take a municipal bankruptcy or two (Hello, Chicago?) and the serious threat of a pension meltdown for the government unions to buckle and give into self-funded plans (at least in part).   And as events in Wisconsin have illustrated, the power of government unions to shape government policies is limited by the power of the taxpayers having to foot the bill.

We will look back at this era as a "golden age" of retirement for government employees.   I don't think it is a trend that will go on perpetually.
Newer Post Older Post Home