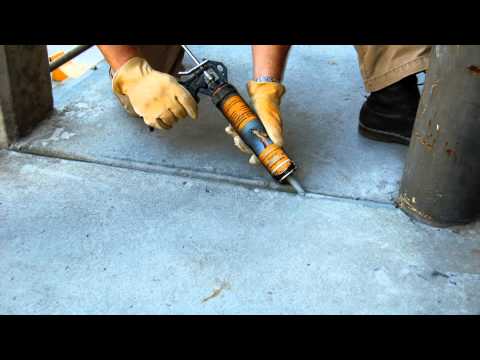 It is not the big-ticket items that make home ownership expensive, but the little things.


I recently did some more home maintenance projects - the list is never-ending, and you can do as much or as little as you want.  If you do too little, you usually end up paying for it later on.  On the other hand, you can go "over the top" and spend a lot of money and achieve nothing.  Like anything else, moderation is the key.

I recently bought some self-leveling caulk or self-leveling sealant, as it is sometimes called.  This is like runny caulk that is ideal for sealing cracks in concrete and whatnot.   Where the patio joins the house there is naturally a small gap.  Unfortunately, dust and dirt falls into this, and eventually seeds, and plants start to grow.    At first, it is just an unsightly nuisance, as you have to cut these down with a weed trimmer or by hand, or use an herbicide spray.   Gaps like this also allow water to ingress, which can lead to the concrete settling over time.   So you put some of this self-leveling caulk in there and it looks nicer and keeps plants from growing and water out.  The alternative - doing nothing whatsoever, would be that eventually a tree would grow out of there, crack the sidewalk, and you'd have to replace the whole thing.   This rarely happens, of course, other than at abandoned properties.

Seems like a simple thing, until you realize that a few tubes of this caulk can run $30 to $50 or more, at $10.99 a tube.  When did caulk become so expensive?  It is the kind of thing you buy at the big-box home improvement store without looking too closely at the price.  I ended up going online and finding it for $7 at Walmart, and a quart of liquid pour even cheaper on Amazon.   It doesn't sound like much, but $50 here and $50 there adds up.

It never ceases to amaze me how expensive a simple trip to Lowes or Home Depot can be.  You want to put in an outlet, for example, so you buy an electrical box, a GFCI outlet and outlet cover, and maybe some wire.  You get home and look at the receipt - $50!  What the heck happened?   The markup on electrical supplies is staggering, as is plumbing.   You want to replace a faucet in your home?  Expect to pay hundreds for some of them - no wonder they are the favorite of shoplifters.

Often it is these little things that add up.  You want to put in a new hot water heater.  No big deal, right?   You can buy a heater for $499 for your house.   But expect to pay another $100 in associated parts and plumbing supplies to install it - all those little things add up over time.

This is why I am so skeptical when people put up these click-bait articles about how they made a "tiny house" or "skoolie" camper out of an old school bus, utility truck, U-haul van, or Greyhound bus, for only $5000.  Just the trips to the home improvement store for the wiring, plumbing, and fasteners would cost a thousand bucks - before you even get into air conditioners, refrigerators, toilets and holding tanks.  Unless their "conversion" consists of throwing an old Wal-mart sleeping bag on top of an Ikea futon - and using a 5-gallon pail as a toilet - I doubt they spent that little.

It is human nature, of course, to only calculate things in our favor.  We count the big-ticket items and neglect the smaller ones.  During our fairly recent garage and laundry room makeover, we spent over $10,000.   Taking aside $4000 in appliances and $900 in IKEA cabinets, where did the rest of the money go?   Sure, there was sheetrock, a new sink, faucet, FRP for the walls - but that's maybe another $1000 or so.   The rest was all little things - glues and caulks and screws and fasteners and trim pieces and small plumbing parts and valves and PVC cement and teflon tape and paint and paint brushes, and rollers and roller trays and.... well, you get the idea.  I'm not even factoring in the pair of blue jeans that were basically destroyed, along with a couple of t-shirts, a mountain of rags, soap, detergents, and other cleaning supplies.  We tend to overlook that - not to mention the automobile expenses of driving to the big-box store at least twenty times and back (and to IKEA in Jacksonville, the appliance store - and well, you get it).

By the way, that figure doesn't include the split system heat pump I installed a couple of years earlier ($2500) or the garage door insulation, as well as a number of other smaller projects, such as storage cabinets, shelving, and whatnot.  As you can see, this has been an ongoing project!

It is, in a way, like figuring out how much a cruise really costs.  Take the "come-on" promotional price and add a zero to it - our $199 cruise cost close to $2000 when all was said and done, the $699 cruise, close to $7000.   I mean, you could spend less, by staying in your room the whole time and doing nothing like these quarantined corona virus people, but that's more of a jail sentence than a cruise.

We all like to lie to ourselves that things cost less than they do.  I know more than one die-hard cruiser who told me they went on a cruise that was "only $299!" and when I replied, "Well, that was per person, right?  Plus port fees, fuel surcharge fees, taxes, drinks package, meals package, internet service package, shore excursions, prepaid gratuities, and such, right?" they get mad at me.  "It only cost $299!" they almost scream.  No one likes to have their world-view challenged.

So, how to avoid this home trap?   Well, it is a trap that can happen with a boat, RV, or car as well.  One approach is to worry less about making your home "perfect" - so-called "house polishing" as I call it.  Another is to own less house and thus have less to maintain.  And the same is true of boats, cars, or RVs - trying to make them "perfect" or "upgrading" is often a waste of time.

But I guess the bottom line is this:  Don't lie to yourself about the actual cost of things.  Calculate in those "little expenses" as a big chunk of any such project.

Another lesson learned:  Figure out in advance all these "little things" you'll need and shop around online.   It won't make these things "free" of course, but the big-box stores are betting that you will pay a lot extra (or not even look at prices too closely) when you need that fastener or other small part to finish a project, and will value convenience over price.
Newer Post Older Post Home