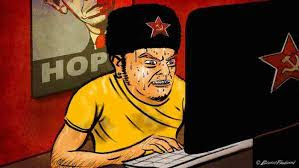 Russian influence is very nuanced and sometimes not very obvious.

A reader sends me a link to a video entitled "One Nation Under Debt".  It is an interesting video, but something didn't seem right about it.  The narrator had what sounded like an Australian accent, but it sounded to me a little Russian around the edges - like a Russian faking an Australian accent, because it was easier to do than an American one.

My guilty pleasure in life is watching Russian crash videos on YouTube.  So I am familiar with Russian accents and Russian click-bait videos.  Hell, I even made one myself!  Can't blame them for making such content - they certainly need the money!

The videos are mostly stock images with voiceover.  And the video about America starts out with a stock video of Times Square, which the author posits is the center of the American financial system.  Maybe the center of Disney-based Broadway musicals (and 40 years ago, the center of the sex trade in New York) but not the center of finance.  Maybe Wall Street?

Intrigued, I clicked on the "About" link on the channel and got nothing. Just some generic text that they were doing videos about economics.  Who?  No names, no faces. Very odd. Even the "History Guy" has an "about me" page and has his face front and center on most of his videos.

I looked at some of the other videos and my reader did the same.  Videos about the economies of socialist countries tended to be positive.  Videos about capitalist countries - including the US - tended to be negative.  The video about Russia starts out with a short segment lauding the Russian military as being "the most powerful in the world" by dint of their having a few more nukes than we do (ours, of course, work, which is more than can be said for Russian technology).  Russia's military is maybe #4 behind China, India, the US, and North Korea.  We, of course, spend more than the next eight largest countries, combined.  Russian and China have maybe one working aircraft carrier - we have over a dozen.  And we don't buy ours used from Russia, either - as China does.

The video goes on to mention "controversies" and "international conspiracy theories" targeting Russia, implying these are unfounded and unjust.  After a little more drum-beating for the Russian military, the video admits that Russia's economy is hardly larger than Canada's (and like Canada's, based largely on exporting raw materials).

Wait - they don't claim "Russian economy best economy!"?  Of course not.  And right there is one reason why people have a hard time spotting Russian influence - or indeed any influence - online.  To say something stupid like "Russia is the greatest country in the world" would be giving away the game too easily.  People would scoff at that and move on to the next video.  Besides it accomplishes nothing.  The goal of the Russian Internet Research Agency isn't to promote Russia but to cause chaos in other parts of the world.  They want to get useful idiots to run down their own country for them and to think of their own governments as corrupt.  It is the old Sun Tzu playbook - if you can collapse a society from within, you need not meet them on the battlefield.

Because, let's face it, on the battlefield, Russia would get creamed, by us, by China, even by India or North Korea.  It really is a fifth-rate country.  But first-rate in terms of the Internet.

Their goal is to stir up discontent.  Take the other fellow's strengths and turn them into weaknesses.  Trump is master at this - as are Republicans in general.  If your opponent is a war hero and you are a draft dodger, turn the whole thing on its head and get people to question the credentials of the war hero.  Poor John Kerry, poor John McCain - both "Swift-boated" to the point where many people think of them as cowards and not heroes.  It is only a matter of time before they come after Buttigieg and allege he surrendered to the Taliban.  Oh, wait, they already did.

Perhaps the fellow putting up these videos is just some Australian or Kiwi with an odd accent.  But why the secrecy as to who he is?  That is the infuriating thing about this sort of stuff - it is hard to spot, and if you call it out, people (usually useful idiots) will claim you are seeing a "Russian behind every tree" and being paranoid.  Yet we know the Russians are doing this - we have all the reports from all the "three letter agencies" as well as the press.  But I think most Americans don't understand how this works.

No, they are not "hacking" into voting machines and changing votes.  They are commenting on Reddit - not to support a particular candidate, but to create flame wars, troll wars, and a general sense of unease and discontent.  They are the ones putting Trump on the front page of Reddit, every single day, before the 2016 election.  This year, Trump is amazingly absent, and Sanders is on the front page.  Did all the Trump supporters simply evaporate?  Of course not.  Trump is going to get the nomination, that is certain - why waste energy on that?  Maybe the Trump trolls will reappear after the nominating convention - we'll see.

Putin likes Trump for a number of reasons.  The divisiveness he engenders is the main one.  Sure, maybe he was hoping for a friendlier Russian policy and a lifting of sanctions.  But frankly, Russia is working within the sanctions and I doubt it is a major issue for them.  What they want is chaos, disruption, and every American hating every other American.  Mission accomplished, for sure.

So yes, behind every "blind Trump hate" posting you see online is a Russian troll, or a "useful idiot" they have infected with the virus.  Again, it is a subtle thing - as subtle as voting up a comment or making some reinforcing comment when someone says something dumb about Trump - or any other politician or candidate.  They want us to hate each other - plain and simple.

Again, Americans don't get this.  They assume that when someone is trying to influence you, they go at it in a direct way, like a salesman trying to sell you a car.  Well, what they think of as a salesman selling you a car.  A good salesman, however, doesn't get into your face and give you the hard-sell - that rarely works.  Instead, he tries to steer you to make the decision to buy on your own.  So you mention your car breaking down a few months ago, and he commiserates with you about it and mentions an expensive repair he had to make on his own car.  "Glad I got rid of that old jalopy!" he says, "It was driving me to the poorhouse!"  And later on in the conversation, he will bring up the issue again - nonchalantly.

They also will try to sell you on the idea of status - how cool you will look in your new car, how the neighbors will be jealous, and how women will find you sexually attractive.  Again, they don't just come out and say this - that gives away the game.  You have to make these suggestions almost subliminally.  It's all about psychology.  And the better you are at this game, the better a salesman you are.

This is why car dealers hate the Internet - how can you influence people through a website?  And that is why every car company website and car dealer website is populated with pop-up "Chat" windows asking you for contact information so they can call you and influence you.

A good salesman is a good influencer - and every day we read another story in the press about how someone was influenced out of their life savings over the phone or even through e-mail or instant chat - criminals playing upon the weaknesses of the elderly, lonely and scared.

People know about this, and they tsk-tsk old Grandma who was screwed (not literally) out of what little savings she had by some Internet Lothario.  That could never happen to me!  But it does, and chances are, it already has.  After 9/11, most people in the United States jumped on this "Let's invade Iraq" bandwagon, including myself (most people won't admit to this today, of course - must have been those 300 million other people!).  We were manipulated, badly, by the government and the press, and continue to be manipulated today.

So let's just get over that and stop pretending we are skeptical supermen  - we are all vulnerable to this sort of thing.

And let's stop pretending it doesn't exist - that there is no such thing as the Russian Internet Research Agency and "Fancy Bear" and while we're at it, Internet agencies in China, North Korea, or indeed, even the United States of America.  There is a war going on - right now - for the hearts and minds of a planet.  A war that most people are unaware is even happening.

NOTE:  I've said before, and I will say it again - never read the comments section on YouTube.  For some reason the top comment deals with "food waste" - those horrible Americans are throwing away rotting food!  Of course, it is dangerous and illegal to sell spoiled food, and there really is no "food shortage" in America, or indeed, the Western world (Thank you, capitalism!).  The largest health problem among the "poor" in America (considered "the rich" everywhere else) is obesity, not malnutrition.

Chiming in were over a dozen comments about "food waste" - this is another canard which I think has its sources in the Russian Internet Research Agency.  They want people to be upset that food is "wasted" when in fact, throwing away bad food is part and parcel of food preparation.  Mark has a degree in Hotel & Restaurant management, and every time some idiot blathers on about "food waste" he gets a good laugh.  You throw away bad food.  You throw away food that is uneaten on someone's plate.  That is the standard of food hygiene.  You want to get sick or something?

There is no horrendous "waste" of food going on, and why this narrative is getting traction is anyone's guess - or maybe another example of how our Russian friends have taken something good about our society (its ability to provide an abundance of food) and turn it into a negative (so much waste!).

NOTE 2:  This fellow has enough subscribers and viewers to make quite a bit of money from Youtube and people still feel the need to send him money on Patreon!  The world is full of crazy people.
Newer Post Older Post Home