(The Time I Almost Was On) Who Wants to be a Millionaire? 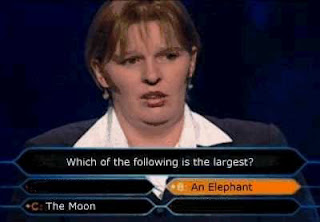 In order to get on the television show, "Who Wants to be a Millionaire?" you have to have a set of skills that are completely different than what is needed to win the prize.


It must have been about 20 years now, when I tried to get on the television show, "Who Wants to Be a Millionaire?"  Back then (1999), we still watched television, and it was an interesting show from a number of perspectives.  First, they gave away a shitload of money - a million bucks.  Since the game show scandals of the 1950's, television game shows gave away only small amounts of money.  If you went on "What's My Line?" in the 1960's the most you could win was $50.   On other shows, maybe a few hundred or a thousand.  The $64,000 question was long gone.

That started to change in the 1970's.  The "Big Money, Start-Studded Match Game!" allowed you to win up to $10,000 per game, although initially the maximum was $5000, and they had a contestant limit of $20,000.   Shows like "Let's Make a Deal!" and "The Price is Right" gave away cars and things that could total as much as twenty grand, but the real big money was still elusive.

Enter "Millionaire."  The show was pretty simple.  Regis Philbin was the initial presenter.  You were asked a series of multiple choice questions, which increased with difficulty at each level.   You had an unlimited time to answer - there was no ticking clock to mind.   And you could use three "lifelines" - phone-a-friend, ask-the-audience, or 50/50 - the last eliminating two wrong answers from the four presented. At certain levels, you had to risk what you had won - something also not seen on other game shows, except perhaps "Let's Make a Deal!" - if you wanted to go on.   Do you keep the half-million, or risk it for a million bucks and a question you might not be able to answer?  It added to the tension.

Anyway, I thought at the time that many of the questions were pretty easy - why not get on the show and win?  And at the end of the show they had a phone number to call if you wanted to become a contestant.  I called in, and as I recall, I had to answer some questions using the pushbuttons on my phone (in the days of landline) to qualify.   If I qualified for the first round, then they would call me and I would have to answer a number of questions - all correctly - to be accepted as a contestant on the program.

So they called at the predetermined time, and I guess there were ten questions, maybe twenty.  I blew it on the last question, which asked me to put in order, from lowest to highest, four things, using the touch-tone keypad on my phone.   I messed up and put them in order from highest to lowest and was eliminated as a potential contestant.   You had only seconds to answer each question, so it was kind of nerve-wracking.

Even if you made it that far, that only got you into the audience, where ten members would have to answer a "fast finger" question to be selected as a contestant to win the million bucks.  Again, you are being testing on how quickly you can answer a question, not on your knowledge per se.   A lucky guesser could end up winning simply by pressing a button randomly and be correct and first.

It struck me as odd that in order to get onto a game show where the questions were based on your knowledge and you had unlimited time to answer and you could use "lifelines", they used a screening test that filtered out people based on how quickly they could answer questions that were often mathematical puzzles.

The filtering criteria had nothing to do with the actual game.  It would be like going for a job interview, where the odds of being hired as a coder depended on how well you answered questions about American history.  It made no sense at all.   But then again, maybe that was the plan - they didn't want to give away a million bucks too often.  So the kind of people who could solve math puzzles in 20 seconds or less were a different type than those who knew obscure trivia and history questions.   In other words, it ensured that the contestants would fail, unless they were polymaths.

It struck me that the way we pick politicians is about the same.   We have these elections and primaries and "debates" which highlight skill sets that are utterly worthless to an elected official.   Your ability to launch "zingers" against your opponents in a debate or speech probably works against you once you are in Congress - and have to cooperate with those same opponents. Whether you have memorized the names of world leaders might be less important than your policy decisions affecting them.

I read the papers - well sometimes just the headlines, as many of the articles are clearly click-bait - and many of them want to call the winner of the 2020 election before most of the country - about 98% in fact, have yet had an opportunity to vote.   The Washington Post claims that Bernie has a "clear path to dominate the convention!" even though he is so far in second place in terms of delegates.   Others have written off Joe Biden.  And of course the Post and Times have written off Bloomberg based on his debate performance.

Speaking of which, it is amazing to me that Bloomberg has any polling numbers at all - but this illustrates how dumb the American people are.  Based entirely on advertising, he has gained popularity.   I could not tell you what his positions on the issues are, or anything.  I've seen only parts of his campaign ads, before hitting "skip ad" on YouTube (the ad seemed to be a reach out to African-American voters, based on the first five seconds I saw).   You can buy you way onto the debate stage, it seems.  But the papers won't declare you a "winner" unless you pander to their political views.  And this is why I don't trust the papers anymore - they long ago shed any pretense of impartiality.

That's the problem, right there.  I have no idea who is winning and losing the primaries - I don't think anyone can call it at this point.   Trump came out of nowhere as a long-shot candidate, so you never know who will end up on top in the end.   But I can't rely on the mainstream press to report anything in a balanced manner.   Each paper, it seems, has its favorite candidate - or knows which candidate generates the most number of clicks - by lovers or haters - and thus promotes him or her.  That's why I said, I read the headlines, but often don't click.   The headline tells me a lot - particularly when it ends with a question mark, or says something stupid like, "This candidate could win the nomination!" without saying which one in the title.   I've learned that much about the Internet - how to spot click-bait titles.  The sad thing is, this is now the journalistic norm for all the media - mainstream or fringe.

I didn't bother watching the debates - they are less than illuminating and actually painful to watch. How well someone did on the "debate stage" is no indicator, in my mind, as to how well they will govern. The painfully delivered and carefully scripted "zingers" are awful to watch - sort of like the lame sketches on Saturday Night Live during the second half, that go on far longer than the original joke was funny.  If you want to attack an opponent's record, that's fine, but in my mind, a more detailed, written and nuanced argument is more appropriate than some 30-second "sound bite" played over and over again on "the news".

But sadly, America doesn't agree with me. A nation weaned on "reality television" where people getting into arguments is the norm, want heat and not light.  They want to watch these knock-down drag-out professional wrestling moments, and say, "Oh, no she didn't!" while waving their finger at the television.  This is, in short, how we ended up with Trump - who not only had his own reality television show, but appeared on WWF professional wrestling.  I can't remember if he was a "good guy" or a "bad guy" persona on that show.  I know which one he is on The President Show, though.

So maybe that is why people are so quick to call it for Bernie and so quick to bury Biden.  Joe Biden is from the old school of politics, where you have policy positions and stump speeches, and you relied on endorsements from influential newspapers, unions, and other politicians.   He isn't ready for the reality television era of politics.   What the media wants - and what they thing we want - is a colorful candidate who is a contestant on their latest reality show - "Who Wants to Be President, 2020?"   The last thing a game-show host wants is a contestant who isn't colorful enough.  They don't care who wins or loses, its all about ratings.  So they want to keep the tension high and keep the arguments and zingers flying.

This doesn't bode well for the next four years.  Because we know who wins these reality show encounters, in the end.   And who loses - the rest of us.
Newer Post Older Post Home