Point Of Use Hot Water Heaters 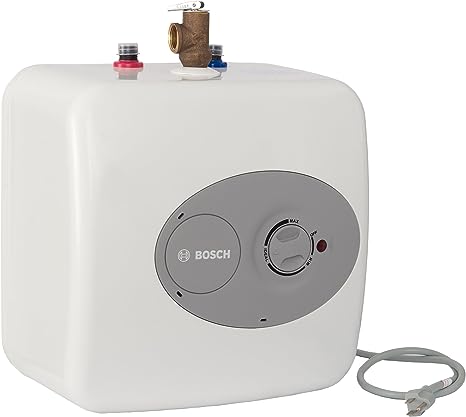 Can these actually save you money?  Perhaps.


We live in a house designed before the energy crises of 1973.   The water lines were steel, laid out in the slab form before concrete was poured.  So far they haven't rusted out, but others have had to replace these by running them through the attic.  I am hoping we will move on before that happens.  I have already laid out, in my mind, where to run the new CPVC lines, with the minimum of sheet rock damage.  By luck or design, most of the water fixtures in our house back up to a closet, so cutting into the wall will be fairly painless.   The hardest part will be climbing up in the attic.

But hopefully that is a future event that will not happen.   In the meantime, the hot water heater is in the garage and the "master bathroom" is on the other side of the house.  To get hot water in the bathroom, you have to run the faucet, wasting gallons of hot water and a lot of electricity as well.  As you might imagine, the slab gets cold, so the water lines running through it go cold quickly as well.

Enter the point-of-use hot water heater.  I first saw one at our favorite Indian restaurant in Alexandria.  They had one mounted on the wall beneath the sink in the restroom, no doubt because the health inspector was unsatisfied with the temperature of the hot water for hand washing.   Long runs from the hot water heater mean no hot water at the sink - the exact same problem we have.

So you run the water - wasting gallons that you pay for in water bills and again in sewer bills, and then you waste electricity to heat all this water, run it down the pipes and then when it gets to the sink, you use it for mere minutes to wash your hands and then let all that hot water go cold again.   Oh, and then there is the convenience factor - wouldn't it be nice to have hot water on demand?

Sure, you can buy "on demand" hot water heaters, but they usually require huge electrical connections.  I looked at one for our barn in New York and it required not one, but two 50-amp connections - more than the load center would support!   They sell 110V units for under-the-sink online on eBay for $59 but they are 3000 Watts.   Doesn't sound like a lot, until you realize that 3000 Watts at 120V is a whopping 25 Amps - more than most home circuits (15-20A) will support.

Small tank heaters, in the range of 2.5 to 6 gallons might be a better option.   They can be plugged into a 110V outlet (which oddly enough, are hard to find under a sink!) and then plumbed into a bathroom or kitchen sink.  They provide "instant" hot water when you need it, and by the time they are expended, the hot water has made its way from the main heater in the garage.

We have two of these, one in the "master" bath and another in Mark's studio, where all we needed was the occasional hand-washing and wine-glass rinsing.   For the most part, they work well, but there are some issues.

Like most hot water heaters, they have a pressure relief valve, and this is necessary to prevent the tanks from bursting should they go over temp.  These pressure relief valves can dribble over time, and sometimes this is normal (our campers all do this - leave a small air pocket at the top of the tank to avoid this problem).   In your garage or basement, this is not an issue.  In most applications, the pressure relief valve is routed into a floor drain or outdoors, so if it dribbles or triggers, it blows the water outside or into a drain.

Under your sink?  Well, that's another story, and if the darn thing leaks, it can ruin your cabinetry or create a mildew mess.   It is a good idea to put a pan or something under one of these heaters, if you have one - something I have done, using a shallow plastic tote bottom.  All plumbing tends to leak a bit over time - even just a drip now and then.  In most cases, evaporation is greater than the leak rate, so you don't notice it.   In other cases, well...  It is always a good idea to shut off your water when you go on vacation.   And you do know where you water shutoff is, right?  And you know it works, right?

Heaters like this are pretty cheap.  I looked online for a new one, as the one in our bathroom has a leaking pressure relief valve.  I am going to try to salvage the old one for use in another sink - it may need a new relief valve.  In the meantime, I am buying an exact copy of it - now sold under the Bosch name (formerly as Ariston) for less than $150 from Walmart.

By the way, I searched online on eBay, Amazon, Walmart, Compact Appliance, Home Depot, and Lowes.   Walmart had the best price, followed by Home Depot, then Amazon, and then Lowes, eBay, and finally Compact Appliance.   Walmart wins again - and again offering two-day shipping without having to join prime.  Jeff Bezos has something to lose sleep over besides his recent divorce.

Granted, it takes some effort to install one of these.  And you may need to buy new hoses and fixtures to install them, which may run another $10 to $20.  The inlet and outlet are NPT (pipe thread) so an adapter is needed, such as a shutoff valve, to convert it to 3/8" compression fittings, and you'll need a 3/8" to 3/8" hose to connect from the main water shutoff to the tank.

Speaking of which, I need to replace the shutoff valves as well.  I have written about these before.  They are supposed to be on every fixture in your house, to shut off water to faucets, toilets, and whatnot.  But since they are used so infrequently (like every ten years when you replace the faucet or toilet) that by the time you need to use it, it is broken.  You turn the handle and either nothing happens (the water is still on) or if it is the "old school" packing-type, it starts leaking profusely, as happened in Gloria's condo.

Quite frankly, plumbing is a nightmare - the idea of putting water pipes hidden behind walls, ceilings, and floors just doesn't seem right to me.   But for the most part, it all works well, until it goes horribly wrong, that is.

Does a point-of-use water heater save money?   Probably not, or not that much.  I guess over the decade we've had this heater in place, we've saved the $150 or so it cost to buy this unit, in terms of water and electricity saved.   According to my most recent sewer and water bill, we are paying a combined $0.0128 a gallon for water and sewer.  If we wash our hands three times a day each, over ten years, and save a gallon every time, that comes to $280 saved over a decade, just in terms of water (electricity might be a little harder to calculate).

Of course, that is making a lot of assumptions.  Before we had the heater, we simply washed with cold water - no one wants to wait several minutes for hot water to arrive.   So convenience and comfort are the main reasons for it.  But cost-savings factor in as well.

While this heater doesn't draw the astounding 25 amps of the Chinese made "inline" heaters that populate eBay, it does 1440 watts, or about 12 Amps.  On a 15 Amp circuit, this is a lot, less so on 20 Amps.  One of my goals is to run a dedicated line to this heater, so I can run other appliances as well (such as a space heater) which right now would over-amp this circuit.  I also want to run a drain line outside for the pressure relief valve, so no "drip pan" is needed.   But that will take some more effort.

Nothing is easy in life.

But one does get tired of maintaining a house.   Eventually, we will move on to something simpler and smaller and leave home maintenance behind.   It is not that our house is falling down around us - far from it.  It is just that any house needs constant maintenance, over time, to keep it in good shape.  Neglect this, and well, eventually everything ends up broken.
Newer Post Older Post Home