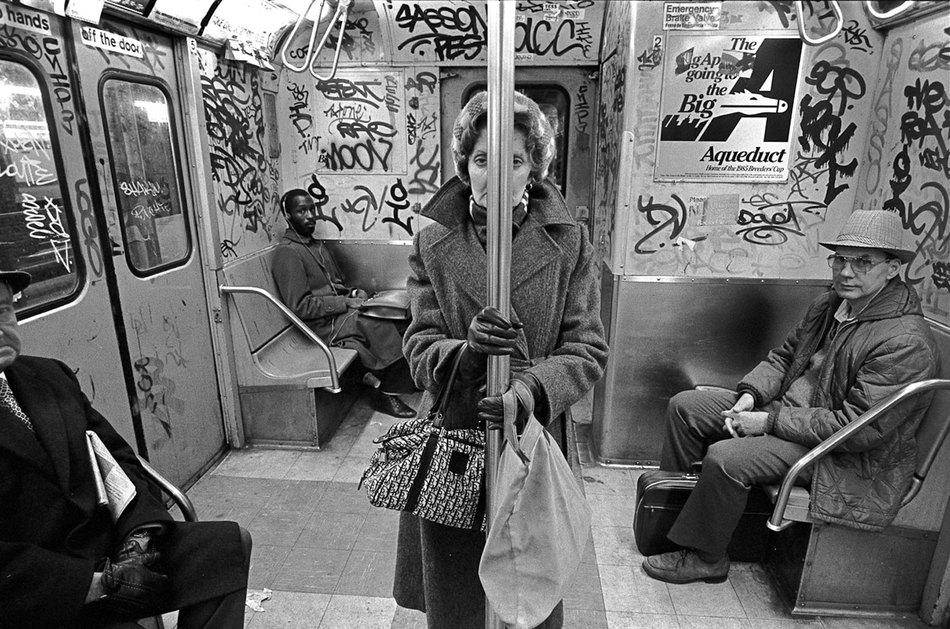 Radical ideas like abolishing the ICE or the Transit Police sound nice in theory, but in practice would be chaos.   Why would anyone advocate the destruction of civilization?


Back in the late 1970's I used to drive my Chevy van to New York City to go to CBGB's and check out the punk rock scene.  New York City was only a few hours drive away.  New York back then was like that episode of the Simpsons (which was banned for a while in re-runs as it featured the World Trade Center) where everyone in the 1970's was a mugger - even the police.   It sounds like parody, but it was not far off the mark.

This is not really far-off the mark.

I recall driving along the river under the UN building and seeing a 1972 Ford LTD wagon sitting in the median on its roof with the wheels removed.  I guess that was easier than jacking it up.  But such was NYC back in the day - abandoned cars were just the norm, slowly stripped for parts and the remaining hulks just littering the streets - with no resources to remove them.

The subway system was dangerous.   You were quite likely to get mugged, and every surface of every subway car - inside and out - was covered with graffiti, as were the walls of all the stations.   Everything reeked of urine.   Track fires and delays were common.  No one gave a shit about anything, particularly the MTA employees.  A young man named Bernhard Goetz shot four black teenagers who he said were threatening him with sharpened screwdrivers.   Half of New York thought Goetz was a bloodthirsty vigilante, the other half nodded their head, having been harassed, intimidated, and threatened on the subway before - if not actually robbed and beaten.

Bear in mind that at the time, things were so bad that actual vigilante groups were formed to patrol the subways and tamp down crime.   But people don't remember that - they remember disco, Studio 54 and cocaine - and the flawed idea that the 1970's were the fun time they see on television shows.

Now, as bad as that all sounds, some folks want to go back to those good old days, which they believe were some sort of Shangri-La.  Not a day goes by when some kid - born long after that era - tells me how "lucky" I was to live in such a wonderful time of corruption, unemployment, high gas prices, even-and-odd gas days, staggering inflation, staggering interest rates, staggering crime rates, and a drug epidemic.

What happened since those glory days?  Nationwide, crime rates and murder rates have dropped precipitously.  Some say it is the aging population, others say it is increased incomes and a healthier economy.  Others argue that higher incarceration rates and "broken window" policing are the cause, the result of people becoming fed up with crime.  The reality is, it is probably a combination of these factors.   That, and an economic resurgence of the United States and New York City (which was near bankruptcy in the 1970's).  New subway cars were bought.  Older ones were rebuilt by Bombardier in an old factory in Auburn, New York.  Increased policing meant no more graffiti.  New Yorkers could ride the subway again without fear - or without as much fear - and experience a clean and well-maintained subway system.   Well, at least for a time.

Early on in this transition were voices - muted at first, but getting louder - that something was being lost in the "gentrification" of neighborhoods and the "Disneyifcation" of Broadway and Times Square.  New York was losing its grittiness, and grittiness was something to be celebrated.   Or was it?  Even today, we are having this debate, as if criminality was part of our "culture" - or the culture of some minority groups - and should be elevated.  There are people out there who believe that criminals are the real victims, and that victims are the real criminals.   And it goes without saying they believe that among the "real" criminals, the Police are the worst of the lot.  Anyone who has a job and a couple of dollars in the bank is an "enemy of the people."

Who are these folks and where do they come from?  Back in the days of Soviet Propaganda - before the era of Russian Propaganda - they had a term for them, "useful idiots."   Now before you cry foul and accuse me of seeing a Russian behind every tree, bear in mind that every country in the world, including the United States uses disinformation, propaganda, and other influencing techniques to shape public opinion in foreign countries.   Here in the US, we had "Radio Free Europe" and "Voice of America" broadcasting "behind the iron curtain" and to Cuba and other countries, selling our way of life and our culture.   That's just an above-board open example of propaganda.   We also used the CIA to spread influence in other foreign countries, by bribing public officials and journalists and other "influencers" and even paying kids to spray anti-communist graffiti around (guess who was paying the kids to spray the pro-communist graffiti?).

We did it, they did it.  Everyone did it.   And we all still do it.   Russia today has more sophisticated means of spreading influence, of course.  They have their overt media channels - RT and Sputnik, for example, as well as their covert Internet Research Agency, which posts comments on Reddit, Youtube, Facebook, and whatnot, spreads vile rumors, tries to organize protests, and generally just throws a Molotov cocktail into the works.   Anyone who denies the influence of Russia in American politics is likely a plant for Russia, period.  To say this isn't happening is being disingenuous or at the very least, being a useful idiot. 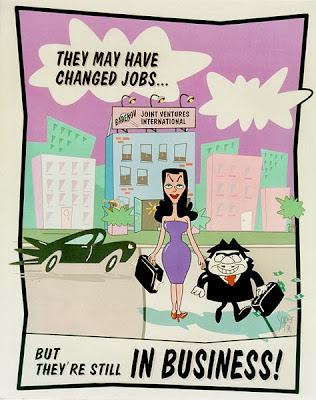 Thanks to a reader for turning me on to this image and site for NSA posters.   It does speak a certain truth!

And no, this doesn't mean your local protest group is funded by and controlled by Boris and Natasha. Influence is far more subtle than that. They may throw a few dollars (through intermediaries) at someone or some group they think may be useful. They may throw some propaganda efforts to support such groups, causes, or individuals.  And often, this is all it takes to move some fringe protest movement to the mainstream - or at least keep it festering and alive as a nuisance to the host country, or perhaps for use later on.  It doesn't matter whether the cause is left-wing or right-wing, the main goal is disruption and disunity - to get Americans divided against one another, or at the very least, expending their energy on unproductive things.

Getting back to our narrative, the term "useful idiot" referred to someone who was willing to follow and support a cause, even if it was against their own self-interest or indeed the self-interest of their country.  They were useful - to the Soviet Union - and they were idiots.

Since the fall of the Soviet Union, not much has changed.  There are legions of "useful idiots" in every country.  We exploit those in foreign countries, foreign countries exploit those in ours. Whether it is recruiting a bored teen for ISIS via the Internet, or getting some weepy liberal to believe in "free everything" the net effect is the same.

Two articles appeared online this morning which contradict each other.  The first recounts how protesters took over Grand Central Station during rush hour, vandalized fare machines, and calling for the elimination of transit police as well as the elimination of all subway fares.  While I cannot personally comment on what the experience of a free subway would be like, I can tell you firsthand what riding the New York Subway without effective transit cops was like - and trust me, you don't want to live through that.

The protesters argue that transit cops are being too aggressive in arresting "turnstile jumpers" who don't want to pay the $2.75 fare (New York still has flat fares?  How quaint!).  They argue that enforcing the laws unfairly targets "black and brown people" who are poor and thus cannot "afford" the minimal fare and thus "have" to jump turnstiles.  Oddly enough, the woman making this argument was white, and in fact, the protest group was a sea of white faces.   Useful idiots.

The second article recounts how a "Transgender" person was assaulted on the subway (by one of those "black or brown persons").  The transit cops arrested the offender, thank you.  This, of course, presents a conundrum for liberals - which identity group do we support here?  Who is the victim?  Who is the offender?  Oh, right, everyone is a victim, and the Police are the offenders!  Didn't they realize that the "person of color" who assaulted the transgender person was merely uninformed and needed re-education?   No need for arrests and harsh treatment!  Typical Police!

The point is, you can't have it both ways.   You can't protect people on the Subway unless you have cops.  And cops have to enforce the laws - all of them.   And turnstile jumping is no laughing matter, nor is it necessary for the poor - even the lowest paying jobs in New York pay well over the vaunted $15 that the SEUI is pushing for.  Turnstile jumping is a lifestyle choice - particularly when you can get away with it.

Once again, the New York subway system is in trouble.   After years of revival, it is falling again into disrepair and neglect.   The new administrator of the system has quit after less than two years on the job, due to disputes with Governor Cuomo (the Governor of a State runs the subway system in one of its cities?).   I am not sure what the dispute is about, but my guess is that the new administrator wasn't handing out "no-show" and "no-work" contracts to Cuomo's mafia friends.  It is only a matter of time before New York subway cars are once again covered from stem to stern with graffiti and a new Bernhard Goetz emerges.

Sadly, this is a trend that is accelerating nationwide. The Washington Metro is facing its own systemic problems, and the only thing people can obsess about is whether a worker on his break can eat a sandwich on the train.   In case you've never been to DC, when it was built, the Metro was a model of cleanliness and efficiency - and eating on the train was verboten. But because an "underpaid Metro worker" (sarcasm light is lit) was caught eating on a train, the twitter-verse torch-and-pitchfork parade was started, and we are just going to throw all those unnecessary rules out the door.

It is funny, though, if you think about it - the coincidence between the timing of the fall of the Soviet Union and the gentrification of New York, the general drop in crime rates in the US, and the rebuilding of the New York subway system.   Just a weird thought, but maybe when the Soviets ran out of money to run disinformation campaigns, Americans came to their senses and put criminals in jail where they belong and stopped feeling sorry for them, and crime rates dropped and life improved.

Then Russia became resurgent, and all you see on Netflix and in the news is how every criminal is innocent, we should let everyone out of jail, abolish the police, the ICE, and open the borders and all sorts of other idiotic and impractical ideas (like forgiving all student loans, making college free, and so on and so forth).

The Russians are back, baby!   And ready to cloud the minds of yet another generation.   Or perhaps Americans just lose their collective minds every 20 years anyway.   Could be either or both!
Newer Post Older Post Home