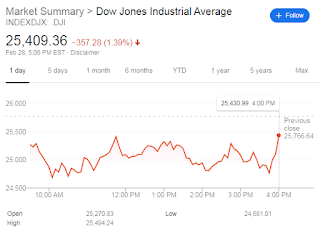 Pundits are arguing that the Coronavirus is crashing the market.  Maybe not.


The market has dropped dramatically in recent days - is this the big crash we've been expecting?  After a decade-long bull market, have the bears come out of hibernation?  Should we be worried?  Should we have been prepared for this inevitability?   The answer to the last question is an unqualified YES.

While the press likes simple stories with easy-to-follow narratives and easily identifiable "bad guys" reality is far more nuanced.  Yes, the Coronavirus might have been a trigger of a sell-off, but the fundamentals, which I have been harping on for over a year, are what is really driving things.   It isn't just lower earnings, companies going bankrupt, companies mired in debt, consumers mired in debt, sales slackening, tariff pains, Brexit, hyper-low interest rates, but a combination of all of that and more.   The market was running on fumes before the Coronavirus.   Every car company on the planet was projecting slower sales in 2020.   Orders for durable goods were retracting.  Several countries were already in recession.  It wasn't hard to see that something was going on.

And like a super-saturated solution of sugar and water, if you tap the glass, suddenly the sugar falls out of solution.  All it takes for that to happen is some triggering event.  So yes, the Coronavirus was a trigger.  No, it was not the cause.

But should we be worried? Maybe - if you just bought a boatload of stocks last week because the shouting guy told you to.  You are doubly screwed if you need that money in the next few weeks or months.  If you have a diversified portfolio, maybe less so.   You have to look at the long game.

The chart above is the DJIA for February 28th.  Not much to be gleened from this - it is just random noise - which we'll get back to, later.  But what about the last five days?  It looks a little scarier: 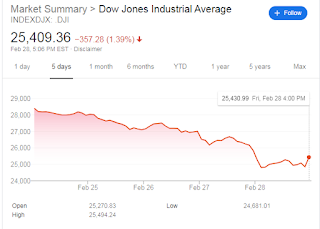 Wow!  Look at that drop!  No wonder the shouting guy is wetting his pants!  Maybe I should sell my stocks - after they went down in value.  Oh wait, I got out of the market last year.   No worries.  But what about the last six months? 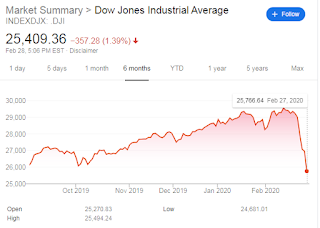 Oh shit!  Head for the lifeboats!  The Titanic is sinking!  All hope is lost!  We're all going to die!  Arrrrgh!

Well, it is true we are all going to die - eventually.  Get used to that.  And markets will crash on occasion, but they inevitably recover - hopefully within your lifetime or timeframe of investing.  If we look at the larger picture, oddly enough, you get back to noise: 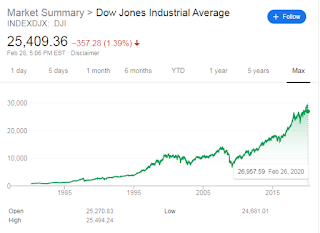 Not only is the drop of the last few days imperceptible as random noise on the signal, much of the gains over the last two years are pretty imperceptible as well.  It all depends on what start and end points you use in your analysis.  If you're Motley Fool, you always use 1930 as your start point when arguing that the stock market has always gone up - because 1929 would skew that statistic quite a bit (it wasn't until after the war that the market finally recovered to pre-crash levels).

Should you be worried about the market?   Well, if you've been paying attention, you've been expecting this sort of thing.  If you are a raging true-believer who listened to the shouting guy, odds are, you are leveraged to the hilt, invested in a few long-shot deals, and will likely be properly fucked in days to come.

I got out of stocks entirely last year, because at age 60, I need the money to live on.   The risk of making more money in stocks was too great - and the benefit too little - for my timeline of investing.  I needed the money today, and tomorrow to spend.  Hoping to make a little bit in the market over 12 months made little sense.  In fact, my portfolio, if left in those stocks, would have gone up in 2019 an then come back down to less than where it was when I cashed out.   So in effect, I lost nothing - no "opportunity" by residing in cash.

Mark still has his mutual funds, and no doubt, they will look ugly in the next few months.  But his timeline of investing is five years behind mine - his funds will recover by the time we need that money - which may be ten years from now or more - if we're lucky.

During the last crash of 2008 - which people don't remember or claimed never happened (or if they do remember, blame on Obama) I saw people in their 70's freaking out because they were totally invested in stocks at an age when they should have been in safe harbors.   Many still had mortgages that they could no longer afford to pay.   They leveraged themselves to the hilt, based on advice from "investment counselors" who said to stay in debt while investing at the same time - the "coffin corner" I talked about before.

Back in 2008, I still had mortgage debt, credit card debts, and even student loan debts.  I was also invested in stocks.  I realized this was not a safe place to be - leveraged in debt while investing in things that could (and did) go down to zero in value.  I was lucky - others lost everything.   But today, I can weather the storm more easily - I have zero debt, a house that is paid-for, and cash in the bank.   Yes, there are still risks - the bank could go bankrupt, and I could lose a lot of my net worth.   But compared to 2008, I am in a far better place.

The question is, anyone who survived the 2008 debacle should be better prepared for the next one, right?  Or is 12 years longer than human financial memory?