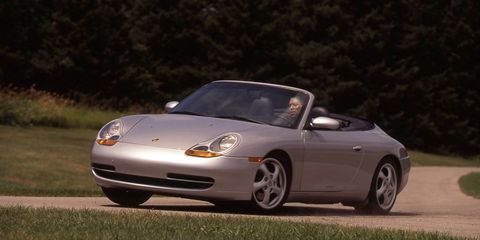 You would think a fancy sports car costs a lot of money, but they don't - after a while.

A friend of mine just bought another Porsche.  Yea, I know what you are going to say - another rich wanker with a fancy car.  But he paid less than $8000 for the car, which was "totaled" and sold at auction for parts.   He bought it because his previous Porsche - which he paid $10,000 for - blew the motor.

He bought the first car at a dealer. It is from the 1990's and had about 80,000 miles on it.  It was a 911 Carrera convertible.  It was a nice car, but was driven and these sorts of cars lose their value quickly if used.  It probably sold for close to $100,000 when new - it has fallen a long way.  Old Mercedes, BMWs, and Porches depreciate down to nothing after a while, as they are expensive to fix and the cost of repairs exceeds resale value - a self-fulfilling prophesy.   So they go to the scrap yard or sell for nothing, at a higher rate than more plebeian cars.

The car ran great for a while, but one day the timing chain broke, and the pistons then hit the valves (an interference engine) and that was that.  Yes, it could have been fixed, but the cost of an engine swap exceeded the purchase price of the vehicle.

He bought a wrecked 911 online for less than $8000 with the idea of swapping the engine and then selling off the other parts.   But when the car arrived, it turned out to be in better condition that the car he was going to put the motor in.  It had a nicer interior, fewer miles, and a hard top to boot!   The car was in a wreck, which took off the front and rear bumpers and lights, and cracked a couple of rims.   The cost of these repairs exceeded the book value of the car, so the insurance company paid out the book value and the car was sold with a salvage title.

After looking at it, it seemed like a no-brainer to fix the salvage title car, as bumpers are a lot easier to replace than engines.   Yes, a salvage title is a hassle - it makes it hard to sell the car later on.  But for a car costing $10,000 including repairs - who cares?  Likely he will throw it away when he is done with it.

Are cars like this a good deal?   If you are looking for a hobby car, maybe.  But hobby cars are not general transportation, but toys to play with.  You can't rely on them to take you to work on Monday morning when it was 32 degrees overnight.  And you have to be handy with tools and know how to fix such cars - and know what to look for.   A hobby car can turn into a fright pig in no time.

If  you want a hobby and are handy with tools, go for it.  But don't expect such cars to be economical or reliable transportation - if you want that, buy a secondhand Camry or Accord that is 2-3 years old, with low miles, off-lease.

At the other end of the spectrum, who is paying $100,000 or more for cars like these?  No doubt the salesman told them the car had "low depreciation" but in reality, BMWs, Mercedes, and Porsches depreciate about 50% every five years, like most cars (American cars depreciate more only because no one ever pays even close to list price when new - foreign car makers don't play that game as much).   So the $100,000 car is worth less than $50,000 in five years, $25,000 in ten, and maybe worth five grand after fifteen or so.   When you buy a more expensive car, you are just buying more depreciation.   The $30,000 Camry might not be as fancy, but in ten years, you've lost a lot less money to depreciation, and likey that Camry never broke down and left you stranded, waiting for a flat-bed tow truck.

I hope my friend has fun with his new toy.  But he probably realizes that it is just one timing chain away from oblivion.   I suspect a lot of Porsches end up this way - going to the wrecking yard with less than 100,000 miles on the clock.  Those that don't, sell for cheap.  A quick check online seems to confirm this.  They seem to sell like Corvette C5's. The few that go beyond 100K have had their engines replaced - and still sell for not a lot of money!