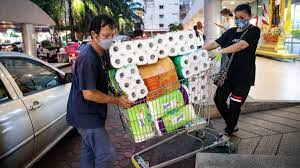 I hesitate to even write this.  If I even mention the toilet paper hoarding that is (or at least was) going on, it will only prompt people to think, "Hmmmm.... there is a toilet paper shortage - I'd better buy some!" and the whole problem bootstraps itself.  As I noted in an earlier posting:


We stopped by the Walmart, where people were frantically putting cases of water and toilet paper in their carts.  It was a mob scene,with the employees bringing out pallets of water, which were quickly stripped bare, as if by piranha.   Lots of shouting and hollering going on.  Apparently they're going to go home, stay hydrated, and shit their guts out. The cold and flu section was also completely ravaged as well.

It was infectious, too - moreso than the virus.  Mark said, "Gee, maybe we should get some water, too!" and then I reminded him we bought a case not long ago - not because we were paranoid about the virus, but because we were camping.   Oh, and the trailer has a 40-gallon fresh water tank that is full.  I think we are fine in the water department, and the virus isn't going to shut off tap water anytime soon.

Hoarding works the same way.   People react to hoarding by others by hoarding of their own.  And sadly, efforts to curb hoarding end up causing more hoarding.  So when stores say "due to short supply, limit five per customer!" people who wanted to buy one roll of toilet paper will buy five (the suggested amount, after all) and the folks who weren't going to buy at all, end up buying.  "Gee, there's a toilet paper shortage, I guess I'd better buy some!"

Worse yet are government attempts to "cure" shortages with price controls or "anti-gouging" laws or regulations.  These serve only to increase shortages, as the incentive to supply the masses evaporates overnight.   If someone is paying $20 for a roll of toilet paper (the current meme which has no basis in reality) then someone, somewhere, would go out and find a roll for them - perhaps from their own bathroom vanity.   The hoarder will sell his hoard when he realizes that prices are berserk - or at least one will.  Then the price drops to $19 a roll - and another hoarder sells out "before the price drops further!" until no one is hoarding and the price is back to normal.

When you limit sales or control prices artificially, this serves only to increase the perception that there is a shortage and that prices should be higher - encouraging more hoarding.  Once people realize there is no shortage (and with toilet paper today, there was no, is no, and will be no shortage of this commodity, if Georgia-Pacific has anything to say about it) they stop panic buying.

It is akin to the change shortage that occurred in Argentina a few years' back.   People got the idea in their head that there was a shortage of change for bus fare.  Probably some person got on the bus and said, "Gee, I have no change!" and someone heard this and said, "there is no change!" and then told a friend - probably on Facebook - and before long, people started hoarding change, deluging banks for change, and voila! a change shortage actually occurred.

Over time, people realize there is no real change shortage, and eventually, people wake up one day and realize there is a jar of change on their desk for no reason.   No doubt in a week or two - if not already - people will realize they have more toilet paper than they need until the end of 2020, and no one is going to pay them $20 a roll for it.

What happens in the marketplace?  Well, as prices and demand go up, people rush in with more supply.  Walmart is stocking the shelves with toilet paper as we speak.  Paper mills are making it.  Truckers are trucking it.  We won't run out.   In Argentina, the mints produced more change, banks distributed it, and eventually, people realized they had enough.

Or, people turn to alternatives.   Bottled water in short supply?  Drink tap water and put it in those reusable bottles of which you have twenty of (as they give them away as promotional items).   No change for the bus?  Eventually, the bus company will install a card reader or just raise fares to an even paper peso paper currency amount.  Out of toilet paper?  Our ancestors did without, using all sorts of alternatives, including wash cloths (that were sanitized and re-used).   But I doubt it will get to that.

Sadly, these things take on a life of their own.  Articles are written about the "shortage".  TeeVee news pieces are done showing frantic shoppers and empty shelves.  Editorial cartoons show people hoarding toilet paper.  Other articles and opinion pieces exhort people not to hoard toilet tissue.  Each time this is mentioned, it merely bootstraps the deal - raising awareness in the minds of consumers that there is a "shortage" and "we'd better get some!"

But what is the underlying cause of this?  A number of  things, I think.  First is fear.  People are afraid of running out of something, and if reports come in that something is in short supply, it bootstraps that fear.   All it takes is for one shopper to see someone with a stack of toilet paper in their cart, and they, too, will decide they need to buy some.  It probably started with just one person - just like this virus.

Status is the second thing.  Everyone wants to be "the guy" who is luxuriating in quarantine, with an ample supply of bottled water and toilet paper (and apparently meat).  "Those other bastards are suffering!" they say, "I'm wiping my ass with an entire roll of toilet paper every day!"  It is akin to the Christmas shopping nightmare every year, where the media anoints some product as this year's Cabbage Patch doll or Tickle-me Elmo, and people start fighting over them.  "I won!" they seem to be saying, if they secure the coveted toy for their kids.

And you laugh, but it is true.  I recall the whole "Cabbage Patch" thing, where people (mostly white trash) lusted after these ugly little dolls, and when they got them, encouraged their kids to carry it everywhere with them so as to show off that their child  has the desired toy!   Who the fuck carries dolls to the grocery store?  No one, until this Cabbage Patch nonsense.

The third reason is the same reason hoarders hoard junk in their homes.  They perceive something to be valuable, and thus keep it, even when it has a trivial real-world value.  The want to "rescue" the world by being the person with the desired item at the right place and at the right time.  Thus, we are treated to stories in the media about "hero toilet paper man" who stands on a street corner handing out rolls of toilet paper as a savior to us all (who the fuck needs Jesus anymore?).   Like any hoarder, he is acting out his save-the-day scenario.  It is sick thinking, really.

Hell is other people - and we are seeing this today, with this virus thing.   The virus itself is bad, but human behavior is even worse.   We are seeing people intentionally flaunting safety guidelines just to act out the "bad boy" behavior.  Others are running around as virus vigilantes either in person or on Facebook.  Politicians are either doing too little or too much.  The media is hyping the whole thing for ratings.  People are hoarding nonsensical items like bottled water and toilet paper, crowding into stores to buy them - not realizing that is the prime place to get the virus in the first place.

China is already seeing the epidemic peter out, after a month or two of quarantine.   Those that got the virus either lived (about 97%) or died.  The rest never got it.   Life is going back to normal there, and we can expect the same to happen in America - and the rest of the world - in a few weeks or months at the latest.

Stories about "bodies stacking up at the morgue" and whatnot are sensational, but tend to overstate the case.   More people died on the highways in America trying to get home from vacation or back to Canada than have died from this virus.   In fact, probably by a factor of ten or so.   Every two or three days, more people die in car accidents than have died from this virus in the United States.   Even if thousands die - in a nation of 330 million - it pales in comparison to the overall death rate.

This is not to trivialize the virus (again, take your damning and shaming elsewhere - no sale here!) only to point out reality.   There is no toilet paper shortage.  There is no bottled water shortage.  And life will return to "normal" faster than you think it will - although the new normal may be slightly different than the previous one, as I noted before.

But this ain't the end of the world - by a long shot.
Newer Post Older Post Home