People Are Enjoying This Way Too Much 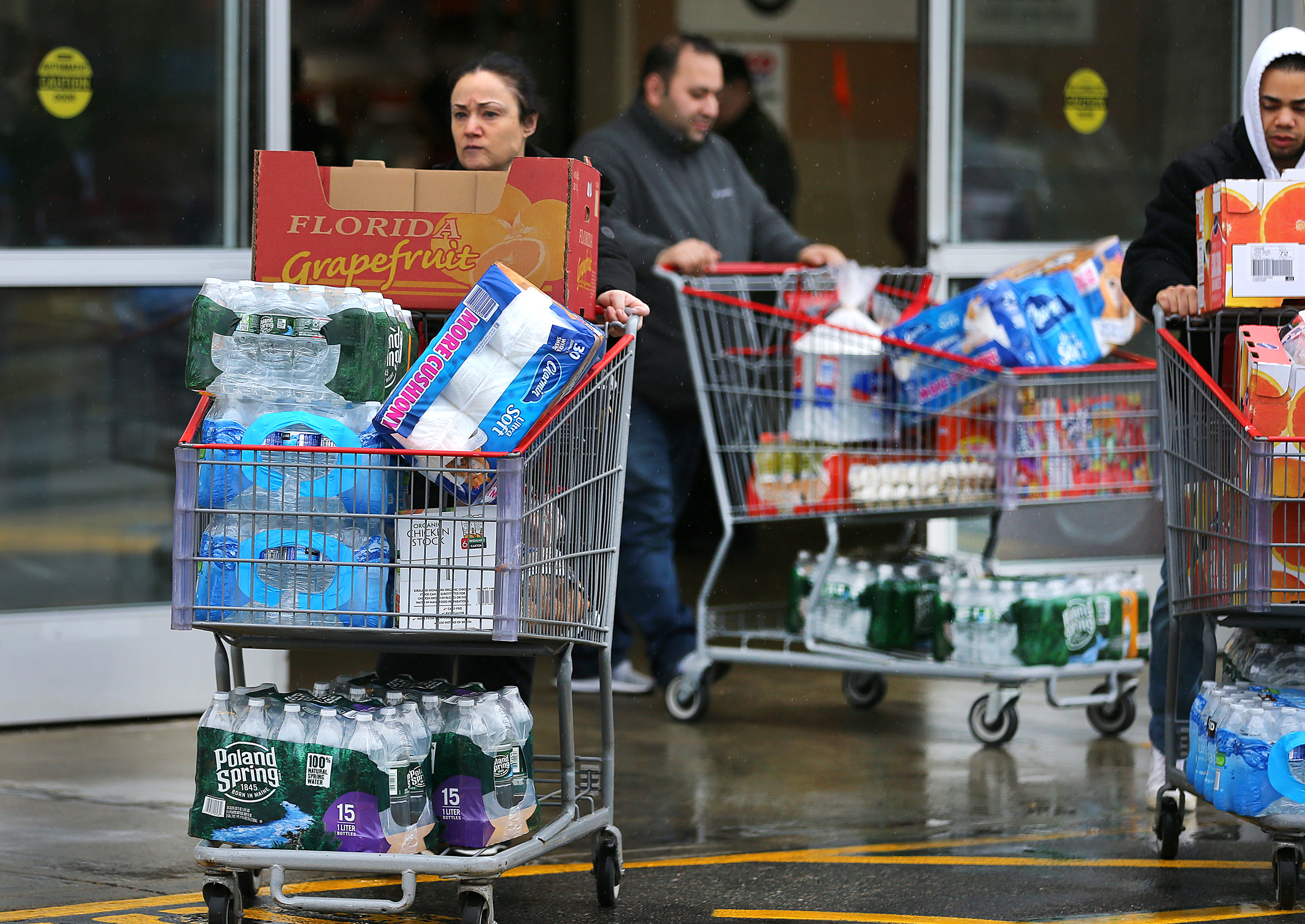 Some people apparently want to see the end of the world.

We left splendid isolation on Pine Island, where people seem to be mostly sane, and went to Ft Lauderdale, where people have apparently lost their minds.  We stopped by the Walmart, where people were frantically putting cases of water and toilet paper in their carts.  It was a mob scene, with the employees bringing out pallets of water, which were quickly stripped bare, as if by piranha.   Lots of shouting and hollering going on.  Apparently they're going to go home, stay hydrated, and shit their guts out. The cold and flu section was also completely ravaged as well.

It was infectious, too - moreso than the virus.  Mark said, "Gee, maybe we should get some water, too!" and then I reminded him we bought a case not long ago - not because we were paranoid about the virus, but because we were camping.   Oh, and the trailer has a 40-gallon fresh water tank that is full.  I think we are fine in the water department, and the virus isn't going to shut off tap water anytime soon.

We were just doing ordinary shopping, but people had this panicked look in their faces and were buying just about anything they can get their hands on.  Canned goods were also in short supply, but not things like green beans, but prepared foods.  Chef Boyardee is having a field day.  Good news for the ravaged "packaged foods" business.

It struck me that people are enjoying this perhaps a bit too much. I noted before that in Washington DC, whenever there was a snowstorm, people would declare that the end of the world was nigh and go to Safeway and buy every last carton of eggs and loaf of bread available. They apparently felt that civilization itself would grind to a halt, because there were two inches of snow on the Beltway.  In one celebrated instance, after I had recently moved to Washington, people actually abandoned their cars on the Beltway, leaving the doors open and the engine running as if there was no point in even trying anymore.

I blame the dystopian movies and TV shows as well as video games.  We raised an entire generation of young people who've spent their spare time shooting at zombies on their Xbox or watching zombie television shows. They even filmed one here on Jekyll Island.  People are so primed for the apocalypse, they can't wait for it to happen.  Once the end times come, they won't have to pay back their student loans and all that money they spent on guns will turn out to be a good investment!  Who will be laughing then?

Perhaps there's only a matter of time before somebody starts gunning down somebody because they suspect them of having the Corona Virus. We saw this with the HIV epidemic, where people were beating to death gay people on the grounds that they were spreading disease.  Of course, the easiest way to catch HIV is through blood transfer, which is quite easy to do when you're beating someone. But they didn't quite understand that.

Thank God all this training in video games to shoot out zombies won't go to waste!

I'm hoping that in two or three weeks this will blow over - hopefully before then.  People will realize that the entire world isn't grinding to a halt, and moreover that everyone isn't dying.  But it will takes a while for that to happen.  And when it does, suddenly the stack of bottled water in the living room will seem stupid, along with wearing masks and rubber gloves.  And people will conveniently forget that they succumbed to panic and paranoia.

In the meantime, the media is having a field day. They too, are enjoying this way too much. People are staying home and watching endless hours of television, keeping up on virus paranoia 4.0.  This means great ratings for the television companies.  It's also driving up click rate on articles about the Corona Virus. Even national public radio has gotten into the act, apparently broadcasting 24/7 about the crisis.  No longer is the election of any importance.

Politicians, of course, are making hay out of the whole thing. Donald Trump is blaming the entire thing on Obama, while Nancy Pelosi is blaming the entire thing on Donald Trump. Both are right in both are wrong.   If politicians did absolutely nothing, and no one took any action whatsoever, this entire virus would blow over in about a month or two, killing off about 3% of the population the United States. That sounds pretty awful, but I'm not sure that all these steps we're taking right now we're going to change that outcome very much.

A reader takes me to task for saying getting tested is pretty pointless.  Testing, he says, will help the CDC track the virus and isolate those exposed.   Coming from the age of AIDS, I say, good luck with that.  Because if you were exposed, and then went to Walmart to buy water, how many people have you infected?  Do you know their names or have their addresses?

At the height of the AIDS epidemic, they tried to do the same thing - coercing the names of your "sex partners" if you tested positive for the disease.   But back then, your "sex partner" might have been "some guy with a big dick" that they met at a backroom bar.  Tracking down people to test and isolate them turned out not to be an effective strategy - and HIV was a damn sight harder to acquire than the Corona Virus.  Testing can also give people a false sense of security - and encourage them to engage in riskier behavior.

No, I don't think testing is the answer.   I think education is one good idea.  But like any epidemic, it eventually peaks and then recedes, whether it is HIV, opiods, or this Corona Virus.   And yes, it is tragic that before it dies down, a lot of people will die.

The campground we are in right now is deserted. Large numbers of people are canceling their reservations.   One of the parks we hope to visit on the way home is closed due to the virus. Someone joked they make quarantine our island.  I certainly hope not, at least not before we get there.  However, many group events such as the arts festival and the turtle crawl triathlon have been cancelled.

We are fortunate in that our house is well stocked with food, and ironically, toilet paper as we had just recently gone to the wholesale club a few weeks ago.  We're also fortunate that we don't have to work for a living at this point, and thus have no reason to leave the house or spend money.

But many others are going to suffer, not from the Corona Virus. They're going to suffer because their jobs are going to go away because people are going to stop spending money. People in the airline industry are feeling it already.  Many other people will feel it next.  As schools closed, many parents will find no place for their kids to be warehoused while they're off at work, presuming they still have a job.  Child day care centers will have to close because they will become petri dishes for the virus as well.

On the other hand, Donald Trump might get re-elected, as long as he can point to the virus as causing the recession instead of his fiscal policy.  Someone might get to keep their job.   Many have argued, including myself, that the recession was long overdue, and that Trump's policies of lowering taxes and lowering interest rates, as well as increased deficit spending are going to make the resulting recession worse.

Without the Corona Virus, Trump would have to own the recession and this would probably hurt his re-election chances in the fall.  But now he can argue that the recession is not due to any action on his part, but rather an act of God.  This does not bode well for the Democrats.

A lot of people will get hurt by this virus - not the disease itself, but the panic being fostered by the politicians and the media.  Buying toilet paper and bottled water makes no sense whatsoever.  Neither staple is useful in fighting the virus, and neither staple will be in short supply, today, tomorrow, or in the future.