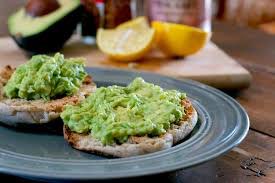 Is Avocado Toast really bankrupting Millennials?  Not unless they are buying it at a restaurant.


Leave it to millennials to ruin everything, including avocados.  Just kidding.  But seriously, this "meme" that millennials are all eating avocados and running up the price of them makes me feel conspicuous when buying the damn things.  And today, avocados are dirt cheap - a package of five is seven dollars at the wholesale club, other places, about a buck apiece.

They are good, and good for you, although high in calories.  1/5 of an avocado has 80 calories, eating a whole one would be a whopping 400 calories - 1/5th your daily intake!  Of course, most folks don't eat a whole avocado at one sitting.

The media is abound with stories that millennials are going broke buying "avocado toast" which I guess is a sandwich of some sort.   On the way back home, we stopped at the wholesale club to replenish our larder (and DID NOT buy toilet paper or bottled water! But more about that later - even mentioning these things triggers an urge to buy in many people).   They were all out of eggs - again, the hoarders at work - so Mark bought some avocados.

Every morning we have a breakfast sandwich, and today he toasted some English muffins (a BOGO at the Publix on Pine Island) with 1/4 avocado on each open face, with some hot sauce and some bacon bits (sold at Wal Mart, unrefrigerated until opened).   Not a bad breakfast, and not all that expensive, either.

If you figure that each avocado cost $1.40 and each avocado serves two people, the cost per serving is about 70 cents each.   Throw in another 25 cents for bacon bits and maybe 25 cents for the muffin, and you're talking under a $1.25 per serving - on par with my breakfast sandwich meal we usually make (sans hash browns, which we don't have very often anyway).

As you can see, you won't go broke eating a $1.25 breakfast, but you will if you pay $10 or more at a restaurant.  Apparently this "meme" came about based on a 60 Minutes - Australia - interview with a millionaire who noted that he didn't get rich buying $19 avocado sandwiches and $4 coffees.  Today, the Australian dollar is worth an astoundingly low 58 cents, so I guess avocado sandwiches are like ten bucks - that's still a lot of money.  I am guessing that the use of the word "avocado" makes it sound like an exotic luxury, instead of just food.

But the point is a valid one - if you are eating in cafes and restaurants all the time, you will  go broke, on a middle-class salary.  And young folks do this - and we all did it - because let's face it, it's fun to do.  Hemingway didn't sit all day at Le Dôme Café in Paris because he wanted something to eat - it was a place to see and be seen, to meet up with your friends, and socialize - something this quarantine is putting an end to.   Newspaper articles abound with more damning and shaming of millenials for partying and going to the beach and socializing when their wiser (and more vulnerable) elders are staying at home to avoid exposure to the Corona Virus (as opposed to just Coronas).

So it has nothing to do with avocados per se, but with dining out, which is something younger people like to do, in order to socialize.    When I was younger, I liked to socialize, too, but I also realized it was an expensive proposition.   I could buy an entire six-pack of beer for the cost of one draft at the bar.  In fact, draft beer, at the time, cost as little as ten cents a glass, if you tapped a keg at home.  With the help of an old refrigerator and hole saw, you can make your own keg-cooler for home consumption.  For only a few dollars, you can put yourself in the hospital, if you wanted to.   I tried this, and found out the hard way that temptation was indeed great.

As you get older, the idea of going to noisy, crowded bars or restaurants and spending tens of dollars (if not well over a hundred) on food and drink becomes less attractive.   Older people tend to stay at home more, or seek out bargains, either at bargain-priced restaurants (hence the popularity of "Cracker Barrel" with the white-haired set) or bargain offers (the "Early Bird Special" also popular with ditto).

As the link above notes, the fellow who made the initial quote about avocado toast wasn't singling out this fruit (and I guess it is a fruit) for specific abuse.  Rather, he was pointing out that he spent long hours every day, from early in the morning to late at night, working at his business.  He had no time for socializing or eating out in restaurants.  If you want to make money, you have to work, not play.  And it is a conscious choice, too.

You can work at a "job" and put in the minimum number of hours required and make enough to "get by" and spend your evenings with friends eating out or going to bars.  I know this, as I did it at one time.  I also - after giving up drinking  and drugs - worked multiple jobs at once and went to school and got a lot accomplished.   It is amazing what you can do, if you put  your mind to it.

It is a trade-off, and if you prefer to make less money and have "a social life" then fine - but be satisfied with that choice, as it is indeed a choice.  As I noted in another posting, a guy who paid off his mortgage in a few short years by working multiple jobs was shamed and damned for doing so.  "So you own your house?  But at what expense to your social life?" one quipped - as if hanging out in bars and restaurants with friends for hours on end had some priceless value to them - and perhaps it does.   But again, this is a choice they make, not a mandate.

What irks the workers of the world is when the slackers want all the benefits of being a worker, without all that pesky work part.   "You got lucky!" they say, "You have money!" - as if all those years of 60-hour workweeks (plus some!) and the angst and worry of running your own business equated to all those hours they spent imprinting their ass onto the top of  a bar stool.

So let''s leave the avocados alone - and the millennials as well - because avocados are innocent actors in all of this, and many millennials are working hard and saving money.  We only hear about the whiners and complainers because they have a lot of time on their hands to whine and complain.  The folks working hard and socking away money - of any generation - tend not to be the kind who are protesting wall street or posting memes on Reddit.
Newer Post Older Post Home