Breaking Up Isn't Hard To Do...If You Have Help 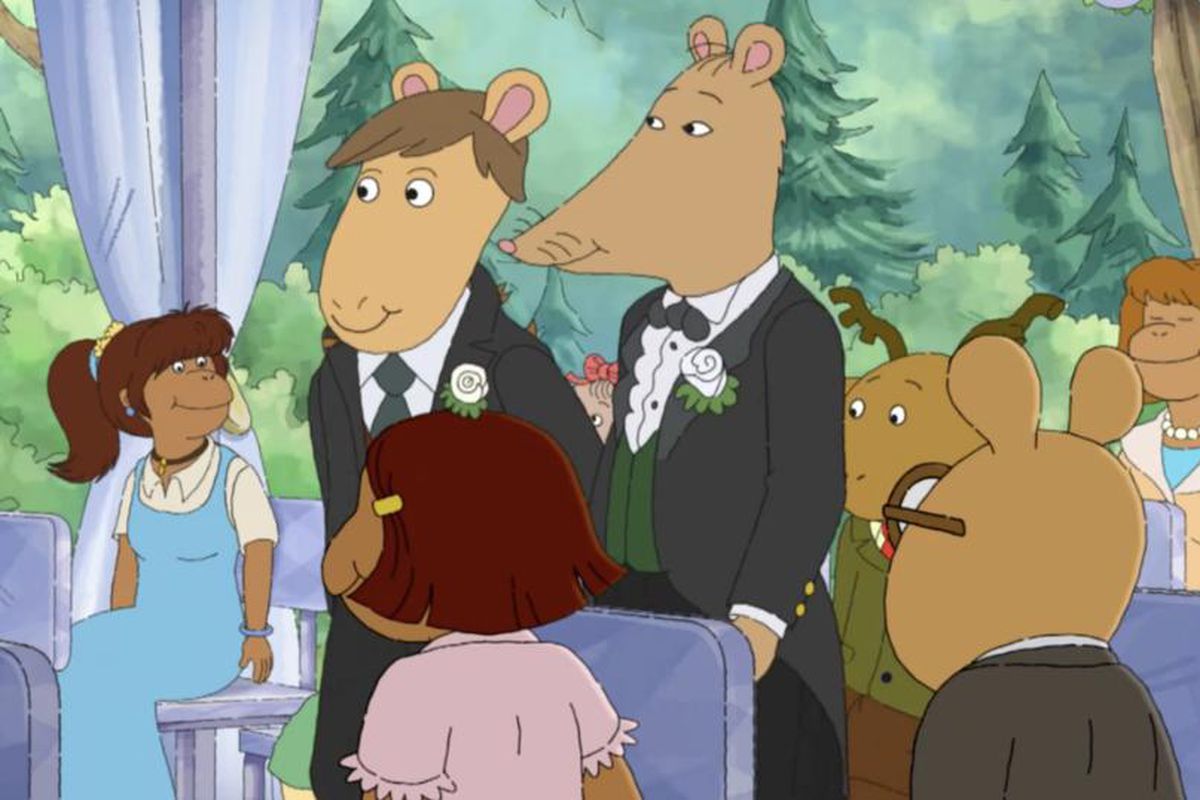 In the gay community there are actually people who set out to break up happy couples. Why would somebody do this?  Yea, I'm looking at you, Arthur!  Passive-aggressive jerk.

By the way, it is unnatural for a rat to marry an aardvark, gay or otherwise.

In a previous posting about parents, children, and the crab-bucket mentality, I postulated that sometimes parents are jealous of the success of their own children and will try to squash ambition in their kids in order to aggrandize themselves.  This sounds very sick and depraved, but I've seen it happen, firsthand. Many a parent loves to lord over the ruined lives of their children in order to make themselves feel superior and important.  For this reason, as a child, it often means you have to break free of the parental influence and seek out your own norms and goals in life.  Many simply feel they cannot do this.

It struck me that this was very similar to another scenario I've seen in my life. When I was much younger, I used to go to the gay bars in Syracuse such as they were (most have since closed, because kids today can go to any bar they want to).   It was all very exciting, being young and out for the first time.  And I wanted to have a significant other or boyfriend to spend my life with.

I met a young man who was very nice, but unfortunately had some mental health issues.  Sadly, I discovered recently that he has since passed away.  People with mental health issues tend not to live very long for one reason or another.  Coming from a family of mentally ill people, I guess I felt drawn to him. It took me a long time to realize that it was not a healthy thing to be in a relationship where someone is dependent on you or where you are always propping them up, emotionally.

But compounding all the difficulties we had in this relationship, was the fact that other gay people wanted to break us up - as some sort of perverse sport.  No one is happy to see other people happy, for some reason. Back then in the gay community, many were jealous to see people in committed relationships.

I digress, but I mentioned this before - the "Mexican Grimace".  If you see someone Mexican in Mexico that you know, waiting for a bus, they are frowning as though their dog just died.  Then they see you and their face lights up.   It doesn't pay to be smiling in Mexico (or on the New York City Subway) as people will think you must be too damn happy about something and then decide to rob you.   So people act unhappy as a shield against intervention by others - so others don't feel the need to knock them down a notch.  Human nature is a wonderful thing.  But again, I digress, but not by much.

We were in a bar one night with some friends, and one of my friends told me, "Look out for that guy over there," referring to someone across the room who was staring at me, "He lives to break up gay couples!"  I asked him to clarify what he meant, and he repeated himself.  He elaborated further, saying that this fellow set out to find happy committed gay couples and then intentionally tried to destroy their relationships.

I was sort of a flabbergasted.  How could this possibly be true?   What motivation would he have to do such a thing?  Why would he do this?  What joy would anyone have in trying to break up relationship?

But alas, I found out it was true.  He soon approached me and tried to insert himself between me and my partner.  He started talking trash about my partner, claiming that he was seeing other people, and suggested that I should perhaps go out with him instead.

My partner and I exchange notes later on, and found out he was saying the same thing to him, implying that I was playing the field and why shouldn't my partner go out with him instead?

Of course, maybe people like that want to break up gay couples because they are harder to break up.  A recent study suggests that gay marriages are half as likely to break up as heterosexual ones, and lesbian marriages half-again as likely as heterosexual ones, to end in divorce.  The authors of the study opine that women have "higher relationship standards" than men, hence the male-male relationship is the most stable, as basically men just don't give a shit.   However, I question the methodology and conclusions drawn therefrom.  A study of a few hundred people, limited to Vermont (which is contains a typical cross-section of Americans - not!) isn't very deep.   I smell the Bureau of Specious Statistics at work at again!  So relax, ladies, you're not all that high-maintenance!

Getting back to our topic, I was kind of horrified by the entire thing.  People like this really existed.  It made me feel very sad about humanity. What sort of sick individual go out of their way to try to make other people unhappy?  Apparently the lessons I learned in High School had already been forgotten.

Yea, that.  In High School there were plenty of miserable people who felt that making other people miserable would make them happier.   These are the sort of folks for whom High School was the peak of their lives, and they wanted to shout down anyone who had plans for after graduation.

Of course, the keywords are sick individual. This fellow had some mental health issues of his own, and apparently he felt some sort of thrill of control and trying to manipulate other people.  People like that are, by definition, mentally ill.

I mentioned before in an earlier posting about a lady that worked for Mark at the gourmet food store. She was an angry lesbian - are there any other kind?   She tried to stir up the pot with passive-aggressive bullshit.  One day I drove up to the store to pick up Mark and she came out to our car and said that Mark was angry with me because he was waiting out at the loading dock.  So I drove around to the loading dock just as Mark came out the front door.  She told Mark that I was angry with him because I had been waiting for a long time out by the loading dock.   So Mark went out to the loading dock, while meanwhile, I drove back out front.  She played this game several times until finally Mark and I hooked up and realized that she had been playing us against each other.  Fortunately, Mark had a chance to fire her later on.  People like that are scum.

She was an angry and depressed and mentally ill person, and rather than try to turn her life around, she felt that by destroying other people's lives, she could make herself feel better.  It's a pretty sick way of thinking, but I guess some people feel this way.  If they can drag other people down, then that makes themselves seem better by comparison.

So what's the point of all of this?  Only that people can be very evil, sometimes intentionally, sometimes subconsciously.  There are actually people in this world who will set out to sabotage your life just for the thrill and joy of seeing you suffer.  These are sick, sick individuals and are psychopaths or sociopaths.  But then again, there are other people who do very similar things and don't do it at a conscious level.  Subconsciously, they may be feel threatened by your success, and by passive-aggressively tearing down your life, they can make themselves feel in control and superior to you.  Sadly, these can sometimes be family members, parents, or even friends.

I wrote before about a coworker who took me out for lunch every day for weeks, where he would run down the law firm we worked at and kept telling me I should quit.   And eventually, I did, and started my own practice.   He was then promoted to junior partner.   He wanted me out of the way, so he could succeed.   My leaving prompted them to promote him, lest they lose another good lawyer.   Did he do this intentionally or subconsciously?   Either way, it makes no difference.   Funny thing, at the time, I noticed he was doing this and sort of parsed out his motivations.   I kept going out to lunch with him anyway, just for the free sandwiches.

Figuring this out, when you were at the ground level, is often hard to do. It's only sometimes later in life that you finally figure what happened.  But if you can detect it early on, you can save yourself and awfu lot of grief.

What is interesting to me, is that a friend of mine tried to warn me about this fellow in the gay bar - that he would try to break me up from my partner, and yet I refused to believe it because I didn't think such a thing was possible.  What possible motivation would somebody have to do such a thing?  I had a naive belief in the underlying decency of human beings, perhaps a belief that was at the very least, an over-estimate.

Since then, my approach to other people has changed somewhat.  But you can't let the actions of a few assholes turn you into a jaded human being who distrusts everyone.  Because if you do that, then the assholes win, yet again.   Maybe they haven't destroyed your life, but they've turned you into a jaded and angry human being with trust issues.

There is, I believe, a happy medium. It's possible to have loving and trusting relationships with people and to accept other people as friends without being a patsy at the same time. You can like people and even love them, without being victims of their machinations, regardless of whether they are overt or subliminal.

The secret, I believe, is to realize that almost everyone has evil motivations of one sort or another at some time, and they might not even be aware of these motivations when they're doing them.  Such people can be your friends and families and even lovers and partners, but that doesn't mean you have to hate them, only to try to understand them and their motivations.

The other group - the folks who intentionally set out to destroy the lives of others are just plain evil people.  And if you can spot these early on and avoid them, the better off you'll be.

People will try to tear you down.

"Hell is other people," as Jean Paul Sarte once said.  Or some others put it, people are great individually but in the aggregate can be horrific.  Human nature is what it is, and I guess another realization of this entire scenario is that we also have our own motivations that are not necessarily healthy.  We too, become jealous of the success of others and perhaps try to sabotage and rundown other people's lives without realizing it.

The secret is to try to realize when we're doing these things and tamp down that sort of behavior.
Newer Post Older Post Home