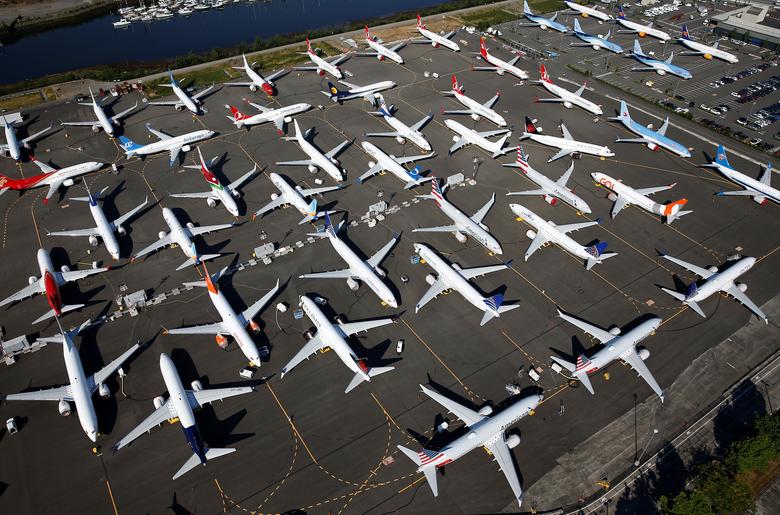 Will Boeing bring down the entire economy?  In part.


Denial is a powerful thing, and we've been living in denial for the last year.  Boeing comes out with a new plane - well an old plane with new engines and avionics - and it sells like hotcakes.   Two crashes later, there is a "software problem" but quickly it is revealed to be a design flaw that software tried to fix - and failed badly at.   But no problem, Boeing will keep making the planes and in a month or two, the FAA will approve the software patch and everything will be back to normal.

That was a year ago.   Since then, airlines have made other plans, including buying Airbus Neo's.   And unused 737Max's are stacked up at various airports, waiting for the elusive FAA approval to fly.   The airlines aren't planning on putting them back into the air until after the summer season.

Enter the Coronavirus.   At the time of the 737 Max fiasco, airlines scrambled to find planes and cut back on expansion plans.   Now, with planes flying half-empty (or half-full for you optimists out there) they might be more inclined to delay delivery of their 737 Max's that are sitting in storage.   In retrospect, the 737 Max fiasco turns out to have perfect timing for the airlines, who now don't have to pay for expensive planes they can't fill with passengers, anyway.

Boeing has a real problem, now, and it is likely that it may take years before these parked planes make it into service.  And of course, machinery really likes to sit, unused, for years on end, too.  Not only is this a problem for Boeing, but for the many suppliers of avionics, engines, and various airframe parts.

The recent massive decline in air travel brings up a salient point:  Is air travel all that necessary?  After 9/11 a similar thing happened - people stopped flying.  We had a condo in Florida, and we could fly down on a $30 airfare, with an upgrade - at the gate - to first class for another $15.   Even then, the plane wasn't full.   What happened?   All these people were scrambling to get on airplanes only a few months before, and now you couldn't drag them on one?

Is air travel all that necessary?   It is an interesting question, as it calls into account how our economy works.   Some economists of yore speculated that farming was the backbone of the economy, and that everything else piggybacked off that.   Of course, in addition to food, people need shelter and clothing - and forms of transportation, and amusements, and bling, and investments, and so on and so forth.  But many of these things that make up the "backbone" of our consumer economy are things we didn't have (or need) in the past, and could do without today, if we put our minds to it.   Smart phones are handy, but if they were thought to spread AIDS, people would drop them like hot potatoes.   And apparently a similar thing could be said to be true of the airline industry.

It is akin to smoking.   Cigarettes were a billion, if not trillion-dollar industry at one time.  The major tobacco producers were like Gods - and powerful enough to quash any reports that their products were hazardous.   Their advertisements dominated the airwaves.  Cigarette vending machines were in every bar, restaurant, bus station, and airport.   Cars came with multiple cigarette lighters and ashtrays - sometimes one for every passenger!  And thousands, if not millions of acres were planted in tobacco, and many a farmer made their entire living off that one crop.

Then, in a matter of a couple of decades, smoking fell off the map.  Oh, sure, it is still a going concern today, and there will always be smokers among us - perhaps.   But it wasn't like the glory days, where people smoked cigarettes even on airplanes.   Today, smoking is so rare it merits comment when you see someone doing it - and that person is usually viewed as trash for doing so.   Back in the day, if you didn't smoke, you were thought to be some sort of "health nut".

It turns out, cigarettes weren't necessarily a big part of our economy - and one we could live without.  Believe it or not, people argued that farmers would go broke and restaurants and bars would close, if smoking were banned in public places.   This isn't about health, it's all about jobs!   Jobs - the new mantra since the stagflation era of the 1970's.  You can excuse anything in the world, if you can claim it "creates jobs".  It is, of course, a bogus claim.

And a funny thing - in New York City, the bars and restaurants didn't all close when smoking-while-eating was outlawed.   In fact, people adapted to the new order rather quickly.  Smoking - again - once seen as glamorous, is now seen as trailer-trash.

Could a similar thing happen to flying?   Probably not, although there are parallels.  When I was a kid, flying was indeed glamorous, as it was very expensive, and people dressed-up to go to the airport.  Well, people dressed-up to go grocery shopping back then.   But it was a high-class endeavor.  Today, the airplane has replaced the bus - and bus companies are going bankrupt as a result.  Flying on an airplane has become very, very unpleasant, even with smoking banned. And unless you are in first class, well, it is just trash.

But maybe that is why airplanes are flying empty today.   People stopped flying because the bulk of them had no real reason to do so.   When flying became cheap due to deregulation, union busting, and the ever-increasing number of seats jammed in, people flew more.  People who never flew before became regular fliers.  But if you think about it, few, if any, had a real need to fly, as much as a desire to.  Even business travelers today could probably get more work done online or via teleconference than by wasting hours in the air, at rental counters, and hotels.

Conventions are being cancelled over fears of this virus - which is silly.   But conventions in general are struggling, due to their high costs and decreased attendance.   Some major corporations are avoiding conventions for product launches, simply because their product announcement gets lost in the hoopla surrounding, say, the CES.

But getting back to recession, as I noted several times in the recent past, every car company in the world has forecast slower sales in 2020.  Many are devoting energies to bringing electric cars to market - an effort that may backfire as these flood the market and find fewer buyers in a depressed economy.   With the price of oil plummeting (and perhaps the price of gas to follow) the incentive to go electric may also fade - cheap gas kills the electric car.

So the auto recession - already bad enough because consumers are tapped-out in terms of debt - could get a lot worse, if this move to electric cars finds no buyers.   Tesla, in any event, may be due for a major correction, as the stock is wildly overpriced to begin with.  What happens when the market is flooded with similar cars?

All I can say is, the long-dreaded recession will be upon us, shortly.   We've lived in denial too long, and that will only make it worse.
Newer Post Older Post Home