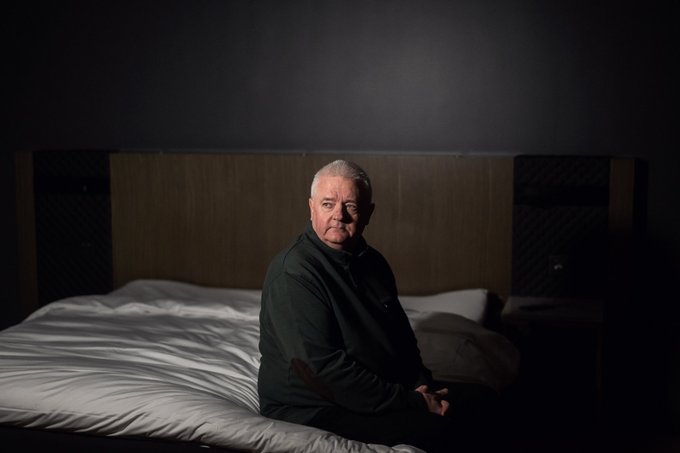 What's the deal with the photos in the New York Times?

A reader turned me on to this Twitter account entitled NYTimes GLOOM. The author has accumulated a collection of photos from various New York Times articles and it's almost hilarious how they all have the same sort of gloomy format.

Each picture shows a person with an expression on their face as though somebody had just shot their dog. They usually are staring off into the distance is if contemplating suicide or wondering when the jobs will come back to the finger-cutting Factory.

In classic Film Noir style, many have their faces partially shaded. All that's missing is Venetian blinds and the curling smoke of a lit cigarette.  Sitting on the edge of a bed seems to be a popular pose.

I'm not sure what the author's point is, only that it seems that the New York Times sets out to show things in a gloomy format, particularly when writing stories about us "Ordinary People." We are shown to be poor and destitute and desperate and sad.

I wrote about this before - how photographers go to places like Appalachia and show children with dirt smeared on their faces - I smell a Pulitzer!

What made me laugh out loud were two photos.  One was a sad-looking guy leaning against the tailgate of a brand-new Ford F150 Platinum Edition - a $70,000 pickup truck.  The horror of it all!  Another fellow seems to be leaning against the railing of a walkway on Jekyll Island, or some other beach resort location.  Again, people don't know how hard he has it.

We are being sold a narrative here - that America is an awful place and people are unhappy.  I don't buy it.  I think they write these articles first and then seek out people to fit the bill of their preordained narrative, sort of like how I was portrayed in the Wall Street Journal.  They sort of mixed up what I had to say to fit the narrative of their story.  They didn't even get my name right.   And that's alright with me, because frankly, I don't give a rat's ass.  But also, it was illuminating as to how the media creates news rather than merely reports it.

And there is a difference.