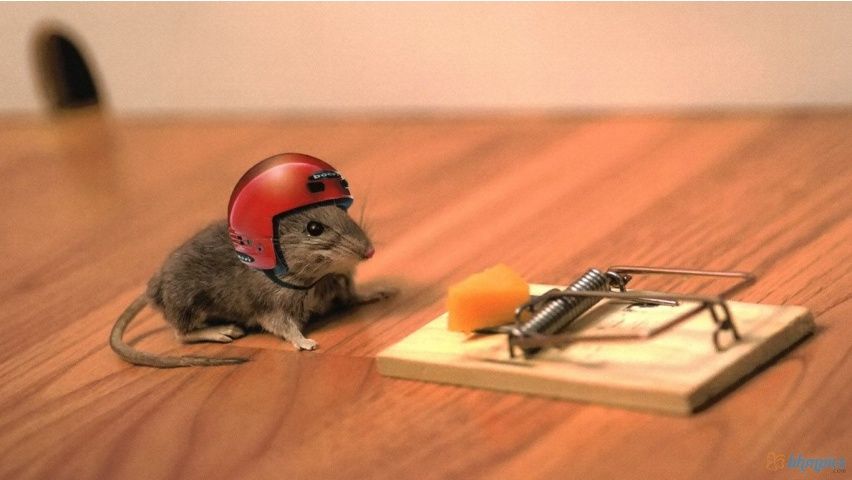 
Once upon a time, there was a mouse named Roderick, who lived with other mice near a small stream in the woods.  The other mice made fun of his name, but he didn't care.  He felt he had important things to do in life, he just couldn't figure out what they were just yet.

One day, he came upon a doll helmet that a child had discarded from their play set.  He put it on and it was a perfect fit!   "This is what I have been waiting for my whole life!" he said, "I'm going to be the Emergency Mouse and take charge in case of emergencies!"

The other mice made fun of him and told him he looked like a dork with the helmet on, but he just smiled and said, "Just you wait! When there's an emergency, you'll come running to me!"

The next day it rained and rained hard - harder that anyone remembered for a long time.  "An emergency!" cried Emergency Mouse, "To the rescue!"

And so he ran from mouse-house to mouse-house, to apprise everyone of the emergency, and to tell them to sit tight and wait out the storm.  "Why should we listen to you?" some said, to which he replied, "Because I'm the Emergency Mouse!"

"It's just raining" they said, "It will stop eventually."

"We don't know that!" Emergency Mouse nearly shouted, "and How Dare You question my authority!  What's wrong with you, anyway?  Mice could be drowning in this storm, and people like you just don't care!"


And sure enough, some mice did fall into the swollen stream, trying to cross it on a rotten branch, which gave way.  "See, I told you so!" said Emergency Mouse, "From now on, you have to listen to what I say!"


But they didn't listen and went on with their lives.  Emergency Mouse, on the other hand, kept finding new emergencies that he felt needed his intervention.  Later in the year, it snowed - an inch or so - and once again Emergency Mouse declared an emergency, and went from mouse house to mouse house, solemnly advising the mice how to survive this snow emergency.  Most slammed their mouse-doors in his mouse-face.  "Get a job, Roderick!  We know how to deal with snow, thank you very much!"

And so it went, throughout the year, with each new development being decried as an emergency by Emergency Mouse.  One day, a bulldozer came to the woods, to clear land for new houses for the humans.  They didn't bulldoze by the stream, but the ground shook and the mice, in terror, fled their mouse-houses until the shaking was over.  Once the humans left, the mice started to return to their homes.  Emergency Mouse stood in their way.  "It isn't safe to return to your mouse houses just yet!" he cried, "Until I declare the emergency over, you can't go back!"

"Get a life, Roderick!" one of the mice said, and they pushed past them to get to their mouse houses.  "But I'm Emergency Mouse!" he cried, "You have to listen to me, I'm in charge!"  The other mice laughed and ignored him.

Then one day, the neighborhood cat came a-calling, trying to catch unwary mice. "There's a cat!" cried Emergency Mouse, "Run for your lives!"  But the other mice had already seen the cat and had retreated to their mouse houses, leaving only Emergency Mouse standing out in the clearing.  The cat snapped him up in her jaws and chomped on his neck, snapping it.  His tiny toy helmet fell off, and the cat spend the next hour playing with the dead corpse of Emergency Mouse, until he got bored with even that, and dropped it on the doorstep of his owners, as a "gift".

Life went on by the stream in the woods, and the other mice soon forgot about Emergency Mouse, as they were too busy foraging for nuts and seeds. Whenever his name came up in conversation, the mice would shrug their shoulders and say, "What was the deal with him, anyway? I mean, what a weirdo!  He felt he had to be in charge of everything, but really accomplished nothing."

"Well, I guess that's what happens when you name a mouse Roderick." one said, and they forgot all about Emergency Mouse and his antics.