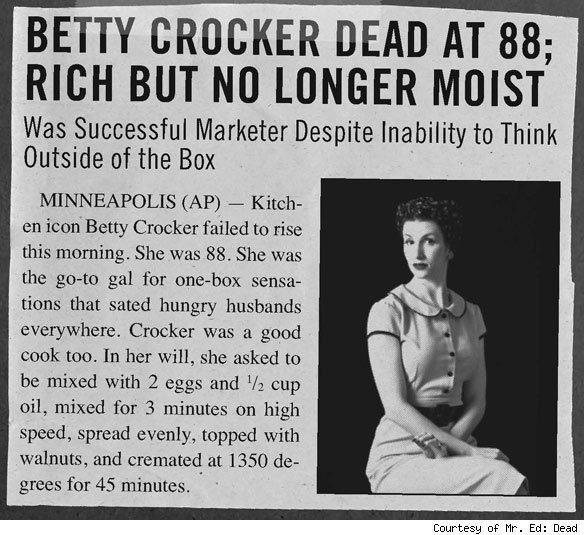 If you are going to tell lies about someone, why bother to print it?


I was reading obituaries the other day and saw one of someone I knew.  It was so full of horseshit, that I nearly fell out of my chair, laughing.  The euphemisms they used were astounding - as well as the outright lies.  Here are some examples, and the translations:

"Mr. Jones was adventurous and free-spirited" - he smoked an astounding amount of pot and got shitfaced every night and slept around.

"Mr. Jones was a community activist and believed in the power of community action" - he voted, most of the time, at least in some elections.  He would, however, bore you with his political opinions for hours on end.

"Mr. Jones was an avid hiker and cyclist" - he owned a bicycle (it sat in the garage with a flat tire) and occasionally walked he dog.  He wasn't in the iron-man competition or anything.

"His love for family and friends were a source of inspiration" - he was a tired old misanthrope who harbored grudges against almost everyone, would talk behind others' back at the drop of a hat, and despised his parents, children, and siblings.

"A celebration of his life will be held a the Presbyterian Church.." - Everyone will breath a sigh of relief it finally is over.  He rarely saw the inside of said church.

"In lieu of flowers...." We know you're not sending anything anyway.  It's OK.

Who writes this shit?  And why?   Funerals are for the living, not the dead.  And I am sure I am not the only one of the living to not recognize Mr. Jones from this description.  What is sad is that this obituary is all that will remain of Mr. Jones, years from now.  Very odd.

I guess we have some need to have these things. And what is often weirder is where they are published.   People will have their obituary published in the "hometown paper" even though they haven't lived in the "hometown" for over 20 years, and no one they knew there is still alive or lives there.

We get a lot of these on our island.  It is nice they publish them, but many of these oldsters are people who left the island a decade ago, when their health was failing, to live in assisted living or be near their children.   All of their friends are also gone or dead or both, and the folks living here, for the most part, have no idea who they are.   Very odd.

But I guess you have to publish these things somewhere.  Why not Obituaries online?  Wait, someone already thought of that one.   Why not just no obituary at all?   Why not?   Unless you are a pop star or Secretary of State, no one is going to remember you or really care about what you did in life.  That is the harsh truth of it, sadly.   Even your kids will forget about you, after a while.  Only the scars you inflicted on them will remain.

"When I die, and everyone who knew me has died, then it will be like I never existed"

Maybe that is one advantage to not having children - you don't walk around with a lot of pretensions of leaving a "legacy" behind you.  Parenthood tends to imbue an aura of immortality to some folks.  Although, as the obit below illustrates, sometimes the living have the last laugh. 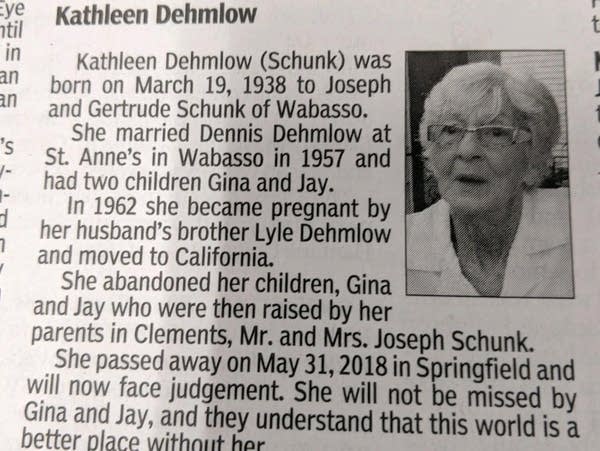 Not that they're bitter, or anything....

Your life should be more than just a badly written obituary - it is how you lived it.  Forget leaving a legacy - odds are, it ain't gonna happen anyway!  Obituaries are a waste of time - and way for people to harvest your data!
Newer Post Older Post Home