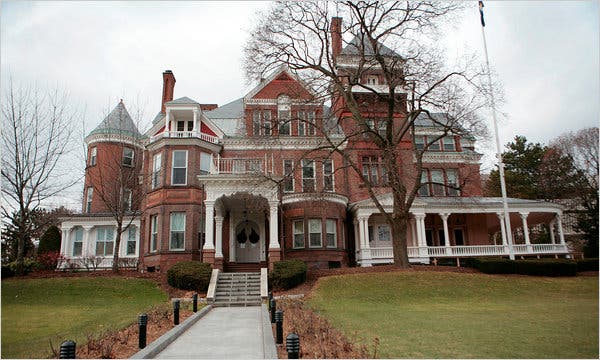 Expensive houses can be easy to acquire but hard to get rid of.

A reader writes asking whether they should sell their $1.7 million home and downsize to a $1.3 million home, cashing out $300,000 in the process. They're concerned it might be difficult to sell their property, and even a normal market this is true.

I resisted the temptation, as I made more money, to buy a fancy house, as the amount of my credit I would tie up in a personal residence could be used to buy an investment property instead.  Unlike a personal residence, an investment property could generate monthly income, a nice tax deduction, and possible capital gains, over time.  If I bought a million dollar house, I would not have been able to buy my office building, duplex and condominiums - all of which generated nice capital gains and tax deductions for me - as well as positive cash-flow rental income.

Before going further, however, I should qualify what an "expensive house" is.  It depends on the neighborhood and region.   In parts of California, a million bucks buys a starter home.  In Vancouver, a tear-down.   In the rest of the USA, however, it is considered a mansion, as the average cost of a home in America is about $200,000 or so.   So whether our readers' house is "expensive" or not depends on the region.  I suspect, given their area (California) their home is above-average, but not an outlier.   But nevertheless, this gave me the idea to address this issue, even if it doesn't directly apply to our reader.

There other problems with very expensive homes.  As I noted before, if you buy more house you're just increasing the amount of money you spend in order to live.  Expensive houses have higher property tax rates - often extraordinarily high in some States - as well as higher insurance rates. Utility bills are also higher, as well and repair costs.  That fancy "rich people's roof" with the steep pitch and numerous valleys will be expensive to re-roof when the time comes.

Of course, Trump's new tax bill has hurt a lot of homeowners who have expensive properties. This new tax bill limits the amount of money you can deduct for state and local taxes.  If you have a large five-figure property tax bill, you can only deduct a small portion of it on your income taxes.  Yet another reason not to own an expensive home!

But beyond that, expensive houses have other problems as well. The audience for high-end residences is very small.  If you want to sell a middle-class home in a middle-class neighborhood near a major metropolitan area, chances are you'll get multiple contract offers over a weekend, in a brisk market. Even the slow market, they are always people in that price range who are looking for a home, or even investors were looking to buy it, to rent it out.  Ordinary homes are easy to sell.

But very expensive houses are harder to sell because the audience for these houses is much smaller. Supply and demand rears its ugly head once again.  Since they cost so much, they likely won't generate a positive cash flow, so investors shy away from them.  You have to wait for the right person to come along who has that kind of money and just looking for the exact kind of house you have.   As a result, high-end homes to sit on the market for a long period of time - months, not weeks, sometimes years.

This is assuming, of course, that the house is somewhat normal.  Many people in the higher brackets have lots of money to spend (so they think) and thus make their homes quirky - installing an underwater pool table in the living room, for example.   MC Hammer, when he made his initial fortune, blew it on an iconoclastic mansion in a middle-class neighborhood in Fremont, California. Marshal Mathers built an edifice across the street from the trailer park he grew up in.  Elvis remodeled a former girl's school, installing a "jungle room" and television shooting gallery.  None are easy to sell.  A lot of the houses of the super-rich turn into museums, as a result.

But even on a more pedestrian level, rich folks' homes can get quirky, and quirky doesn't sell.  A friend of mine bought such a home.  The previous owner had been kidnapped, so they had installed a "safe room" with bulletproof glass and security cameras.  A little quirky, but easy to remodel around.  Others, less so.  Another friend turned a ski chalet into a medieval castle.  Nice looking, but you have to hope the buyer is into crenelated parapets.  So bear that in mind before you buy such a house, or if you are trying to sell one, or thinking of remodeling.

Of course, none of this is helpful to our reader, who is already bought their house. They want to know if I think that the timing is bad to try to unload the house. And this may be the case.  A friend of ours is trying to sell her house after her husband died.  In our smaller market she is offering a house at over $600,000 which is a little on the high end, believe it or not, on our little resort island.  Cheap living here, relatively speaking.  Although on the mainland, a similar house would sell for under $200,000.   Funny how that works, eh?   Downsizing really works when you move away to a cheaper area.

Sales of homes on our island have been brisk in the last two months. What's even more amazing is people are buying the houses at asking price, often a half million or more, and then plowing another quarter million into them right away.  The punchline is, they are only using these houses as weekend retreats, not primary residences. So clearly, someone has a lot more money than we do, and has a lot of faith in the future of our island.

(Actually, this is not unexpected, as the State of Georgia has plowed a lot of money into rebuilding the infrastructure of the island.  When we moved here more than a decade ago, I called it "Georgia's abandoned island" as many of the hotels had been torn down and never replaced.   Today, there are shiny new hotels, a new convention center, a new "downtown" shopping area, and new homes being built.   Many of these new weekend warriors are flying here in their private airplanes - we have a small strip that can accommodate smaller aircraft, and even the occasional small jet.   As the world becomes more populated, it was only a matter of time before people realized how overlooked this island was - which is why we moved here when we did).

The last such house to sell it is immediately behind us, and they're already starting on remodeling and remaking the home. But since they closed on that house, the economy has somewhat cratered, or I should say, has cratered.  I'm wondering if they're having second thoughts about their purchase.  My friend who is trying to unload her house for over $600,000 is going to find her timing is a little bit off.  If she had put it on the market back in December, it probably would have sold quickly but now as the snowbirds head north and as the Corona Virus panic kicks in, it may be very hard to sell the house, indeed.

The coming recession was going to be bad enough, but this Corona Virus thing is really going to kick it in the ass. So many people are going to be laid off or have their hours reduced as more more places close or cut back. The effect may only be temporary - two or three weeks at the most.  But this can put a huge dent in the national economy.  We're basically losing one month of production or nearly 10% of our GDP, just because of this virus.  We would have been in the shitter anyway, the way things were going.  This is making it ten times worse..

It could be we are on the cusp of another housing crash as in 2008. And for those of us who are not mired in debt and it a good cash position, this is good news. In the coming months or maybe even years, significant bargains may be offered in real estate, as well as stocks and bonds.

Again, this isn't helpful for our reader.  But I really don't know what to say otherwise.  Even in a good market, expensive homes will sit for many months - if not a year or more - waiting for the right buyer.

Given the current economic conditions, it can only be worse.

My only other thought is, cashing out only $300,000  on a $1.7M house in a downsizing doesn't seem like a lot of money, proportional to the overall value of the house.   That's a lot of money to me, but to someone living in a $1.7M house, maybe not so much.  Factor in the transaction costs, and there is a lot of overhead involved for not a lot of payout.

My personal "downsizing" goal (on a much smaller scale, of course!) is to sell our house for $500,000 or so - maybe 5-10 years down the road - and move into a condo or townhome or whatever that we buy using the proceeds from the sale of the condo - rolled over in a Starker deferred-exchange.  By converting the investment property into a personal residence, we avoid paying capital gains tax on the investment property - nice work if you can get it!

But today, I think we would be hard-pressed to sell in this market.  I think it peaked in January or February of this year.   So we'll wait a few more years.  We weren't quite ready to move, anyway, but can see that there will come a time when we will want to - and we will be prepared for it!

The very, very rich don't care - they build what they want and don't expect to break even - a house is an expense to them, not an investment.   The real risk is to upper-income "strivers" who stress themselves financially to buy their way into the country club - folks such as my parents, who were stressed financially, in retrospect, to buy their way into fancy neighborhoods.  Fortunately, they lived in an era before housing bubbles were common.
UPDATE:  During the summer, there was a boom in sales here on the island. Folks from Atlanta panicked and paid over-asking price for a getaway from virus madness.  It seems this boom has already tapered off, and with news of a vaccine, may be gone for good.  It was fun while it lasted!  I should have sold when I had the chance!
Newer Post Older Post Home