A New Age of Elightenment? Or A New Dark Ages? 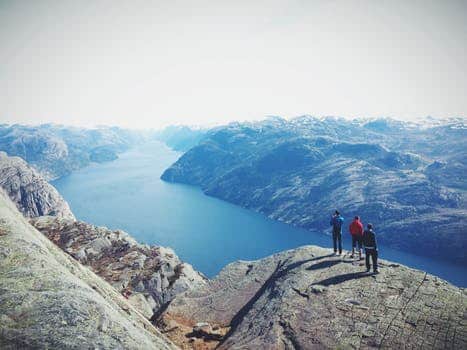 We could be on the brink of a new age of enlightenment, or the edge of an abyss of despair.  Could go either way.  History suggests we shouldn't be too optimistic.


For some reason - perhaps catastrophe theory - our civilization advances in fits and starts.   Mankind advances, in terms of technology, governance, intellect, and freedom - and then retreats back to a level of superstition, distrust, warfare, servitude and primitivism for an even longer period of time.

Perhaps this is part of the cycle of man - ages of enlightenment are eras where crops are plentiful and commerce is strong.   People then over-populate, there is a drought for several years, and suddenly these great institutions of civilization come crashing down.   Population pressures and competition for resources replace bold ideas about egalitarianism.

Perhaps civilization and liberalization are something that can only be digested on a full stomach.  The veneer of civilization is awfully thin.   We like to think of ourselves in the West as being culturally and intellectually sophisticated.  But once your life is reduced to a daily struggle for calories, your brain will revert to lizard mode.   Things there were once unthinkable become everyday events.

Civilization is a luxury that only the well-fed and well-off can afford.

Perhaps the best example of this cycle is the dark ages that followed the decline of the Roman Empire.   The Roman Empire was one of those pinnacles of civilization, although barbaric by today's standards - legalized slavery, conquest of nations, and barbaric gladiatorial games where people fought to the death for the amusement of citizens.  Nevertheless, by historical standards, the Roman empire represented one of these peaks of civilization, spreading written language, culture, trade, and law throughout what was the known world at the time.

But perhaps it was destined to fail.  Any civilization based on conquest is, by definition, going to produce an awful lot of discontented people who will eventually revolt when the time is ripe or opportunities exist. When people have nothing to lose and nothing invested in their own civilization, they will let it collapse from within.   That is something every 1%'er should realize while admiring the view from their $100M apartment on Fifth avenue.   Those little dots down there protesting may eventually figure out how to use the elevator.

In modern times, we saw this with Weimar Germany.  For a brief period after World War I, democracy flourished in Germany, and liberal values took hold.   It was the jazz age, and people felt liberated. Gay rights groups, for example, flourished, and there was a new level of acceptance.   Communists felt that revolution could take place (and sadly, it would) and the "workers" would control the "means of production".

The economy, however, was in ruins, and the stock market crash of 1929 certainly didn't help any.  Oddly enough, the Nazis took power during a period of mild economic revival, mostly by convincing people that things were worse than they really were and using the staged street-fighting between Communists and Fascists as an excuse for "Law and Order."   Stop me if this sounds familiar.

"Make it stop!" people seemed to say, much as those in Kabul did, when the Taliban took over and put an end to the incessant fighting between warlords, that had destroyed the city.  The greatest pleasure in life is the release from pain, and people will be grateful to you if you can remove pain from their lives.  The torturers in the basement of the KGB building knew this - they still know it today, under a new name, of course.

So Herr Hitler comes along and says he will fix things up in a jiffy and put those nasty Communists in jail, so there will be law and order again on the streets, and people go along with this - at first.  Well, some are die-hard true believers, even to this day.

Liberalization can only be digested on a full stomach.  And maybe that is why in the West, liberal values have taken hold.  Even if you are a "conservative" in America, your values are considered "liberal" by world standards, which is why the Republican Party once had a "Liberal" wing - one that believed that businessmen, using scientific management principles, could make government strong and efficient.  This was before the modern era where the GOP declared government to be the enemy - something that should be destroyed or at least "drowned in bathtub".

America, in the last half-century, has seen a move towards liberalism that has not been seen in the history of mankind.   Today, we are more concerned than ever, with issues like equality and liberation.   Women have rights, in theory, nearly equal to that of men - something revolutionary in a world where, until very recently, women were considered property or a mere nuisance - and are still considered such in much of the world today.   Odd thing, when you think about it, when they are responsible for the continuation of the species.   Men, if anything, are the disposable commodity - as many Lesbians will be quick to tell you.

And speaking of Lesbians, gay rights have reached a pinnacle in recent years.  Things I never thought would happen in my lifetime - or even a Century beyond that - are accepted as new norms - gay marriage, gays having children, gay rights.   Things like "transgender" rights are an issue today - we are seeking out smaller and smaller groups of sexual minorities to cherish and enshrine, it seems.  The big "thought crime" you hear about today is to call someone by the wrong pronoun, which apparently should be dealt with by dealing out the death sentence.   I just don't get that - if someone looks androgynous, how can you be blamed for guessing their gender wrongly?   Maybe we all need to wear name tags with our gender pronouns on them to avoid confusion.  Maybe not.  Maybe people need to stop being so hyper-sensitive about "micro-aggressions" and worry about the real aggression in the world.

It seems we have woken up from a long dream, with regard to a lot of these issues, though.  The Black Lives Matter protests - by black people, originally, not the co-opted white version today that is being put on by narcissistic young people who think that the protest is about them - brought to the fore the basic issue that although we have made a lot of progress since 1865, black people remain stubbornly locked into the lower classes, in terms of economic advancement and treatment by society.  And a lot of people are asking, "Gee, why is this?   And why hasn't anyone really done anything about it?"

Like I said, we could be on the brink of a new age of understanding and enlightenment.   Or on the edge of the abyss.

Perhaps one reason the Wiemar Republic collapsed was that they were viewed as weak and indecisive, more concerned about the needs of special interest groups than society as a whole - at a time when the whole society was suffering.   In such times, people look to strong leaders to "get things done" - which was a movement at the time, worldwide.  In an era of Kings and Queens, Dictators just seemed like an alternative form of government.   Studebaker even named a car the "Dictator" as they already had a "President".    Only later would they recoil in horror at that marketing decision.

Today we are facing real crises in the economy - which was due for recession before the virus took hold.   The virus is only to going to take a mild recession and make it much worse.  And bear in mind that in many instances in history, these dark ages or ages of retraction were often accompanied by plagues and epidemics.   They might not have been the sole cause of such dark eras, but could have been the one thing that pushed civilization over a tipping point.

Revolutions often collapse because of their own silliness - silliness that can become deadly.   Mao's "cultural revolution" nearly destroyed China and was almost a parody of itself - a tragic parody.   Today, we are seeing just causes hijacked by wealthy young white people whose only agenda is silliness - fighting the police and each other, out of little more than mere boredom.    The rights of sexual minorities to just be left the hell alone has been hijacked by some attention-seekers who do not want to be left alone but want to be celebrated and force others to accept them.   This will backfire in a big way.

Like I said in an earlier posting, if you want a good conspiracy theory that's it.   The BLM movement seemed to have a lot of inertia and backers from both parties.   Real change seemed just on the horizon.   Then white people got involved, drove the whole bus off a cliff and here we are today, with Americans clamoring for "law and order" and the rights of blacks set back, yet again.  Every time it seems blacks are to advance, rioting breaks out and they are once again pushed back into their ghettos, which are now smoldering ruins.   If that isn't a conspiracy theory, I don't know what is.  And shame on these white kids for taking over a cause that is not theirs to lead.

Dawn of a new age?   Or over the precipice?   If history is any guide, I suggest the latter will be more likely - and this is something that has worried me for more than a decade now, as I have mentioned in previous postings.  When things go my way too much, I get nervous, as life just isn't a string of stoplights turning green as you approach them.   Whenever there is social advance on one front, there is a corresponding push-back.   And when one "side" advances far, it is like a rubber-band stretching out, further and further.

Eventually it snaps back - with a vengeance.

We saw this in Germany, in less than a decade or two.   For a few short years, liberalism ruled in Germany and it seemed they were on the brink of a new age of enlightenment and Democracy.   Then the concentration camps sprang up.   Then the gas chambers.   Then the ovens.   Shit can get really, really bad, in a real hurry in this world.   And in fairly recent times, too.   Look what happened in Cambodia, for example.   An entire country torn apart and millions killed - and it ain't over yet.

The stakes are very real - civilization itself is at stake.    And yet, we are told the pressing issue of the day is whether Bradly Manning, a traitor to his country, is called by the right pronoun.