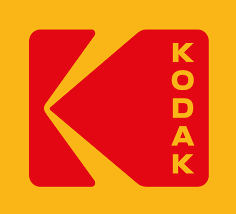 When someone can't tell you what their business model is in ten words or less, watch out.


In the last few years, I have received a number of emails from readers asking me about Kodak stock. This tells me that somewhere on the internet, someone is hyping Kodak stock as some sort of get rich quick scheme.

I was born in Rochester New York, the hometown of Kodak. My Dad was an executive at a company called ITEK, which some wags said stood for "I Took Eastman Kodak" because of some disputes over intellectual property.  I think they made high speed cameras for U2 spyplanes or spy satellites or something along those lines.

Back then, Rochester was a company town, and the company was Kodak. They were the six hundred pound gorilla in the camera business and film business. It wasn't until the 1970s that Fujifilm started to take hold and take over a larger and larger share of the market. Kodak's misadventure into instant cameras ended up with one of the largest patent infringement lawsuits in history, and really set in motion the modern patent era.

But digital cameras were the downfall of Kodak, even though Kodak offered its own line of digital cameras (which apparently were not very reliable, although I had two of them).  Smartphone cameras were the nail in the coffin.  It seemed to happen almost overnight. Suddenly the Fotomat booth disappeared from the strip malls, and the local drug Store stopped selling and developing film. Film cameras went away rather quickly as digital cameras became easier to use and had longer-lasting batteries and higher resolution.  Kodak declared bankruptcy.

The company reorganized and today they are doing... I'm not sure what they're doing. In fact, when some people tried to explain to me what Kodak does for a living, and they couldn't explain it to me in ten words or less, I knew something was up.

This Wikipedia entry says that:

I am not sure what any of that means, only that it sounds like a pretty competitive number of businesses they are in, that don't seem poised to take off like a rocket, in terms of profitability or everyone having to have their product.  Film is dead.  Printing is dead. Paper is dead. These are dead and dying businesses with no spectacular future in them.  About as exciting as selling PC's these days.

This isn't the next Microsoft or Apple, but rather a rather typical commodity business.  The P/E ratio and earnings per share are nothing to write home about.  Why on Earth would anyone hype this stock? It is about as exciting as General Motors.  They make things - commodity items that other people make as well, at very competitive prices, with very narrow profit margins. There is no secret sauce here, no "moats" as Warren Buffet would like to have, no.... nothing.

Today, Kodak is a subject up some controversy as they supposedly got a huge loan from the government to produce "drug ingredients" whatever those are, which seems like an interesting thing for a former film company to be doing. But apparently, prior to the announcement of this government largess, the stock started trading rapidly which totally reeks of insider trading.

Now it remains to be seen whether they get this government loan or not, or whether they intended to get it all along, and perhaps the whole purpose of the thing was just merely to manipulate the stock price.

Like I said, when several readers asked me about Kodak stock and whether it's a good investment, I get suspicious that something was up - and that something may be stock manipulation and a pump-n-dump scheme.  I don't give stock tips here and I don't suggest that people invest into things that are hyped on the Internet or on a financial channel. Usually, after something's gone up in value, it's too late to invest in it. Also, the people who are hyping these stocks are the ones who are buying them before you do and making a lot of money off of you.  If you hear about some investment on television or the Internet, chances are, it is too late to invest in it. 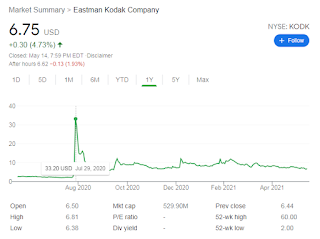 UPDATE 2021:  Here is the stock price from 2020 (when I wrote this blog entry) until today.  As you can see, on July 29th, the stock price peaked at $33 a share, and then went back to languish in the sub-$10 range, where it remains today.  Clearly somehow this stock price was manipulated, and it was no coincidence that several readers (or "readers") asked me about this stock at that time.  Someone was hyping this stock!
* * *
One thing is clear:  In recent days, someone made an awful lot of money selling Kodak stock for as much as $33 a share, when it was trading days before at $5 a share.   And the people who bought at $35 a share, are now looking at a 70% loss on their holdings.  This has all the hallmarks of a classic pump-and-dump.

These recent events make me wonder whether Kodak exists simply as a placeholder for other people's fantasies.  In other words, it's just a pump-and-dump company whose stock price can be hyped with the announcement of some new product or new government contract, regardless of whether they follow through with any of this.  Or it is possible outsiders are using the company as part of their own schemes.   Maybe someone in the Trump administration leaked out this loan information - Eric!

If that's the case, then it is the perfect modern company for Trumpian America - a company with no substantial business plan whatsoever other than to make money for the insiders by manipulating the stock price.