Why the EU is Failing 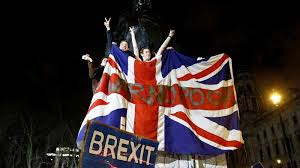 Brexit is just a symptom of a larger overall problem.


For years, many have hoped that Europe could come together as some sort of "United States of Europe" as for centuries, Europeans have been killing each other in various wars, and of course today, due to soccer hooliganism.   The common market was a first attempt at trading between nations without tariffs and borders - to create an economic powerhouse that would rival the United States of America, and today, China.

But the final attempt at integration - the EU - seems to be running off the rails.   The UK, which never was fully committed to the concept (balking at the Euro) has bailed on the deal, and no doubt others will follow.  Worse yet, it looks as though some newer members, such as Poland, just don't get the whole concept and might have to be booted out.

The United States became an economic powerhouse in part because it is such a large country, and until recently, you could travel from "State" to "State" (or Commonwealth, as in Massachusetts, Virginia, et al.) without a passport and settle anywhere you wanted to - or could afford to.  Even today, though, the various States can't stop you from entering due to the Corona Virus - all they can so is advise you to quarantine, and in some instances, enforce it.  Interstate commerce, indeed, even international commerce, continues unabated.

We had the advantage over Europe of sharing a common culture and language, at least at first - which is one reason, I think, over the years, people have reacted negatively to new waves of immigrants, convinced they would create a culture-within-a-culture, as many are alarmed about today.   But left to their own devices, most immigrants in America blend in within a generation or two, and homeland languages and customs slowly go by the wayside.  Well, maybe not today, when our identity politics friends encourage people to live in separate cubbyholes.

We are seeing this across the world - dead languages or languages that were nearly dead, being revived as part of a regional sovereignty and identity.  French was on the ropes in Quebec before the separatist movement.  Today, they speak a charming textbook version of French, which I can more readily understand, being a "C" student.  Folks from Paris think it is an abomination.   Young people in Wales are re-learning Welsh.  Scottish identity is a big thing these days.   Everyone wants to have their own country, about three-feet square, surrounding them.   They even have a name for it in the States - "Sovereign Citizen" - but of course it is all bullshit.  We all belong to one country - one world, one race.

Of course, things didn't initially go smoothly for the USA, which is why it is not unexpected that things are not going well in the EU.  We started out with an "Articles of Confederation" which was a weak form of central government (sound familiar, EU fans?) that ceded much power to the States. After a few short years of that nonsense, we scrapped that for the US Constitution we have today.

But the hard times weren't over yet.  The bloodiest war ever fought by the US, killing more people than all other wars we fought in, combined, finally put into place the idea of a powerful central government, and killed off the "States Rights" movement pretty much for good (but like a bad penny, it keeps turning up every so often).  Yes, the Civil War was about slavery - the "State's Rights" to legalize slavery in their State - and expand it to new States being formed.

Since then, our Federal government has increased its scope and power, much to the distress of some folks who want a "do over" on that whole Civil War thing.    But we do have a national set of standards and laws that apply to every State, with the Congress using the cudgel of the power of the purse, to coax States into complying with various laws.   There are still a few variations between the States.  Florida, for example, doesn't require you to wear a helmet on your Motorcycle.  That sort of pretty trivial things.

So, it took only 200 years or so, the bloodiest war in our history, and quite a few false starts, but here we are today - and the job isn't over yet.   Europe expected to do this in a few years?   With everyone speaking a different language and having different cultural values?   Oh boy, what were they thinking?

And sadly, the whole point of an EU was to avoid these nasty little European wars that seem to break out every few decades, and now it seems we are heading for just that.

Of course, the problem is, the original member States at least had some cultural values in common - religion, and a few core "romance" languages.   Some of these new States (or wanna-bes) have different ideas, and once again, "States Rights" rear their ugly head.  The idea that human rights have to be consistent from State to State is something that is taken for granted in America - and much of Europe.  Poland seems to have other ideas.   Europeans criticize our antiquated and oddball election system, but the Poles have us beat (well they have the opposing party beat, anyway).

The cure, of course, is what took the United States 200 years and oceans of blood to figure out - you have to have a strong central government with a standard set of rules for all the States. Yet the rallying cry of the Brexit folks is that "Brussels" (their version of "the swamp") is the problem, what with all the regulations and so forth.  This is the exact same thing rural rednecks with "TRUMP 2020" signs on their pickup trucks say.   In fact, the parallels go further, all the way down to oddball leaders with piss-yellow bad comb-over haircuts who could stand to lay off the fast food.  Trump or Boris Johnson?   What's the difference?  By electing Boris, the Brits have given up all right to any criticism of the US, at least for the time being.

Same shit, different country.  Only the real problem for the EU is not that poor Southern States are seceding from the Union, but rather one of the principle members.  It would be like if, in 1860, New York State decided to secede from the United States over the issue of slavery. The whole damn country would have fallen apart.  We'd be singing "God Save the Queen" by now, as those wily Canadians would no doubt taken advantage of us and invaded (the Northern border of the US is ringed with old forts to thwart Canadian aggression, as did occur in the war of 1812).

So yea, Brexit is a total shitstorm.   Not only will it wreck the economy of the UK (when a pissed-off EU decides that a trade deal would only reward Boris) it will wreck the political future of the Union itself, as the power of the UK cannot be brought to bear to bring into line some of these other EU newbies who are off the leash.  One by one, the more powerful countries will leave, until the whole thing is a smoking mess.  And at that point, no one wins.

Yes, the EU had its problems.  So did our country, early on.   But if you stick around and try to solve those problems, it is a better approach than taking all your marbles and going home to play with yourself.   Which might be all the UK can do at this point - play with itself, in both senses of the word.
Newer Post Older Post Home